The State in North Africa After the Arab Uprisings. An Interview with Luis Martinez

Luis Martinez is the author of The State in North Africa. After the Arab Uprising, published by Hurst and Oxford University Press on 30 January 2020. Martinez answers our questions about the situation in the several countries that form North Africa, following the popular protests that started in December 2010 in Tunisia.

You show in your book that Morocco, Algeria, and Tunisia have followed different paths in the past to answer claims or demands expressed by a large part of the population, and in particular by youth, and to reinforce the feeling of national unity and social cohesion. Results have been disappointing. Can you tell us about how these countries have approached this work?

The struggle for independence encouraged the development of a national conscience and united territories around the new states despite some resistance. In Tunisia, H. Bourguiba launched an “authoritarian modernization” in the name of the legitimacy given to him by his status of “supreme combatant”. The reforms of the education system and religious institutions made the new identity of post-colonial Tunisia. In Algeria and Morocco, different authorities framed the development of nationalism. Faced with a weak sovereignty in some parts of the territory, military authorities in Algeria and the royalty in Morocco encouraged feelings of national belonging by favouring the fusion between state and nation, at least in discourse. In Libya, Idris’s monarchy (1951-1969) institutionalized the fragmentation of the territory and the plurality of national identities by instituting a federal decentralized state favouring primary communities of belonging.

In the 1960s, questions arose concerning North African states’ capacity to make their citizens live together. Once the colonial state had been overthrown, post-colonial states had to pursue the making of a nation-state despite weak resources and know-how. The establishment of authoritative political systems was presented as a way to transform existing societies into civil societies. For nationalist elites, the societies they had inherited were implanted with the seeds of chaos and violence; the populations of territories that needed to be administered resisted any centralist Jacobin and Nasserian vision of the state. Inhabitants of the Rif region, Kabyle, Imazighen, and Tuareg have been the figures of resistance against the centralized state in gestation, from Morocco to Libya. Nationalist leaders have worked on the assumption that “the modern state makes the nation” and have considered that they have had to free the people from its many “historical flaws”.

Yet North African states have not exploded like Yemen or Iraq. Libya did cross the line into civil war; in Tunisia, democracy seems extremely fragile; following Bouteflika’s forced resignation due to street protests, Algeria’s future appears unsure; the situation in Morocco remains unstable.

How would you analyse the responses of these states to the problems they face and more generally to the way they fight against those who aim at destroying them?

The authoritarian design of states in North Africa has shown its limits during the protests that started in December 2010. Claims for better governance, increased justice, and solidarity have destabilized those authorities who had not anticipated the mobilizations. The uprisings have forced states to launch deep transformations in order to guarantee national unity: decentralization reforms in Morocco and Tunisia aim at bringing the states and their citizens closer; claims for a federal state in Libya show the need to respect territories and local powers that have suffered from Ghadaffi’s authoritative regime. Democratic claims are part of the people’s will to have political institutions capable of representing them and able to control the state’s expenditures. For decades, citizens have denounced the waste of public funds and corruption, as in Algeria. In vain.

Today, the Hirak movement is akin to a “citizen uprising” demanding radical transformation of the Algerian state. Arab revolts challenge states and remind them that they need to transform to serve the general interest to prevent their destruction by forces that want to deconstruct the nation-states that were born from colonization.

Does the fact that many youth take part in jihadi movements mean that states have failed to build or maintain a feeling of national belonging? How can North African states answer such threats?

In a way, the Arab uprisings have helped jihadists take their revenge. The overthrow of Ben Ali’s regime and the fall of Gaddafi’s Libya have translated into the liberation of thousands of Islamic prisoners, among whom there are many jihadists. Organizations such as Ansar al-Sharia and the Islamic State have taken advantage of the weakness of regimes in transition and have sought to impose themselves in urban spaces freed from security forces. In September 2015, Islamic State leader in Libya Abu al-Mughirah Al-Qahtani called “the Muslims” to join him in hegira in order to consolidate the califate and informed them that he needed staff to administer the territory. His call was successful: between 3,000 and 6,000 combatants joined the organization. Tunisia provided the greatest contingent. This phenomenon alerted authorities worried by the terrorist threat.

Border control is the states’ primary answer. In fact, pressure by the international community aims at reminding political regimes weakened by “Arab springs” that border control is an act of authority. From Tunisia to Mali, such control is the symbol of a will for the return of the state. The Tunisian national guard and the Algerian national gendarmerie have established a “shared experience” program with positive results. In these early years of the twenty-first century, the fight against a “retrograde mentality” has disappeared; it is replaced by politics of deradicalization. The thousands of young North African men and women who have joined the ranks of jihadist organizations like Al Qaeda and the Islamic State represent a major challenge for the states of the region. 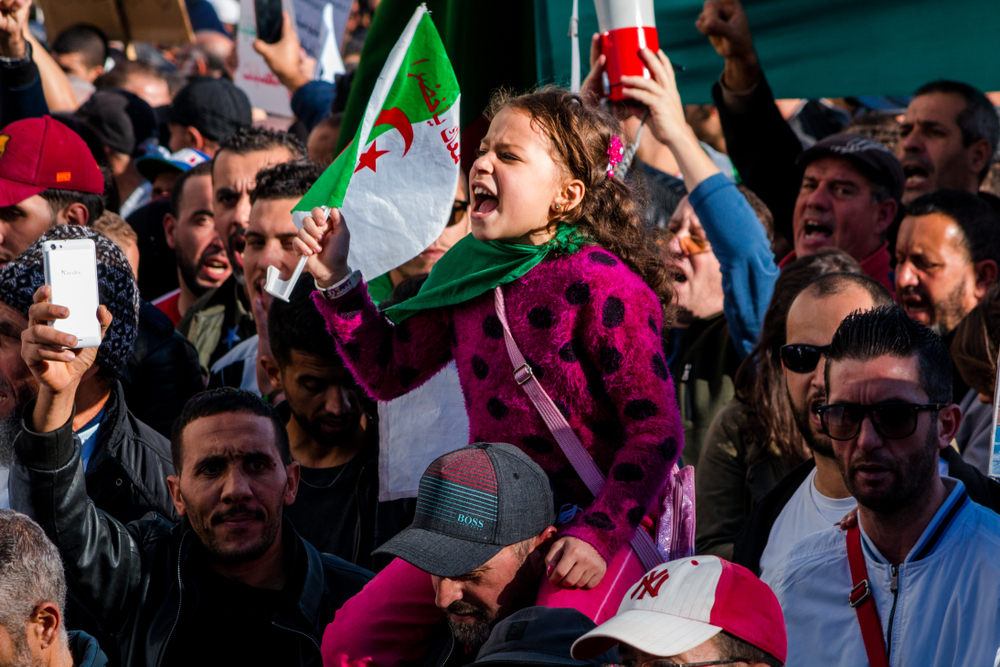 Abdelmadjid Tebboune has just been elected President of the Republic in Algeria. How can the situation evolve in the near future?

There are two possibilities. The first is that the crisis worsens, with a background context of a gloomy economic situation. Let’s not forget that Algeria is a rentier economy in which oil revenues guaranty two thirds of public expenditures. Redistribution has become more difficult with the fall of the price of the oil barrel and today there is no public money left. A large majority of Algerians are becoming poorer and poorer while others get richer and richer, a situation that has become unacceptable for the population. There is a risk of anger exploding and of demonstrators requesting full democratization of the system. In this case, nothing guarantees that the streets can avoid violence, and that the state will not increase repression.

A “citizen insurrection” in the early days, the Hirak movement has now become close to a revolutionary movement that asks for a radical transformation of the Algerian state and the departure of the military: “the army must go”. However, the Algerian army is not embodied solely by Gaïd Salah, its Chief of Staff; it gathers thousands of Algerians and it is part of the history of the country. I am not sure Hirak has assessed the ratio of power between the army and protesters well enough. The military is convinced of having answered to the people’s request by accepting the end of Bouteflika’s rule. At least, the army and street protesters agree on that. However, no dialogue seems possible today because for the army, there is nothing left to negotiate with the streets.

The second possibility is more optimistic: the authorities choose dialogue and set up a process to make it work, through political parties for instance. This would attest to the fact that the new President of the Republic has leeway indeed, and would give the protesters some representation beyond the streets and beyond Hirak. Additionally, it should be noted that the international environment has changed a lot since the early days of the Arab Spring and that foreign countries are not obviously in favour of a change of regime in Algeria. Algiers is a major element of regional stability in the Sahel and the fall of the regime would have catastrophic consequences in that part of the world.

Does the electoral victory of Islamist parties in several Arab states sound the death knell for the future of Arab uprisings?

I don’t think so. The Arab uprisings have mobilized (and still do) all actors of society, including parties and Islamist movements. Just like democrats and human rights defenders, Islamist parties and groups have been denouncing the authoritarian drift and economic predation for decades. From Morocco to Egypt, Islamist parties represent leading political forces. Just like nationalists, they are judged, politically, on their capacity to respond to the socio-economic problems of the population.

Can you tell us a bit about the relationships between North African states and their neighbours, in particular states from the Sahel region?

The fall of post-Gaddafi Libya opens a new strategic reflection indeed on the relations between North African states and Sub-Saharan Africa. For Maghreb political leaders, these relations mean growing military, economic, and religious commitments that change the nature of their relationships with Sahel states.

The two regional powers—Morocco and Algeria—act in Sahel with the conviction that the longer France will be present in this region of the world the more the people will rebel against the former colonial state. Morocco acts as a benevolent power concerned about economic and religious issues, whereas Algeria displays its concern about respect for sovereignty in the Sahel region and aims for the development of “African” solutions. So, while the—military—image of France in the region is deteriorating, that of Morocco and Algeria is improving.

The French version of this book has been published by Presses de Sciences Po.