Questioning the Arab Revolutions in light of the “revolutionary moment" 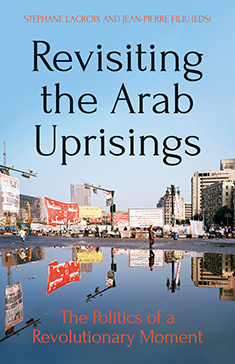 Jean-Pierre Filiu and Stéphane Lacroix have edited a volume entitled Revisiting the Arab Uprisings: The Politics of a Revolutionary Moment in CERI-Sciences Po’s series with Hurst and Oxford University Press. We are interested in knowing what makes this new volume different and worth of great interest in an already rich literature on Arab revolutions. The two editors and their contributors offer, indeed, the keys to a different analysis of Arab revolutions. One that focuses on the future rather than on the causes, on the dynamics of transitions rather than on the potential foreign responsibilities.

Since 2013, there has been a double/two-headed trend, of chaos and civil war, on the one hand, and the resurgence of forms of authoritarianism on the other. Most of the research carried out on the region since then focuses on this duality, but this book aims to bring back the focal point on the transitions, which you call “revolutionary moments.” Could you clarify what you mean by this concept?

We would like to state at the outset that our use of the term “transition” is not intended to reopen the debate on the vices and virtues of the “transitological” paradigm that had developed in political science in the 1980s and 1990s, following the waves of democratization in Latin America and Eastern Europe.
For us, this term simply means the period that begins with the collapse of a regime—a period whose outcome is fundamentally uncertain, far from any “democratic teleology.” In this sense, all the Arab countries that have witnessed the fall of their dictator, or those—like Syria—where whole parts of the country have escaped his authority, have been through something similar to transitions, independently of their immediate outcome.

Transitions represent moments of political fluidity during which, without completely eliminating the weight of structures, the perceptions and decisions of the actors assume considerable importance. These are moments when a whole universe of possibilities opens up, because nothing is really written. This is what makes transitions, “revolutionary moments.” At a time when many ex post explanations of what the Arab spring has become want to make us believe that the dice were cast, we feel it was important to come to this moment of “political invention”—a moment that, in certain countries and in spite of appearances, is probably still open.

You write, in the Introduction, that the study of transitions helps understanding the political equations that shape Arab countries politics, in the way that even when there has been a return to an authoritarian regime, transitions have remodeled the local political scene, resulting in a new form of authoritarianism. Would you mind giving us examples?

In addition to being moments of “political invention,” transitions have fundamentally redefined the power relations—and perceptions of them—within societies as well as regimes. This is true even when the outcome has not been, at least for the time being, the democracy people hoped for and when there is a return to authoritarianism.

Egypt may be the most striking case. Many would like to see in Marshal al-Sissi a sort of restoration of Mubarak’s regime. However, the 2011–2013 period has profoundly shacked the political balance in Egypt. Marginalized under Mubarak’s presidency—who had preferred to rely on his business networks and the police apparatus—the army took advantage of the period running from 2011 to 2013 to regain the political centrality it had lost. So even if most of the actors of Mubarak’s time are still present in the current Egyptian regime, they do not occupy the same positions within power hierarchy. And as to the Muslim brothers, even if they continue to represent the first opposition force in the country, despite the huge and unseen repression they suffer from, they have suffered a lot from their experience of power. Many Egyptians who had a favorable opinion on them consider them as incompetent and sectarian. As Marc Lynch—one of the contributors to this volume—shows, this perception was fueled by a whole part of the Egyptian media apparatus, echoing diverse interests, since 2011. Clearly, the new Egyptian authoritarianism relies on a new political equation that is radically different from the pre-2011 period.

In this book you are particularly interested in the few countries where transitions have actually taken place: Tunisia and Egypt, of course, but also Libya and Yemen. You have also chosen to take an interest in themes that have not yet been studied in a systematic or comparative way, yet which make it possible to understand the profound dynamics at work during the Arab transitions. Can you describe how the book is organized?

We wish to renew the way these revolutionary processes are studied, by developing the analysis through four sections: first, the question of the political and constitutional arrangements that have founded a genuine transition in Tunisia and condemned it in Egypt; Second, the size of military and security apparatuses, whose centrality is too often not sufficiently taken into account; Third the question of the very concept of “civil society,” linked to that of the “old” and “new” media, and to the intervention of external actors who are supposed to facilitate the institutional transition; Finally, the study of transitional justice is perhaps the most original theme of this work.

We have endeavored, both to give priority to a new angle of approach—for those themes already familiar in the specialized literature—and to open a new field—whether it be the aforementioned transitional justice or an approach of historical comparatism, with the category of “modern Mamluk”. Our ambition is to propose instruments and categories of understanding worthy of contributing to an already well-nourished academic debate. We hope that the reader, a specialist of these subjects or not, will be sensitive to our approach.

What has become of the “lifeblood” that took to the streets in 2011?

The popular protests that began in Tunisia in December 2010 and then spread to most Arab countries from the fall of dictator Ben Ali the following month have a deeply pacifist character that needs to be reminded. These demonstrations revived a tradition of non-violence rooted in the history of the Arab world, the most eloquent illustration of which was the thawra/revolution of 1919 in Egypt against British colonialism. The militarization of repression, and therefore resistance to this repression, was terribly negative for this nonviolent protest. The shift was particularly rapid in Libya, but Assad in Syria methodically fueled a logic of civil war to stifle the peaceful protests, soon followed in Yemen by Ali Abdallah Saleh, who was trying to recover power lost during the February 2012 transition. In Egypt, the bloodbath of August 2013, shortly after the overthrow of President-elect Morsi, plunged the country into an unprecedented cycle of violence. The despots, whose sole legitimacy is the supposed guarantee of security at the expense of collective and individual freedoms, have failed everywhere. The forces mobilized during winter 2010-11 are lastingly traumatized by counter-revolutionary violence but they have learned to make their emancipation project last a generation rather than a revolution. And it is this dialectic between the revolutionary moment and the transitional dynamics that this book endeavors to enlighten.