Political scientist Olivier Dabène is the author of Street Art and Democracy in Latin America, published by Palgrave Macmillan. The author presents the results of a several year long project in several cities of Latin America, during which he investigated and questioned the relation between street art and (local) democracy. Olivier Dabène has accepted to answer our questions and present his book.

What triggered your interest in street art?

My book finds its origin in a two-year stay in São Paulo, Brazil, in 2000-2002. My research interests back then focused on democracy operating at the local level under very adverse background conditions including very high levels of violence and abysmal inequalities. As I was exploring some of the most deprived areas of the city, I soon discovered they were home to amazing artistic creativity. I started to study the way disenfranchised groups used arts to voice their frustration and nurture public debates. Rap music and marginal literature turned out to be the subject of a book ( Exclusion et politique à São Paulo. Les outsiders de la démocratie au Brésil published with Karthala in 2006) while other fascinating politicized artistic expressions such as graffiti writing were temporarily put on the back burner. After a decade exploring other topics, I let my fascination for urban culture regain preeminence with a new comparative research project on street art and democracy.

What is or are the core argument(s) of this book?

The core argument of this book is twofold. First, when artists invade public space for the sake of voicing rage and disseminating claims or statements, they raise public awareness, nurture public debate, and hold authorities accountable. They can also interact with neighbours and thereby contribute to community building. Consequently, so goes my argument, they behave as urban citizens and foster street-level deliberative democracy even if they violate the law on a regular basis. Second, street art reveals how public space is governed. When local authorities try to contain, regulate, and monitor, or even repress, public space invasions, they can achieve their goals democratically if, instead of simply criminalizing the activity, they engage in dialogue with the artists and try to reach an understanding inspired by a conception of the city as a commons.

How did you work, what research methodology did you adopt/follow? How did you choose the sites you investigated and the artists you interviewed?

I conducted a total of 63 interviews in five Latin American cities, in order to collect empirical evidence and prepare to undertake in-depth city case studies.

The five cities examined in this book were selected because they were more or less distant from the democratic ideal-type that rests upon two overlapping and cross-fertilizing components: urban-citizen artists strengthening street-level democracy and authorities keen to deliberate over the use of public space and promote urban collaborative governance. My “anchor” case was Bogota (Colombia) and then came São Paulo (Brazil), Valparaíso (Chile), Oaxaca (México), and Havana (Cuba). 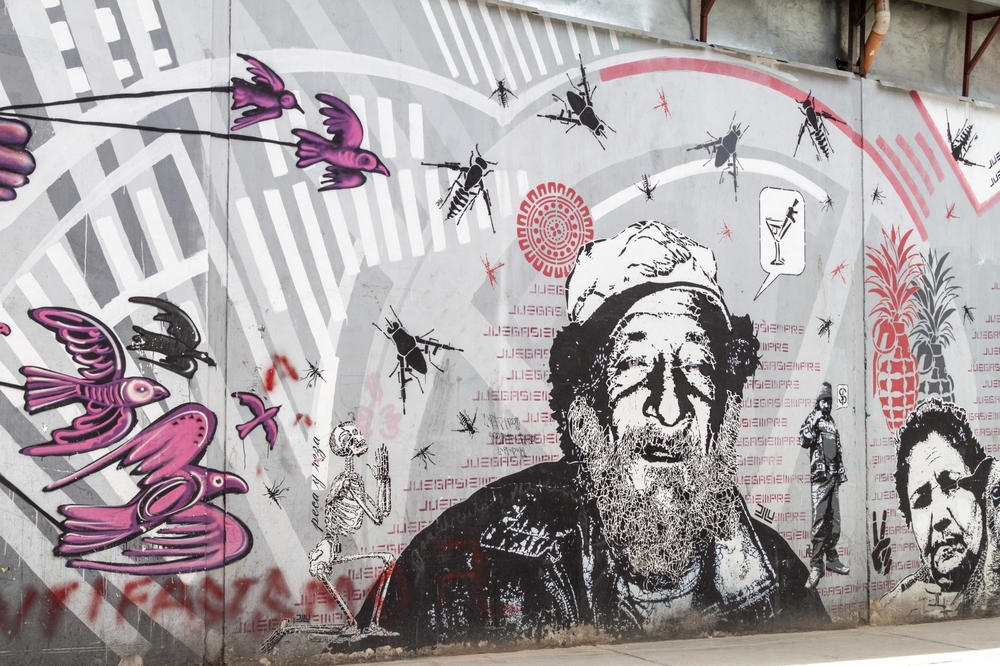 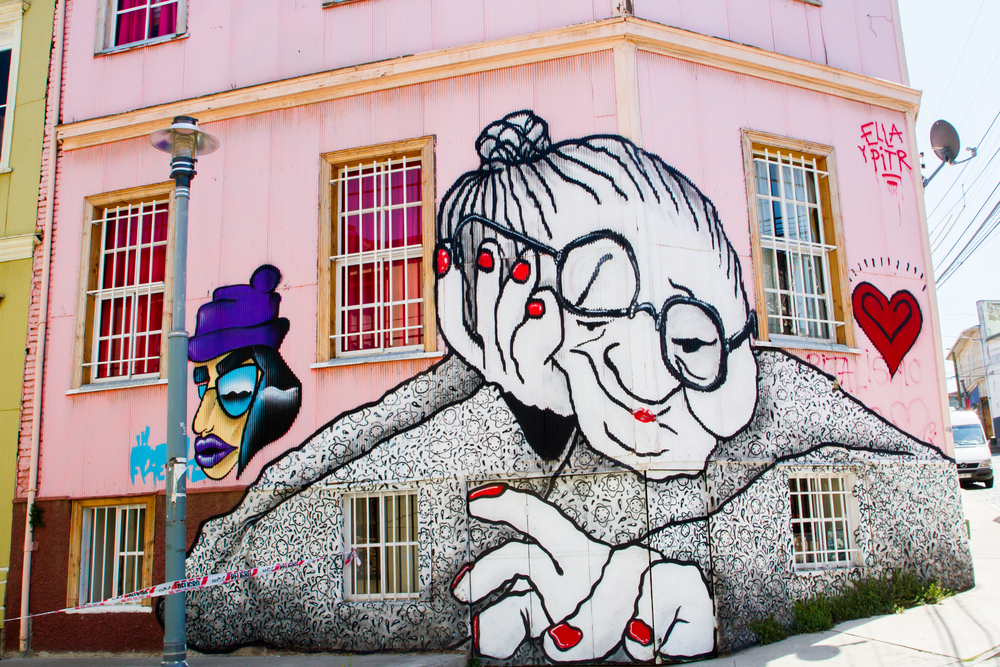 Is there a contradiction—for street artists, according to you—between the fact of acting as urban citizens and violating the law on a regular basis?

Violating the law is an act of defiance that entails a political meaning. Most of the artists I interviewed explained they had a message to convey and chose to do it by intervening on a wall, at the risk of being taken into custody!

To me, street artists qualify as urban citizens if/when they make public claims about issues of common concern. Legality is not a factor. I admit this is debatable, but I deliberately put the emphasis on empowerment, that is on disenfranchised categories forcing their way into the “demos”. In my view, deliberative democracy can accommodate some illegal expressions.

In what way does street art reveal how public space is governed? Why does it reveal the city as a commons?

You can tell by looking at city walls if municipal authorities are keen to tolerate or even incentivize some forms of street art or if they rush to refurbish the walls. Then, on further inquiry, you can unveil several types of interactions between artists and authorities. I was particularly interested in cooperative governance, when artists and authorities open a space of deliberation and try to find common ground and set some rules, inspired by a conception of the city as belonging to all (commons). 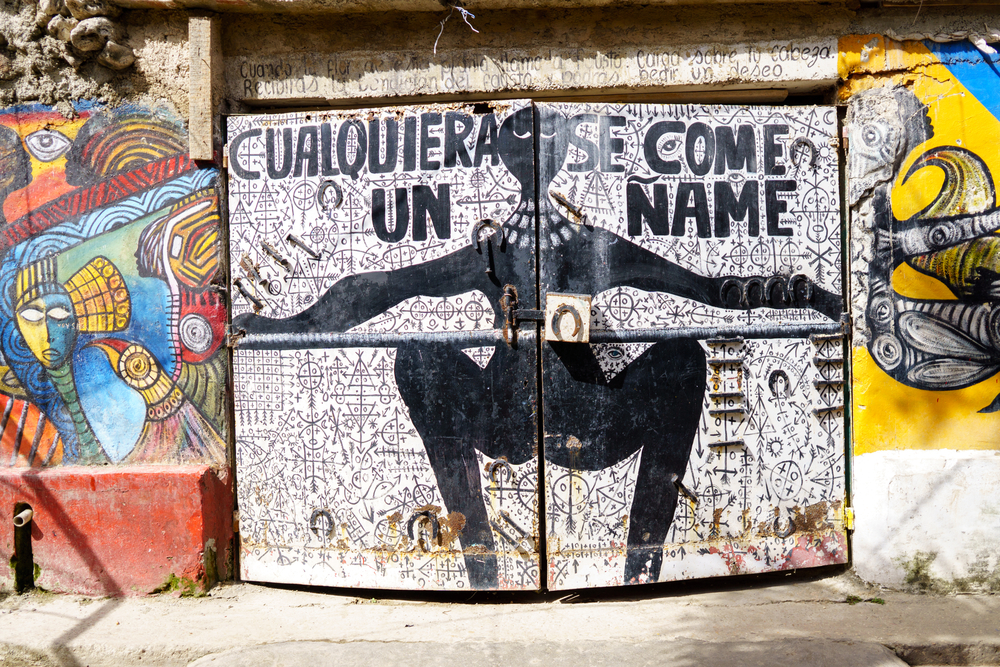 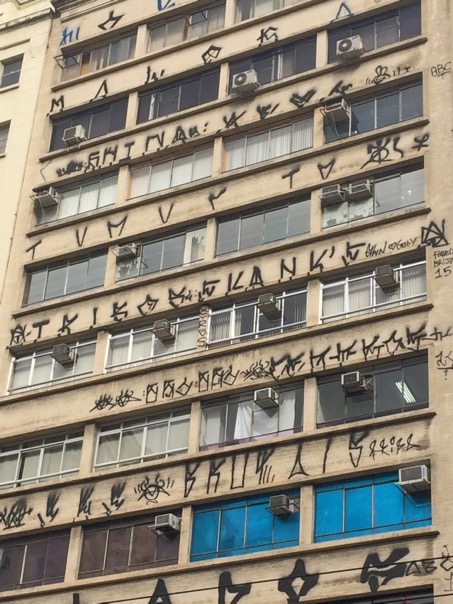 Did this project bring about surprises?

I knew beforehand that street artists had many stories to tell about politics. However, the field work delivered more than expected: daring artists intervening on walls downtown Havana, for instance. I did not expect to meet so many artists making public claims in Cuba.

Still, more than surprises, what this project brought about were fascinating encounters. I really enjoyed doing my field work. Our conversations were fluid and we were able to get to the bottom of their urge to share emotions.

Comments on some selected works

Street art can contribute to opinion formation and hence to deliberative democracy. Here are three examples. 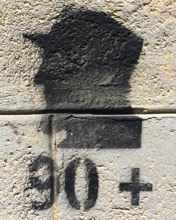 In Havana (Cuba), I found this stencil of Fidel Castro with a simple arithmetic below it: 90+. Some people probably interpreted the message as a reminder that their cherished líder máximo was getting very old, a worry converted into sadness and nostalgia after he died in 2017. Others probably silently lamented the fact that he led the destiny of their country for so long, even from the back seat in his last years. Be it a tribute or a critique, there is no way to know what the artist meant, but there is every reason to believe that everyone felt concerned and comforted in his opinion.

Yamil’s injunction to imagine a different city sounds like a challenge for the urban dwellers used to navigating in an environment perceived as hostile. Yet, significantly, Yamil is not trying to impose his personal opinion. And this is where he behaves as an urban citizen, inviting his fellow-citizens to reconsider their conceptions of the city, be part of public debates on insecurity, and make up their judgment and policy preferences. To some extent, his invitation to “imagine” is neutral. Some would interpret it as an evocation of a golden era when there was more sociability in the streets and neighbourhoods. By contrast, others would picture a nightmarish future during which the inhabitants are unable to protect themselves from petty crimes. 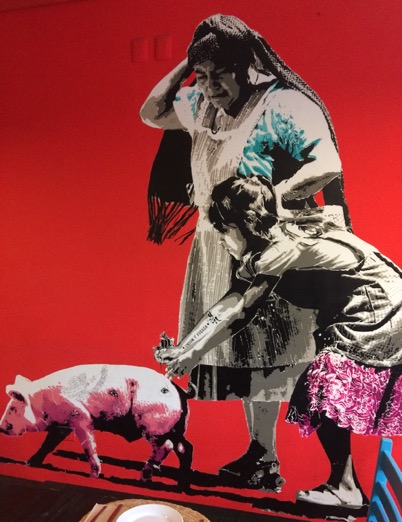 In Oaxaca (México), I am a great admirer of Lapiztola, a crew composed of two artists, Rosario and Roberto.

This piece is quite emblematic of their undertaking, with several layers of meaning using symbols and a particular attention paid to details.

An indigenous girl chasing a pig with her mother watching, out of necessity to find food? It is much more complex than the impression at first sight. The girl is actually trying to tattoo the pig, which could evoke a mark of private property, much like rich land-owners do with their cattle. Yet, it appears even richer, as the details reveal the girl herself has two tattoos on her right arm. One says “union and strength” and the other represents a bird with the word libre (free). And the pig actually has two tattoos as well, one that displays a wing and a flower with an ironic “viva la vida”, and another one representing the Eye of Providence. There are also several wounds on the pig’s skin, which can be interpreted as previous failed tattooing attempts.

In a conversation with Rosario, she proved to not have all the answers. Some meanings must remain unexplained, she said. They just let their imagination take control… and let the viewers react.