Home | News | Paris Expansion: An Update on Our Future Campus 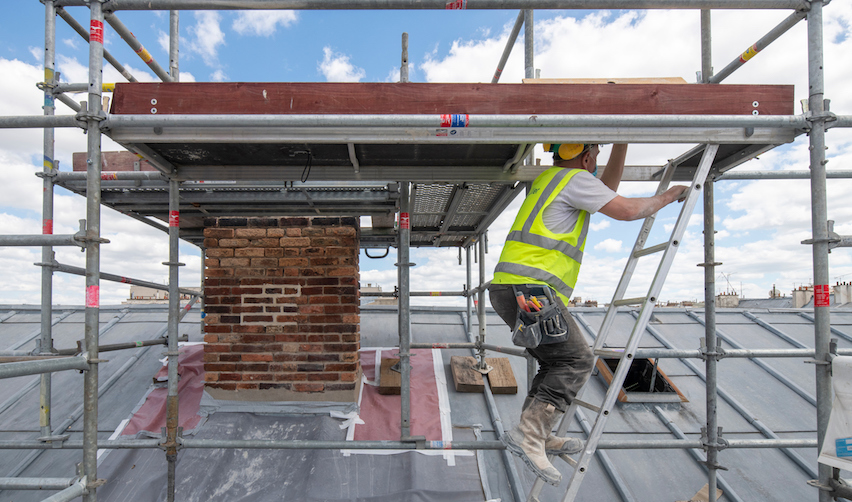 Honoring the past, welcoming new uses, and preserving the future: these are the values on which are based the renovations of 1, place Saint-Thomas, the expansion of Sciences Po’s Parisian campus, which have recently significantly advanced.

After the deployment of giant bulldozers and then of an impressive crane, come the “earthworks” on the terrain lying beneath. Under this somewhat prosaic term hides an almost magical reality, in which buildings appear to be levitating in thin air...

“The soil of the Cours Treuille de Beaulieu and Gribeauval was dug up in depth to install the foundations of future buildings, while reinforcing those of the neighbouring buildings. This allows us to create new surfaces in these courtyards: in infrastructure, with the creation of a garden level, and in superstructure, with the construction of the Pavilion of Innovation in the Gribeauval courtyard,” explains Emmanuelle Dubrana, Director of Real Estate at Sciences Po. “Earthworks have been carried out under part of the existing buildings, which are thus suspended in the air.”

The ground floors levels - both streetside and garden side - are now almost completed, and the courtyards are gradually returning to their original level.

Another breakthrough with strong symbolic significance has been reached: in January 2020, the wall that separated 1, place Saint-Thomas and 13, rue de l'Université was demolished.

The two sites are now linked. Sciences Po students, faculty, researchers, staff and other visitors will easily be able to come and go from one building to another. This is the case already today between 27, rue Saint-Guillaume and 56, rue des Saints-Pères, the other sites of our Paris campus, which are linked by a garden. This desire to simplify the flow of traffic is a high priority in the organization of the future Parisian campus. “There will be stairs and an elevator that will allow for smooth circulation between the two sites. This is one of the major aspects of the project."

The Sébastopol courtyard is currently covered in scaffoldings in order to restore its heritage. This work involves various sorts of specialized work.

Two of the galleries in the cloister have just been cleaned of the plasters and paints that were applied during the 20th century to transform these galleries into offices. Highly specialized workers, nicknamed "Pierreux," renovated the stones so that the cloister would return to its original appearance.

At the very top of the buildings, roofers and carpenters restore the dormers, working on oak, zinc and slate.

The interior of the buildings is also simultaneously undergoing renovations: the walls and floors have been stripped bare, revealing the great volumes and some traces of the past: remains of soot on the walls where there used to be fireplaces, or even wood panels dating from the building's origin, which have been put into preservation trunks to ensure their conservation.

A lime-hemp plaster, with its positive ecological and thermal properties, has been applied to the interior walls, with a technique allowing the preservation of the cut stone below. If necessary, future generations will thus be able to remove the plaster and find underneath the original stone in perfect condition.