Home | News | “Propaganda is the foundation of liberal democracy” 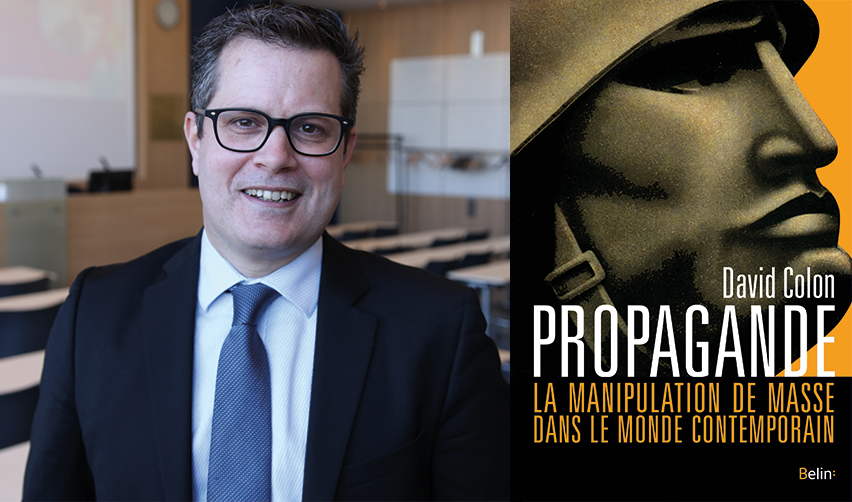 Persuasion of the masses wasn’t born with the Internet, but digital content and social media mark a revolution in the history of propaganda. Far from having disappeared with the totalitarian regimes of the 20th century, today it is more present, more efficient, and more of a danger than ever before for democracy. We interviewed David Colon, historian and instructor at Sciences Po, about his book, Propaganda. The Manipulation of the Masses in the Contemporary World (Propagande. La manipulation de masse dans le monde contemporain. Available in French only.)

In this book you write a history of “propaganda,” using quite a general definition in which you do not, in theory, attach any moral judgment: it’s more about techniques and motivations for persuading the masses. What made you decide to write this history?

When my oldest daughter was born, in January 2016, I made the most of my sleepless nights and followed the American primaries live. I was astounded by the new and radical propaganda which Donald Trump deployed in his campaign and on social media. I wanted to write a book from a very Sciences Po perspective, that’s to say analysing this reality from a multidisciplinary approach, in the light of social and cognitive sciences. This work is essentially the product of the courses that I have taught at Sciences Po since 2013. What interests me is the “engineering of opinion” and the behaviour change policies: how do we affect the attitudes and behaviours of individuals?

In this book, you study an entire century of the evolution of propaganda in all its forms. How is propaganda from the start of the 20th century different from today?

The advent of the internet marks a true break with the propaganda model which had until then dominated democratic regimes. Twentieth century propaganda held liberal democracy together. It allowed for the reconciliation of the democratic principle of respect of the liberty of individuals alongside the roles of the elite. It also essentially consisted in “manufactured consent”, thanks to mass media and a larger and more inclusive public sphere. We are witness to propaganda’s mutations, which are a symptom of democratic crisis. The internet has “disrupted” liberal democracy, proposing a model which, from a historian’s perspective, has set us back by a century.

How has this set us back?

We have regressed to the situation which prevailed in France before the Dreyfus affair, when each person consolidated his own opinions by reading a partisan press. After the Dreyfus affair, a popular press emerged, according to Gabriel Tarde, for the “fusion of personal opinions with national opinion”. This press gave rise to a broader public sphere making way for commonly accepted facts. It is this glue which today has come unstuck, under the corrosive effect of digital propaganda; the free public space is shrinking as the traditional media no longer plays its role of integration, and pacification of social and political life. Relativism and extreme polarisation dominate, as debate is brutalised. The truth regime founded on shared facts is replaced by a new form of truth regime which relies upon an absolute relativism and ideological inwardness: post-truth.

Your book owes a lot to the works of Edouard Bernays, Jacques Ellul and Marshall McLuhan, for their understanding that propaganda requires a consideration of the technology behind it. What role does the internet play in this evolution?

The internet changes everything. Access to a large number and variety of sources of information heightens “confirmation bias”; information is immediately accessible and in many cases it reinforces points of view, even when they are absurd. Social media has accelerated the impact of the “selective exposure” phenomenon. Our natural reaction is to favour information supporting our own stance and to rebuke that which contradicts it. This promotes a “primalism” on the internet; it has been proven that content which goes viral is often that which causes an emotional reaction, be it a joyful or angry one. The “filter bubble”, created by personalised algorithms, presides over access to information as well as online recreation, and tends to build, without us realising it, an ideological garden fence or community. In turn this gives birth to “influential opinion leaders” who are able to multiply their influence. Jacques Ellul was right to state, in 1962, that “the more propaganda there is, the more closed off things become”. The digital ecosystem thus works in fake news’ favour, by spreading it quickly and orchestrating human reactions for manipulative purposes.

But how can we fight the toxic impact of this new type of propaganda? Must we deploy a ‘white propaganda’ using the same techniques?

Propaganda was invented by democracies who considered its use legitimate, even necessary in times of war, but took their time when using it in times of peace. The Cold War opened the floodgates for white propaganda, or unmasked propaganda, in ordinary actions of the government. Thereafter, this usage became more difficult to control; the word “propaganda” disappeared in exchange for the word “communication”. However, the dangerous effects of digital propaganda, black or white, employed by certain states to destabilise democracies, led to a heightened awareness about the challenge posed by propaganda in political and military milieux. It became as much about self-protection in an attempt, for example, to fight fake news, as it was about re-thinking “counter-propaganda”. That said, there is no miracle solution, and “fact-checking” techniques are often limited as they create a “boomerang effect”, reinforcing pre-established convictions of individuals who spread fake news.

How then can we reunite what is a very divided public space?

To reunite the public space, first of all we must “save the media”, according to Julia Cagé, whose works are particularly enlightening. In the context of extremely concentrated media in a liberal democracy, it is necessary to favour the creation of independent media with regards as much to political and economic powers. We must also “save journalists”, who are fleeing the profession at an alarming speed in the United States and whose numbers have decreased over the past two years in France.

We must also change the rules governing the funding of political campaigns. It is in fact in many industries and lobbies’ interest that we disagree and that science itself is challenged or weakened as a result. It is thus imperative that we recreate the conditions required for a settled public space, and an information sphere where journalists once again assume their role as “gatekeepers” and “messengers delivering information” that the public can trust.

Can social platforms play a role? What about their users?

I don’t really think that platforms like Facebook or Twitter can efficiently fight against techniques to manipulate information, as their economic model is founded on targeted ad placement and the commercialisation of the “available brain time” of their users… I find it dangerous that governments or states rely on private actors to manage what should be considered as common goods, that is to say, information. What is even more worrisome is that we are part of the rise of algorithmic, automated, and very personalised propaganda… As a last resort, I think that in the age of cyber propaganda, we need to rehabilitate humans. Education institutions have a responsibility to teach critical thinking. We must train our students to practice intellectual self-defence, to teach them how to find and cross-check information, and the art of source evaluation. Now more than ever, we must warn them of our own innate cognitive biases, because the dream of 20th century propagandists (to understand thoughts behind every action) is about to become a reality simultaneous to the nightmares of democracy. The frightening efficiency of propaganda is staring us in the face; we must understand its mechanisms, and develop the ethics behind its use. All methods of mass communication are in essence manipulatory. in consequence, the question to pose is, what are the motivations behind them? Do we wish to use these techniques for private interests or for the good of the general public?