Home | The Facts About Fariba Adelkhah and Roland Marchal

Fariba Adelkhah has been deprived of freedom for 1,000 days

For 1,000 days, faced with arbitrary imprisonment, with injustice, and with health-threatening living conditions, she has stood her ground with admirable moral strength and dignity. For 1,000 days, her family, friends, and support committee, as well as Sciences Po and the French authorities, have done everything in their power to obtain her release.

What has happened since Fariba Adelkhah and Roland Marchal's arrest on 5 June 2019?

Fariba Adelkhah and Roland Marchal, both researchers at Sciences Po, were arrested in Iran on 5 June 2019.

From December 2019 to February 2020, Fariba Adelkhah, along with Kylie Moor-Gilbert, an Australian researcher was also incarcerated in Iran, led a hunger strike that lasted 49 days. She still suffers from side effects of this hunger strike.

The leaders’ accusation against Fariba Adelkhah was “propaganda against the Islamic Republic’s political system” and “collusion to undermine national security.” Only the latter charge was applied to Roland Marchal. The charge of espionage against Fariba Adelkhah, punishable by the death sentence, was dropped on the 6 January 2020.

Yet on the 16 May 2020, the researcher was condemned to five years in prison for “collusion to undermine national security” and “propaganda against the Islamic Republic’s political system”. After nearly a year of emprisonment, Fariba Adelkhah had refused a conditional release that stipulated that she stop her research endeavors.

On 15 December 2020,  Fariba Adelkhah was awarded the 2020 Irène Joliot-Curie Prize (FR) for Woman Scientist of the Year, awarded by the Ministry of Higher Education, Research and Innovation for her research in anthropology and political science.

On 12 January 2022, Sciences Po learned of Fariba Adelkhah’s reincarceration in the Evin prison.

What steps have been taken by Sciences Po and the French authorities since their incarceration?

Upon receiving news of the arrests of Fariba Adelkhah and Roland Marchal, our institution immediately implemented a series of actions in close collaboration with the Crisis and Support Centre of the French Ministry of Europe and Foreign Affairs (MEAE) and the CNRS. With the help of the MEAE, we have ensured that both Fariba Adelkhah and Roland Marchal receive the assistance of a highly experienced Iranian lawyer.

Sciences Po and the French authorities continue to do their utmost to ensure that Fariba Adelkhah is definitively released, in an Iranian political context which, as is common knowledge, is particularly complex.

A demonstration in support of Fariba Adelkhah and Roland Marchal was organized in Paris on 11 February 2020.

A support rally was held on 3 March 2020, in front of Sciences Po in Paris:

A portrait of Fariba Adelkhah was also enveiled on the side of the Mairie de Paris.

On 25 April 2021, for Fariba Adelkhah's birthday, the support committee created a book-exhibition of her wood and leather collages made during her imprisonment. The collages are accompanied by a text written by the researcher, opening a window on daily life in Evin prison.

On 5 June 2021, Sciences Po showed its unfailing support to Fariba Adelkhah on the occasion of the two-year anniversary of her imprisonment. Many French and international colleagues, friends, acquaintances and personalities joined the call for her release, including the president of the Ligue des Droits de l'Homme Malik Salemkour, the CEO of the National Centre for Scientific Research (CNRS) Antoine Petit, the Anglo-Australian academic and former detainee in Iran Kylie Moore-Gilbert and Roland Marchal, CNRS researcher at the CERI, former detainee in Iran arrested alongside Fariba Adelkhah.

The Paris City Hall also unveiled a banner in support of the researcher.

On the 13 January 2022, Sciences Po, having learned of her reincarceration the night before, organised a gathering in solidarity with Fariba in front of Sciences Po. 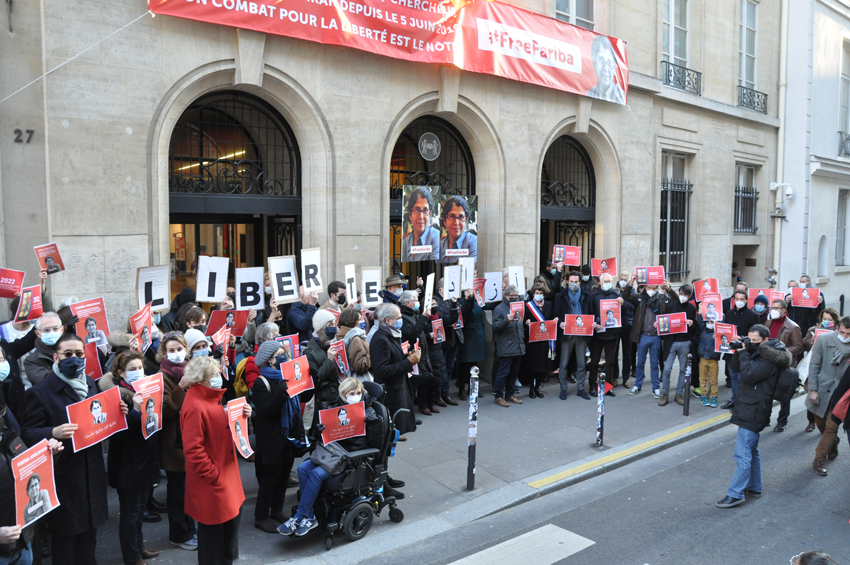 1 March 2022: A gathering was organised in front of the Paris City Hall in support of Fariba Adelkhah, to mark the thousandth day of her imprisonment. 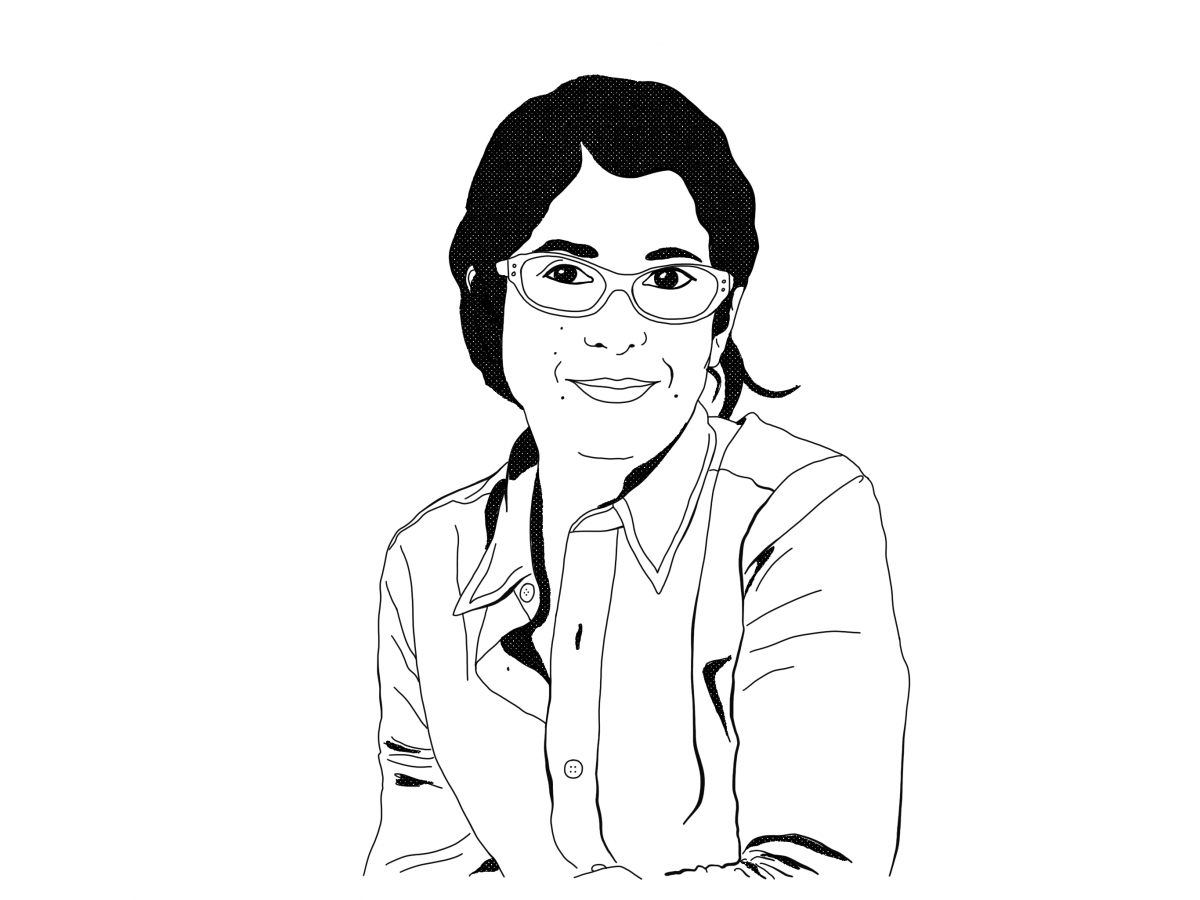 Fariba Adelkhah was born in 1959 in the Iranian province of Khorassan (a region that fronts the border with Afghanistan). She came to France in 1977 to pursue her university education, first at the University of Strasbourg and then at the School of Advanced Studies in the Social Sciences (EHESS). A specialist in social anthropology and the political anthropology of post-revolutionary Iran, Adelkhah has been a researcher at the Centre for International Research since 1993. Her early work considered the position of women in the Islamic Revolution, culminating in her first publication, Revolution under the Veil: Islamic Women of Iran (Karthala, 1991). Her current research examines the movement of Shia clerics between Afghanistan, Iran, and Iraq. A researcher of the field, renowned and respected among peers internationally, Fariba Adelkhah is a member of various academic committees and of the journals, Iranian Studies and Revue des mondes musulmans de la Méditerranée.

Who is Roland Marchal?

Roland Marchal is a sociologist with the French Centre National de la Recherche Scientifique (CNRS) and he has worked as a researcher at the Centre for International Studies of Sciences Po (CERI) since 1997. Roland is one of the most internationally renowned specialists on Somalia, but also on the Horn of Africa, Chad, Central African Republic and Mali. Roland also addressed theories of the “failed state”, especially drawing on his research in Somalia.

He was, with the late Christine Messiant, among the first few to criticize the reductionism of economic theories about civil wars in two groundbreaking papers published in the journal Critique internationale. Their common research, published as Les Chemins de la guerre et de la paix. Fins de conflit en Afrique orientale et australe (Karthala, 1997), demonstrated how civil wars in Sub-saharan Africa and beyond are intimately interrelated to the fabric of the state. This thinking was also the central thesis of the seminal book he co-edited with Pierre Hassner: Guerres et sociétés. Etats et violence après la Guerre froide (Karthala, 2003).

After spending over nine months as an academic prisoner in Iran, Roland Marchal was released from Evin prison and returned to France on March 21, 2020.