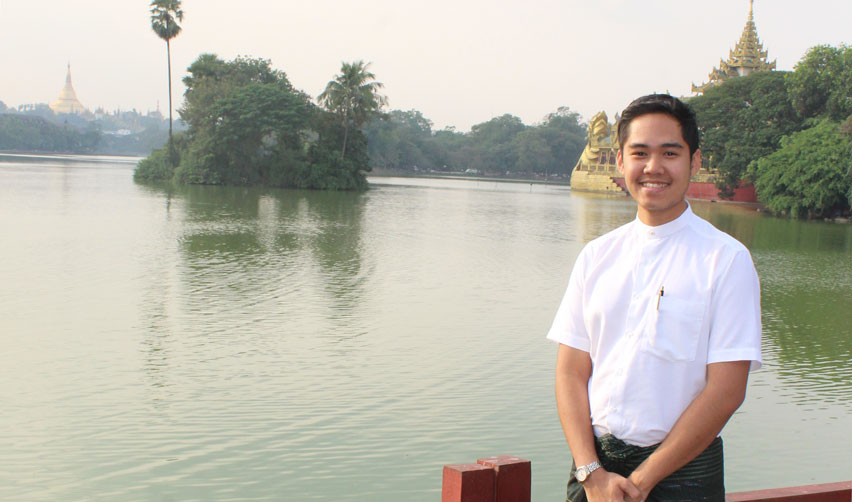 Alex Aung Khant is one of the few Burmese nationals to have graduated from Sciences Po. Now back home in Myanmar, he works as a project manager at Flyover Art Project, an organisation which aims to bring pedestrians back onto the streets of Yangon. Alex tells us about his wish to make his home city liveable in once again.

For your undergraduate studies, you spent two years on the very multicultural Sciences Po campus in Le Havre. How much did your classmates know about Myanmar in 2011?

The year before I began my undergraduate studies in Le Havre, Aung San Suu Kyi was released from house-arrest and the unprecedented shift taking place in Myanmar's politics was stirring up interest around the world. When I began my undergraduate studies in 2011, my classmates already had a fair amount of knowledge about the political changes taking place. They had more questions about the social aspects of those changes, and the cultural differences between Myanmar and the rest of South-East Asia. As the Le Havre campus focuses on Asia, it offered courses on Asian politics and history, and Burma was addressed in classes.

After your undergraduate education, you completed the Master‘s programme in Governing the Large Metropolis at the Sciences Po Urban School in Paris. What were your reasons for choosing to do your Master’s in Urbanism?

My hometown of Yangon was my case-study as I was growing up. Years of neglect and a lack of proper maintenance and planning under the previous military government, combined with the recent urban sprawl and the wave of rural-urban migrants and foreign immigrants, have turned this former gem of a city into a congested, polluted, and dysfunctional mess. Choosing to complete the Master's programme in Governing the Large Metropolis was with the full intention of coming back home and making my small contribution to alleviating the problems, and hopefully turning Yangon back into a liveable city that we can all be proud of again.

You are back in Myanmar now, and you work in Yangon. What is your job exactly?

In the last five years since the country has opened up, Yangon has seen an exponential increase in cars and consequently in traffic problems. Lacking a proper mass transportation network, the city has been brought to a standstill. The government has tried to alleviate the traffic problem by building flyovers, but we all know from other cities that prioritising cars is a mistake that has been proven over and again. The Flyover Project aims to bring pedestrians back onto the streets, very clearly prioritising foot-traffic, public spaces and street activity. As Project Manager, I also hope this initiative will be able to convince lawmakers and the city authorities to readjust their priorities for the road ahead.

What are your plans for the future?

I hope to continue working for my country and my city in any way possible.

The Dean of the School of Public Affairs and Professor of Economics Yann Algan has accepted a position at HEC Paris, where he will work as Associate Dean for the Pre-Experience Programme and continue his research into trust and cooperation in organisations. He will thus leave his position as Dean of the School of Public Affairs from the start of the 2021-2022 academic year. In February, he answered our questions about the School, taking us on a tour of the newest elements of a historic curriculum.