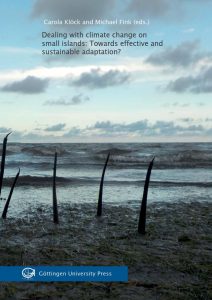 Because of climate change, the inhabitants of some small islands may see their lives change radically Why are small islands more vulnerable to the global and major ordeal of climate change? How do these small states deal with this huge challenge? There is no doubt that we can learn from their experience. These are among the crucial questions Carola Klöck and Michael Fink answer in this interview and have examined in their recently coedited volume entitled Dealing with Climate Change on Small Islands: Toward Effective and Sustainable Adaptation (1) Download the book in Open access, Pdf (Universitätsverlag Göttingen).

You mention small islands are “hotspots” of climate change. Could you define “small island” and what you mean with “hotspot”?

Small is obviously a relative concept, and hence we cannot clearly say which islands are “small islands.” The book focuses on so-called Small island developing states (SIDS), which is a category used by the United Nations. There are about 50 SIDS across the oceans, including Papua New Guinea (rather large) and Nauru in the Pacific, La Réunion and Maldives in the Indian Ocean, the British and American Virgin Islands, and Trinidad and Tobago in the Caribbean.

Mostly, people tend to think about disappearing islands, but the reality is more complex. Some islands, atolls like Maldives and Kiribati, are just a few meters above sea level. Even if sea level rise is problematic, atolls do not necessarily disappear. 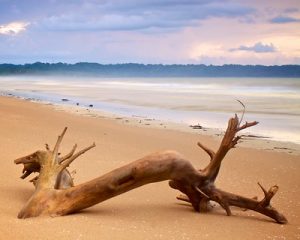 Beyond atolls, there are many more islands, including high-rising mountainous islands, that also struggle with climate change impacts like erosion, drought, or more intense storms. Even the more ambitious target of keeping global temperature rise to 1.5°C can be devastating for islanders—hence the focus on these “hotspots.”

What types of measures are taken to fight against the consequences of climate change, by whom, and why? Are there opposing stakeholders?

Island societies have long histories of surviving in often very adverse conditions. They have constantly adapted to changing environments and high climate variability. They have developed a variety of strategies to cope with these challenges over centuries. Their adaptability and local knowledge contribute to their resilience.
Islanders have also started to respond to climate change, for example by building seawalls, or even by relocating entire villages, for example in Fiji. Additionally, most SIDS have national climate change policies and plans, and have started to mainstream climate change into their development. 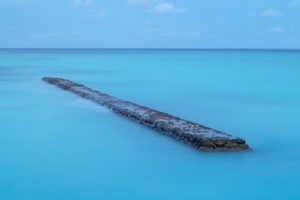 As the book also shows however, not all measures are necessarily effective and sustainable in the long term. Seawalls can collapse, relocation poses many cultural and identity problems— particularly when the original place of residence is permanently flooded—and policies and plans are not always implemented or monitored and evaluated. Often, adaptation only occurs when financial assistance is available, but such external funding also comes with problems. This issue which is not new relates to the more general question of development aid, and is well documented in development research. Such research shows for example that donors like to finance short-term “pilot projects” but these are then discontinued before any long-term effects are obtained, in addition to what local authorities are rarely in a position to take over.

On the other hand, we also demonstrate that islanders are creative, that they experiment various measures, and that they have a repertoire of coping strategies. The volume includes case studies of local adaptation in Samoa, Solomon Islands and Fiji, among others, that demonstrate islanders’ resilience and adaptability. How successful the various strategies are in the long term remains to be seen.

What can we learn from small islands in terms of climate change adaptation? 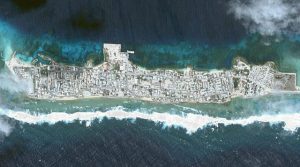 Small islands have very rich histories of resilience, incredible local knowledge and long-term experience with adapting to change of all sorts. Small islands may be among the first affected by climate change, but in the end, the entire world needs to adapt. It thus makes sense to look at the experiences, best practices but also mistakes of climate change adaptation in small islands, to examine more closely which measures were taken, what has worked, what hasn’t, and why.

Small islands can also learn from each other, even if every island is different and there are simply no one-size-fits-all solution to climate change. It therefore does make sense to share learning. This can be done for coastal erosion, for example. SIDS have only very limited resources, which is unsurprising given their small size. Tuvalu for example has a population of only around 12,000! It does make sense to share experience and this can allow for a reduction of costs, provided the specificities of each environment is taken into account. 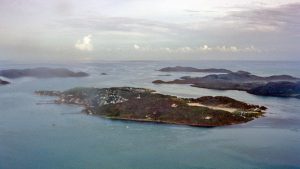 Surprisingly, there is fairly little comparative work and exchange across islands, and even less across island regions, both in research and in practice. Experts on the Caribbean thus may know little about the Pacific, and vice-versa. Our book seeks to address this gap, by combining work from different island regions, and by including work from different disciplines, from anthropology to geography and philosophy.

Would you say, to conclude, that small Islands are ready for climate change?

We don’t think anyone is ready for climate change. Much more needs to be done to prepare ourselves for the impacts of climate change. This holds true for small islands that also struggle with many other challenges beyond climate change, such as pollution, urbanisation, or unequal global trade.

At the same time, we think that the burden of action should not be on small islands. SIDS have contributed almost nothing to global greenhouse gas emissions –just around 1% of global emissions between 1960 and 2014, but now suffer disproportionately from the effects. The most important response to climate change is mitigation, that is, reducing greenhouse gas emissions. It is the largest emitters—the United States, oil-producing countries, Europe—that need to act most urgently!

Further reading on the subject