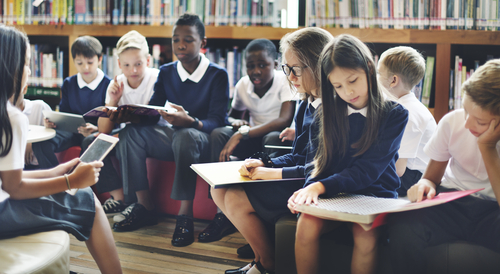 The relationship between the concentration of foreign pupils and middle school results: the contribution of panel data

Reflection on ethnic and social diversity in the French school system concerns public authorities, institutions, and parents. A very concrete issue is the possible correlation between educational attainment and the number of foreign children in a middle school class. Denis Fougère offers an answer by using the panel technique. 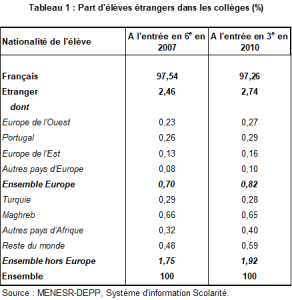 The probable effects of the presence of foreign pupils

The presence of foreign pupils in a class could have negative effects on the academic results of their peers for several reasons: teachers might provide them with additional support and adapt the teaching to respond to their specific needs. There might be concerns about a slower pace of teaching or lower expectations. Class cohesion might be affected. Conversely, the presence of foreign pupils might be beneficial to the whole class, given the cultural enrichment it provides.
The balance between these effects notably depends on these pupils integration, which is in turn linked to different factors, including the migratory context and families’ attention to their children’s schooling.
It is also important to note that the general effect of the share of foreign pupils is difficult to identify, since the distribution of foreign pupils in classes is not random. Institutions with high shares of foreign pupils are often in areas where social difficulties are concentrated: poverty, unemployment and lowly skilled adults. Thus the average level of pupils at these schools might be lower than the national average.

A new approach through the measurement of “peer effects”

The deployed methods allow for an assessment of both the effects of pupils’ family and school environment, and a component specific to each student that represents their aptitude throughout their education. 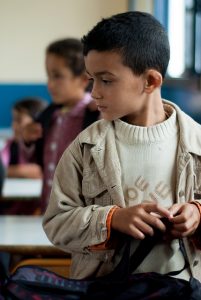 This type of research is similar to a new approach in the economics of education. It is not just based on the individual paths of pupils, such as their social origin, but also seeks to measure the effects of class composition on academic results. This research identifies what are known as “peer effects”: classes can differ depending on the proportion of pupils of each gender, their different social and ethnic origins and the average academic level of their classmates. Are these differences, which generate more or less diversity within the classes, likely to affect pupils’ results?

The panel: a representative sample of pupils whose education is tracked

The research draws on a panel of secondary school pupils that was developed by the Ministry of Education’s department of evaluation, potential and performance (DEPP). It includes several educational performance measures and information on the national origin and socioeconomic characteristics of pupils and on the number of foreign pupils in middle school classes. It is a particularly rich source of information that allows for a specific answer to the question asked.
The panel was formed on the basis of a national representative sample of pupils who entered sixth grade for the first time in 2007 and were educated at a public or certified private middle school. The pupils in this panel passed standardized tests at the end of sixth grade and of ninth grade. Those who repeated a grade were evaluated again the following year by passing similar tests. It is therefore possible to evaluate their educational progress from sixth grade through ninth grade in both French and mathematics. 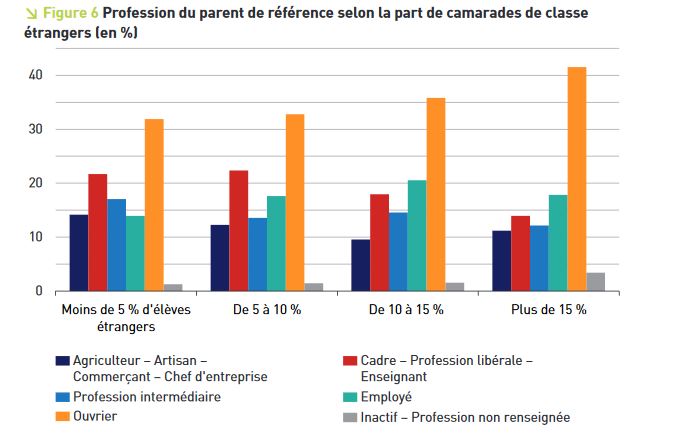 In sixth grade, a limited impact

Middle school pupils with a high share of foreign pupils in their class therefore generally come from underprivileged environments and have a lower level of educational attainment upon entering sixth grade. They also score below the national average on exams in mathematics and French held at the end of sixth grade. More specifically, a 10-percentage-point increase in the share of a student’s classmates – that is, two to three extra foreign pupils in a class – is associated with a 3% decrease in average results obtained in mathematics, and a 3.3% decrease in French. 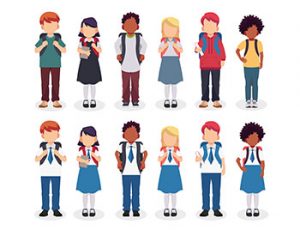 However, this apparent effect rapidly dissolves when explanatory variables are considered. After taking into account variables in the academic level upon entry in the sixth grade and repetitions in primary school, the parents’ social status, their income level and the class’s social composition, it appears that a 10-point increase in the share of foreign classmates only leads to an average score decrease of 0.5% in mathematics and 0.8% in French at the end of sixth grade. Most of the correlation between the share of foreign pupils in the class and academic performance at the end of sixth grade must therefore be interpreted through the characteristics of the attending pupils, rather than through an effect attributable to the nationality of classmates.

An effect that lessens over time

By the end of ninth grade the share of foreign pupils no longer has a significant effect if one takes into account the student’s level upon entering sixth grade and his/her academic and family environmental, unless one distinguishes between foreign pupils of European and non-European origin. Indeed, a high share of non-European foreign middle school pupils seems to have a slightly negative effect on mathematical scores; a 10-point increase in the share of non-European foreigners is associated with a 0.5% decrease in average results.
Overall, the effect of a higher share of foreign classmates appears to be very modest, and only noticeable at the beginning of middle school.

While the deployed method helped answer the question asked and distinguish between a “gross” effect and an adjusted effect by considering complementary explanatory variables, the obtained results confirm the difficulty of establishing causal relationships between two phenomena. This observation points to new research areas.