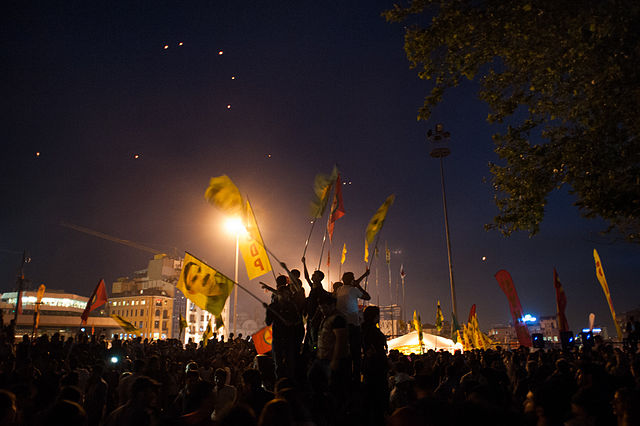 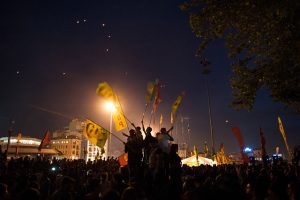 In recent years, Turkish democracy appears to have experienced a step-by-step descent into hell, with a succession of events such as the repression of the Gezi protests in 2013, the attempted coup d’état of July 2016 and the ferocious repression that followed, and finally, the constitutional reform of 2017 that resulted in a substantial increase in presidential powers. Yet even as restrictions of freedoms become increasingly common, observers of contemporary Turkey are struck by the frequency of the governing elite’s strong references to democracy and the people. How can a party, which initially came to power and has remained there for almost 20 years through elections, which overcame the military supervision that limited civilian politics for decades, and which managed to open negotiations to join the European Union, pose such a threat to democracy? Can the notion of populism help us to understand the dynamics of the democracy in this country?

To understand why the Turkish context is prone to populism, it is important to consider the history of its democracy. In the 1920s, the Republic of Turkey was created by circles close to Mustafa Kemal: educated, westernised military and bureaucratic elites that founded and ‘maintained’ a regime that claimed radical top-down reformism. Kemal’s elites had little in common with the rest of society and gave themselves the job of educating and guiding the masses. This ‘regime elitism’ has made Turkey prone to populism, which is based on opposition between the elites and the ‘people’. 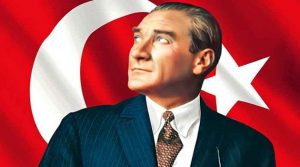 Although popular representation through election has always formed the basis of political legitimation, the move to a multi-party system at the beginning of the 1950s changed its implications: lawmakers were now freely elected. Since the first competitive elections in 1950, the main opposition party, the conservative and liberal Democratic Party, was highly critical of the domination of the bureaucratic elites, accusing them of being out of touch with the people. The Democrats won by a large majority on the promise of giving the people their voice back, with the famous slogan ‘Yeter! Söz milletindir’ (Enough! It is the Nation’s turn to speak). The Kemalist elites moved aside – but not without anxiety, and kept certain bastions, notably bureaucracy and justice, out of the hands of the election winners.
The military coups that have peppered Turkey’s contemporary history – notably those of 1960, 1971 and 1980 – reveal the ‘supervised’ nature of the regime: unelected authorities – military as well as judiciary – guard the regime against threats that could actually emanate from the elected authorities, such as political instability or the tendency of the elected powers to move away from certain supposedly inalienable constitutional principles, notably secularism. Thus, the first coup d’état in 1960 brought an end to the reign of the Democratic Party, which was turning away from secularism and exercising power by bridling the opposition and limiting public freedoms. However, these coups d’état have all been justified by the need to rescue democracy, requiring an interruption of its processes and a modification of its rules to ultimately achieve smoother operation.
The political history of Turkey can be seen as a confrontation between the supporters of the people’s will who believe that the people should not be restricted in any way on one side and, on the other side, those concerned by possible abuse of this indomitable popular will, who consider that counter-powers, notably judiciary and bureaucratic, are essential to channel it(1)Insel, Ahmet. “’Cet État n’est pas sans propriétaires !’  Forces prétoriennes et autoritarisme en Turquie” (“’This Nation is not without owners!’ Praetorian forces and authoritarianism in Turkey), Autoritarismes démocratiques. Démocraties autoritaires au XXIe siècle (Democratic authoritarianism. Authoritarian democracies in the 21st century). La Découverte, 2008, pp. 133-153.. Historically, the latter stance is that of Kemalists, while the first camp is represented by liberal and conservative parties, for example the Democratic Party. These two sides give more or less value to the two components of liberal democracy: the ‘demotic’ dimension, which emanates from the people’s voice and results in the elected authority, and the liberal dimension, i.e. the counter-powers that emerge to set boundaries for – and restrict – the actions of the elected authority. Unless, of course, they become safeguards or even supervisors?

Behind the Success of the AKP

The AKP, the Justice and Development Party, is undoubtedly on the demotic side. It originates from the Islamist movement, the long-standing pet hate of the Kemalists and military powers, and has long been ostracised from the legitimate political field. It has always had a clearly stated populist dimension. Having gained power in 2002 in the wake of the severe economic crisis of 2001, the AKP benefited from the widespread rejection of the established political classes and the establishment by large segments of society. It targeted the republican, secular elite, accusing it of failing to represent the people and holding democracy hostage. It promised to bring to power modest and conservative groups, which had long been prevented from accessing positions of power, and proclaimed itself a defender of the masses and of popular will, and therefore of democracy. It built its mobilisation discourse against westernised ‘elites’, along with their military and bureaucratic ‘bastions’, criticising them as limits to the popular opinions expressed in the ballot box. 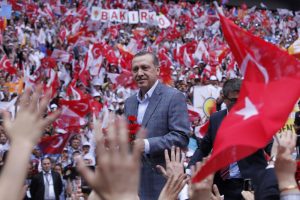 Recep Tayyip Erdoğan, originally from the Islamist movement and one of the founders of the AKP, embodies this populism in several ways. He appears to be the first truly popular political leader, in touch with the values and hopes of his people. He promotes his modest social origins, even in his manner of speaking and body language. During his political ascension, and even upon gaining power, he accused the establishment of being authoritarian and oppressive. Condemned and imprisoned for a poem with Islamist intonations that he recited in 1998 as Mayor of Istanbul, Erdoğan acted on this martyr status, oppressed by the military, bureaucrats and Kemalists … in fact all that is ‘anti-democratic’.
With a solid electoral base since 2002, representing between 40 and 50% of votes expressed, Erdoğan has succeeded in incarnating the popular will with remarkable longevity. This massive support, resulting in repeated large parliamentary majorities, has enabled his party to make substantial modifications to the institutional balance. In particular, it has drastically reduced the army’s institutional power over political matters, all in the name of democracy,

In 2013, two million Turkish citizens took to the streets, protesting in favour of preserving Gezi Park and inclusive, participative urban planning, and against a government they deemed intrusive and business-oriented. Thanks to his undeniable electoral popularity, Erdoğan, who was then Prime Minister, was able to reject the demonstrators’ claims, reasoning that in a representative democracy, the elected power cannot be called into question by demands from people in the streets, however many they might be. The head of the Turkish government thus opposed the authentic ‘people’, i.e. those who expressed themselves via the ballot box, and the hordes of çapulcu, i.e. looters who could make no claims of a representative or democratic nature. However, this ‘absolutism of national will’, to use the well-coined expression of political scientist and editorial writer Ahmet Insel, is also what has enabled and even justified the restrictions on pluralism, i.e. the regression of public liberties, notably with regards to opinion and expression. 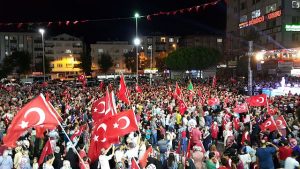 After the failed coup d’état of July 2016, the bringing to heel of the civil service through massive purges is a clear indication of the regression of the autonomy of the counter-powers. The constitutional reform, adopted by referendum in April 2017 by a narrow and contested majority, concentrates the power firmly in the hands of the President: after abolishing the position of Prime Minister, the head of State now has sole responsibility for forming the government, thus monopolising the executive power; he also has broad legislative prerogatives and a large influence over the judiciary, notably by way of appointments.
However, the authority still establishes its legitimacy on representation of the people’s will: the President is omnipotent – but he is now elected by direct universal suffrage. In 2016, on the night of the attempted coup d’état, Erdoğan exhorted his supporters, live via the Face Time application, to ‘take to the streets to resist the attempted coup and to defend democracy’, once again pitching the power of the ballot box against that of the tanks. The Turks who lost their lives during the confrontations with the putschists were described as martyrs of democracy. To top it all, the traumatic episode of the bombing of Parliament by the putschists is seen as proof of their disdain for popular will.

Installation of an Authoritarian Regime That Has Its Limits

Is this a limitation of any counter-power to the now all-powerful popular will, the establishment of a people’s dictatorship? Has the regime simply become authoritarian? To what extent has the demotic principle been maintained and could it still enable any political alternation?
Firstly, although Erdoğan currently holds power, it is important to remember that the presidential function, since 2014, results from direct universal suffrage, and that Erdoğan was elected twice in the first round, in 2014 and 2018. Nonetheless, this representative dimension has been sorely undermined in recent years. In the June 2015 elections, the AKP lost its absolute majority and the AKP government found itself unable to govern alone for the first time since 2002. Rather than trying to form a coalition, he opted to call a new election, four months later. This early election enabled the AKP to restore an absolute majority, at the cost of a disastrous strategy of tension. This episode also raised questions over the respect of election results. These same questions came up again, and more insistently, with the April 2017 referendum, for which there was some doubt over the fairness of the referendum; for the first time to such a large extent, public resources were massively mobilised for the ‘yes’ vote. Since 2016, many members of parliament have been incarcerated and several dozen local elected representatives of the HDP (the pro-Kurd People’s Democratic Party) have been relieved of their functions and replaced by administrators appointed by the executive. In such conditions, can we consider that the popular will expressed in the ballot – however biased this expression might be – is actually being respected? The local elections in 2019 provided some answers. Although the opposition came together and was in the lead in the largest cities, would its narrow win in Istanbul be accepted? After several days of dithering, it was decided that the election should be held again in Istanbul; faced with an even clearer verdict, the AKP stepped down, proving that the people’s will still prevailed. 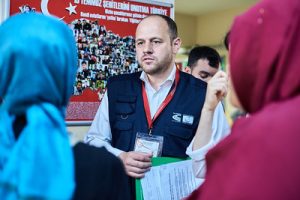 Populism can explain both the genealogy and the foundation of the AKP, how it has managed to dismantle the supervision elements and checks and balances in Turkey, as well as its difficulty to accept the principles of liberalism, and notably pluralism. The concept offers a better description of the regime in place in Turkey rather than employing the somewhat vague term authoritarianism. This populism of a party line promoted by its leader and converted at institutional levels – extreme concentration of powers in the hands of one elected leader – , has tended to laminate the opposition and limit pluralism. This ‘institutionalised’ populism constitutes a particularly fertile soil for electoral authoritarianism, as defined by Schedler(2)A. Schedler, Electoral Authoritarianism: The Dynamics of Unfree Competition (Boulder and London: Lynne Rienner Publishers, 2006.. If, at some point in the future, the popular will expressed via the ballot box ceases to be recognised and accepted (unlike the situation in the largest cities following the 2019 local elections), Turkey would then become a truly authoritarian country.

Elise Massicard is a research fellow at the CNRS/Sciences Po Centre for International studies (CERI). She specialises in the political sociology of contemporary Turkey, studying social movements, political parties and public policies. By analysing the trajectories and practices of the people involved, she considers the borders of politics in particular.