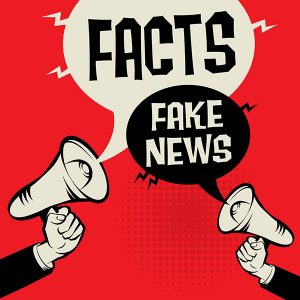 “Fake news”, or infox, have become the great animators of recent elections, from the pro-Brexit campaign in the United Kingdom to the election of the new Brazilian president Jair Bolsonaro, and including various elections in Europe and in the United States. While the casual relationship to truth is not a new fact, what marks a new era is the scope of the phenomenon in terms of the number of actors involved (robots, traditional media, platforms, etc.), and especially the speed of the dissemination of this fake information.

Tempers are flaring and a resistance is organizing, be it on the part of governments or social network and traditional media giants. In Germany, a law against hate speech came into effect on January 1st, 2018, and at the end of 2018 the French parliament adopted a law against the manipulation of information which, among other things, gave judges the power to block contents or websites spreading fake news. The platforms themselves, be it Facebook or Twitter, are trying to self-regulate. Finally, traditional media have created numerous fact-checking departments aiming to more quickly react to the propagation of fake news by checking them and disseminating their results. But what are the effects of these interventions?
This is what I studied with three other researchers in a project called “Fake news, fact-checking and information in times of post-truth politics”. The idea was to test the respective impact of propaganda and fact checking on voters’ knowledge and voting intentions during the 2017 French presidential election. 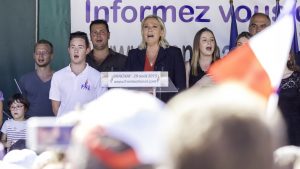 More specifically, we tested the impact of Marine Le Pen’s statements on migrants by querying 2,400 people forming a representative sample of the French population. We randomly divided them into four equally sized groups that we exposed to four types of information: the first one – the control group – received no specific information; we provided the second group (called “MLP” for Marine Le Pen) with Marine Le Pen’s statements using false figures about migrants; a third “statistical” group was only provided with statistics corresponding to these statements from sources like the United Nations, the Organization for Economic Cooperation and Development (OECD), and the French National Institute of Statistics and Economic Studies (INSEE). Finally, a last “fact-checking” group received both Marine Le Pen’s statements and fact-checking elements. All the quotes from Marine Le Pen that we used had a similar structure: the “alternative” fact is used as part of an argument to reach a desired conclusion. For example, on 8 September 2015, on RMC, Marine Le Pen declared: “I have seen images of illegals (…). And these images are 99% men (…) Men who leave their country and leave their families there. They are not fleeing persecution, but are obviously doing this for economic reasons.” This cleverly presented 99% figure does not reflect the statistics published by the United Nations High Commissioner for Refugees (UNHCR), which has assessed that of the migrants who crossed the Mediterranean in 2015, 17% were women, 25% were children, and 58% were men. The erroneous data wielded by Marine Le Pen aims to lend credence to her argument and convince the audience that migrants come for economic reasons.

First of all, our results show that fact checking clearly improves participants’ factual knowledge. For example, while less than 20% of the “control” group’s participants knew the percentage of men among migrants crossing the Mediterranean, over 50% of the “statistical” and “fact-checking” groups knew it at the end of the study. Furthermore, while sole exposure to Marine Le Pen’s statements decreased factual knowledge, the effect of the figures from official sources was much stronger.

Between first impressions and reminiscences 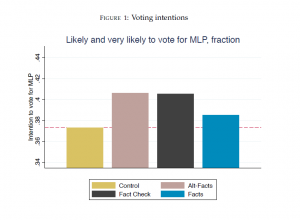 The intentions to vote for Marine Le Pen expressed by the different test groups. Click on the image to enlarge.

While fact checking helps correct knowledge of facts, it has no effects on opinions and voting intentions. When participants were asked at the end of study whether they believed that migrants were coming for security reasons or economic reasons, 35% of “control” group participants selected economic reasons, versus 43% of the “fact-checking” group – a figure that is barely lower than that of the “MLP” group’s 48%! This was also reflected in voting intentions. While 37% of the “control” group stated that they would likely or very likely vote for Marine Le Pen during the presidential election, this percentage increased to 42% for the “MLP” group – a rate identical to that of the “fact-checking” group.

It therefore appears that even though correcting facts improves knowledge, it does not correct initial impressions. Worse still, it any positive effect that fact checking might have is counteracted by the fact that it involves emphasizing a potentially stressful subject for voters. This interpretation is based on the fact that even participants who are only exposed to institutional “statistics” support the Rassemblement National more after the experiment than the “control” group.

This study does not imply that fact checking is useless, since in practice the checking is placed in context and does not just dryly correct the facts but also challenges the arguments. Nevertheless, our work suggests that it is difficult to correct first impressions, especially when they concern potentially anxiety-provoking subjects like immigration. Delivering checked information involves going over the same subject, which can ultimately have a counterproductive effect. Our results reflect similar results in the context of the American and British election 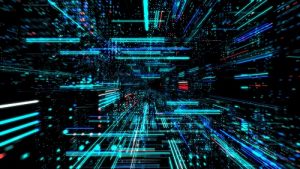 Most interventions aiming to limit the propagation of fake news, be they undertaken by governments, platforms, or traditional media, share the same shortcoming: they attempt to react after the fact. This is notably the case of the French law on the manipulation of information, promulgated last December that allows for the intervention of a judge to end – under certain conditions – the dissemination of fake information. Similarly, fact checking attempts to correct the effects after fake news has already stated circulating. But even if the reaction is quick, it is almost always too late, given the speed of circulation. Indeed it has been established that fake news travels much faster than real news.
Thus, the key appears to be elsewhere, particularly in the idea of slowing the circulation of disputed content. The key for researchers in the social sciences is to understand the mechanisms behind the decision to share fake news, in order to implement policies limiting these behaviors.

Émeric Henry, Associate Professor in Sciences Po’s Department of Economics, conducts his research in microeconomics by establishing links between experimental methods and theory. He particularly focuses on issues related to economics and law, analyzing social issues like innovation, industrial policies, as well as voting and cooperation phenomena. Learn more.

Creative Commons Attribution-NonCommercial-ShareAlike
Fact-checking: between beliefs and knowledge, a tough fight to win