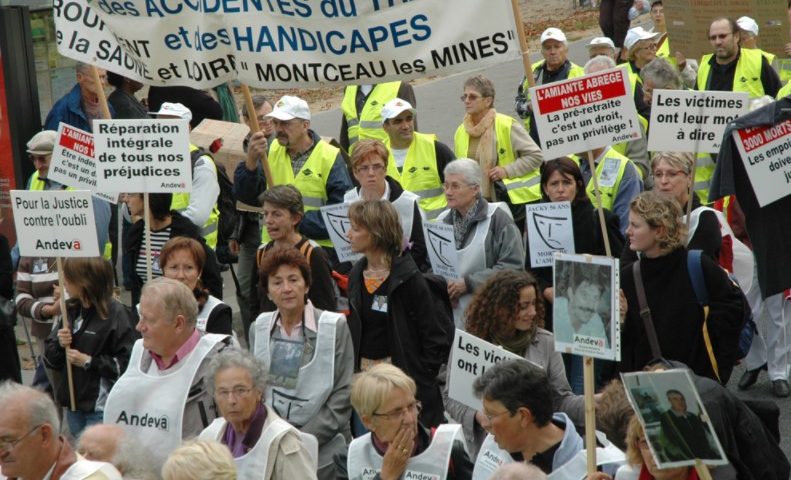 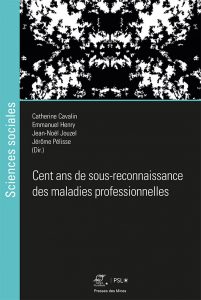 A History of the Lack of Recognition for Occupational Illnesses

Occupational illnesses, such as cancers, musculoskeletal disorders, and psychic disorders, have long been massively under-acknowledged in France and in other industrial countries. The case of occupational cancers provides a striking example of this situation and the resulting social inequalities. More than two million employees, mostly labourers or farmers, have been exposed to carcinogenic substances in their working environments (wood dust, pesticides, radon, ionising radiation, etc.). Based on the epidemiological and toxicological data available, it is estimated that this exposure causes 15 to 30,000 new cases of cancer each year. However, fewer than 2,000 are recognised as occupational illnesses, and the figure falls below 300 if asbestos-related cancers are excluded. Although our knowledge of the links between the onset of chronic illnesses and exposure to toxic substances or harmful working situations has improved, the harmful effects of work on our health continue to be largely ignored. This is true in the field of statistics (work and health), as well as from legal and media standpoints. This invisibility is a source of concern mainly because it reflects the long-standing stalemate situation of social protection in the world of work.

Progress in Theory, but Limited in Reality

This law created the legal category of occupational diseases that were eligible for set compensation subject to certain conditions (i.e. not integral, as certain courts ruled, albeit rarely, in such cases prior to the text being adopted). 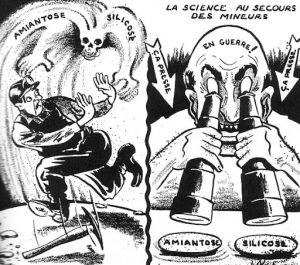 However, since then, obtaining compensation for work-related pathologies has come up against chronic difficulties. These difficulties are also found in other countries, including Spain, Brazil and Belgium, whose situation is also analysed in this publication.

To understand the reasons for this century-long lack of recognition for occupational illnesses, the book reviews the ‘1919 moment’ and the social and political debates that took place concerning the adoption of this law. By applying to occupational illnesses the principle of presumption of origin for occupational accidents defined by the law of 9 April 1898, the new law was presented as being advantageous for workers, since it included pathologies whose causal link with their professions was not entirely self-evident. Any employee meeting the administrative conditions set out in the ‘tables’ of occupational illnesses could claim this right, even if they had been exposed to risk factors unrelated to their professional activities.
The recognition of occupational illnesses immediately met with many obstacles and limits after the law was adopted. Although the scientific data were incomplete at the time, the balance of political power between employers, government and labour unions, largely in favour of the former, came into play to limit the actual possibilities of compensation. In cases of disorders due to lead poisoning as well as occupational cancers, the first tables of occupational illnesses adopted during the period between the wars were defined by negotiations that significantly reduced scope for obtaining set compensation for work-related pathologies. Since then, and even until today, this history has set the course for the institutional approaches by which the knowledge available on work-related disorders is only sparingly translated into law.

The Extremely Imperfect Association of Activism and Science

The second part of the book highlights the weight of this inheritance by examining the social battles that, since the 1970s, have been clamouring for compensation for new occupational disorders, such as psychic pathologies and disorders related to ionising radiation or silica. The authors investigate the contrasting effects of scientific and legal changes related to knowledge and recognition of the impact of work on human health. These changes initially appear to favour the workforce. The law has become more flexible, offering (although not before 1993)(3)Loi n° 93-121 du 27 janvier 1993 portant diverses mesures d’ordre social, JO n° 25, 30 janv. 1993, p. 1576 an additional opportunity for compensation for workers suffering from pathologies that are not listed in the tables of occupational illnesses or that do not meet the criteria determined by the existing tables. This opportunity notably includes the possibility that some psychic disorders might be recognised as professional illnesses. 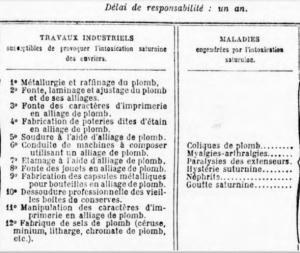 Extract from a table of occupational diseases recognised by the law of October 25, 1919. Journal officiel.

Science has since obtained new data from administrative and associative surveys of cases of exposure to increasingly diverse risk factors and the gradual development of epidemiology as the reference knowledge field in terms of professional health. These new data nourish the collective actions that criticise the lack of recognition for occupational illnesses, and thus enable compensation for new pathologies. However, on the other hand, these actions also help to give more weight to scientific data, in spite of the insubstantial and limited nature of said data. The additional opportunity for compensation provided in 1993 thus requires employees to prove the link between the deterioration of their state of health and the risk factors to which they were exposed, even though the data required may not always be available. Furthermore, epidemiological studies improve the visibility of not only professional risk factors, but also the multi-factorial nature of work-related pathologies and their possible links with extra-professional causes, such as “lifestyle” and “risk behaviour”. This can result in clever, political usages in favour of prudent recognition of occupational illnesses, and even the revision of some tables and a tightening of the conditions under which the professional origin of certain diseases might be recognised. In the 2010s, such revisions contributed to the drastic reduction in the recognition of some shoulder disorders related to repetitive actions (musculoskeletal disorders), whose rate of occurrence had significantly increased over the two previous decades.

The last part of the book examines the role of the social organisations responsible for implementing the recognition of professional illnesses: doctors responsible for writing medical certificates, occupational doctors working for local authorities, judges ruling on compensation refusals, etc. These players hold strategic positions in the procedures for obtaining compensation for occupational illnesses, regardless of whether their field of specialisation is medical or law-related. 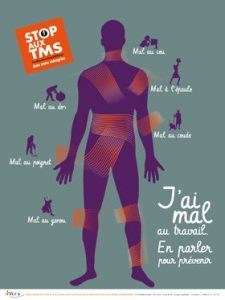 A study of the logic in which these professionals structure their opinion of the link between work and health reveals unequal access to the data available. This means that they have to rely on their own, often limited, knowledge of the working conditions of employees suffering these pathologies in order to determine whether or not their problems could have been caused by their jobs. It has thus become more difficult for workers to obtain compensation due for damage to their health caused by working.

Advocating for better recognition and compensation for work-related disorders, this book places its collective discussions in the perspective of the reform of a system that is becoming obsolete. Compensation for damage to health caused by work, which is currently the subject of multiple debates on topics as diverse as the need for integral compensation and employer demands to abandon the principle of presumed imputability, will benefit from being viewed as the product of a historical construct. Unless we consider the lasting effects of this lack of recognition in terms of invisibilisation of the issue and the fact that the government is under no pressure to find solutions, earning a living at the cost of one’s life may well continue to be an obvious and largely ignored reality in the working world, most particularly in the categories of workers with the fewest privileges and the highest exposure to multiple occupational risks.