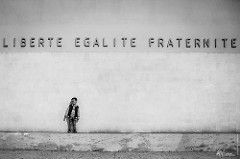 A myth worth revisiting

Does France, the so-called country of human rights, display exemplary equality? This is the question that Réjane Sénac seeks to answer in her book Non-brothers in the Land of Equality (Les non frères au pays de l’égalité) by analyzing “French-style” equality as a myth. Analyzing equality as a myth involves examining the contemporary implications of the conscious and unconscious legacies of the “Liberty, Equality, Fraternity” triptych. This approach focuses on a key question that addresses a blind spot: who are the brothers and who has been excluded from this republican fraternity – termed “non-brothers”?

To describe French-style equality as a myth is to recognize and condemn the idealization of an unrealized principle. This equality can be understood as a mythology along the lines defined by Roland Barthes: that is, as part of a hidden and depoliticized world of meaning.

In order to break the taboo on the French Republic’s original fraternal sin, she questions both the history and the modernity of the boundaries between “brothers” and “non-brothers”. Despite the fact that the Republic defines itself as “one and indivisible”, it has always classified and ranked citizens. It would therefore appear necessary to detect how this Republican paradox manifests itself today.

According to Sénac current calls to strengthen fraternity in response to fears of segmentation and “sectarian breakdown” of the population, reveal French society’s blindness in pushing for a bond and unity under the term fraternity, which carries an exclusive conception of democracy.

The temptation of equality subject to performance conditions

Does the dissemination of arguments in the public debate such as “women do politics differently”, “more women in corporate leadership positions add value” and “diversity is good for business”, reflect an effective and benevolent pragmatism with regard to non-brothers, or rather a conservative ideology reconfigured to appear more respectable?

Réjane Sénac answers this question through a study of reports, speeches and qualitative research on public justifications for inclusion policies covering “non-brothers” – the promotion of gender parity and of diversity for “non-whites”. She thereby tests the hypothesis of cross-modernization of the myth of equality and of the complementarity of non-brothers.

According to Réjane Sénac, the pragmatic dimension of the performance imperative for diversity should not obscure its political nature. In a context of crisis and distrust, the temptation is strong to portray equality policies as a social investment, without recognizing that equality then becomes subservient to demonstrating the performance of difference as a modern and pragmatic value.

To overcome this temptation, Réjane Sénac analyzes the continuity between a historical process that excluded “non-brothers” because of their alleged natural “lesser value” (such as arguments justifying the exclusion of women from the right to vote) and the inclusion they are offered today because of the performance of diversity. She shows how and why it is a fallacy to believe that the end justifies the means without considering that the means determine the end.

The time for resistance: Untethering equality from fraternity and from the market

The practical implications of this type of justification are twofold. First, when diversity demonstrably performs, non-brothers are included as complementary rather than as equals. Second, if the performance of equality or anti-discrimination measures cannot be demonstrated, then equality becomes an irrational option.

Thus, according to Réjane Sénac, instead of sanctifying fraternity and seeking to rebuild it, the time has come to dismiss it, because it is excluding. Indeed, an alternative must be conceived to create a society without domination at both the individual and collective levels. To achieve this, a two-pronged resistance is needed to untether equality from fraternity and from the market.

About the book, “Non-brothers in the Land of Equality”, January 2017, Presses de Sciences Po.