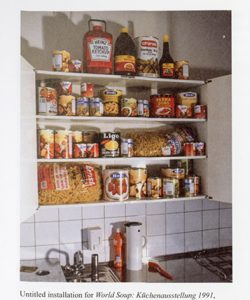 Since the early days of the 1990’s, Peter Fischli and David Weiss have replicated ordinary household items using an expanding polyurethane foam, robbing this material world of its very materiality. What remains, then, of these useless objects? What meaning can we find in this flattening of reality, and why did these artists choose objects already used and consumed? Ileana Parvu studies their work as signs to be deciphered.

The value of things. The objects of Peter Fischli and David Weiss

When, at the beginning of the 1990’s, Zurich born artists Peter Fischli and David Weiss started replicating household items, they turned to a material made mostly of air. Their work with expanding polyurethane foam is therefore akin to shaping voids. This replicating endeavor seems to completely deny objects their materiality. ‘We took everything from them’,1P. Fischli, [interviewed by Ileana Parvu], June 2013, Zurich. would reiterate the artists when making their works. Can we, however, consider them as accomplishing the mutation from object to sign that Jean Baudrillard put forward in the conclusion of The System of Objects in 1968? Are they simply facades, depthless objects beyond which nothing exists? This superficiality must nevertheless allow for the place these works inhabit in space, their scope, the spread of their materiality. While they are, in effect unusable, are these polyurethane objects not full of the echo of those who used them regularly and of whose lives they followed, step by step? 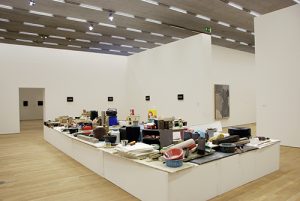 You can hardly tell

The reproduction of objects, in the work of Fischli and Weiss, had two beginnings. In 1991, the artists were starting this work anew, for the second time. Indeed, a decade beforehand, they had already carved and painted polyurethane to make the sixty-two components of The Raft (1982-83). However, in harking back to this practice, they tightened the bond between the sculptures and their referent : the works from the 1990’s are hard to distinguish from the objects they were modelled on (fig. 1).

Because of this close resemblance, Boris Groys considers Fischli and Weiss’ replicas as similes of ready-mades. For him, the origin of these sculptures is not, in and of themselves, things but artworks, formed by the introduction of objects of consumptions into the world of art. This interpretation is challenged by Arthur Danto. The objects of Fischli and Weiss are in no way imitations of ready-mades, but rather imitations “tout court”, trompe l’œils.2A. C., Danto, ‘Play/Things’, Peter Fischli David Weiss: In a Restless World, Minneapolis, Walker Art Center, 1996, p. 110. Indeed Groys misinterprets when he infers that by reproducing ready-mades Fischli and Weiss are advocating for slowness of execution and the patient toil of the craftsman. It remains, however, that their sculptures foster an undeniable link with the ready-made, and that one does not need to reject this relationship. Between ready-made and trompe l’œil, there is no need to choose: the works of the two artists are entwined with both histories. 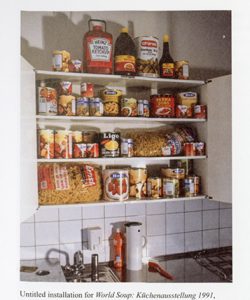 In the kitchen of Hans Ulrich Obrist

Moreover, in 1991, Fischli and Weiss did not shy away from exhibiting ready-mades. When Hans Ulrich Obrist, then but eighteen, invited them amongst others to present a piece in his flat’s kitchen in Saint Gall, they decided to fill the cupboard above the sink with various foodstuffs from a grocer (fig. 2).

‘His kitchen will become a kitchen’.3P. Fischli, [interviewed by Ileana Parvu], June 2013, Zurich. If Peter Fischli is to be believed, Obrist had no use for the space and would usually eat out. However, once months started to go by, the artists noticed with satisfaction that he had ceased to consider the cupboard as a work of art. The tins had been opened, starting by the chocolate custard pots. A year later, Fischli and Weiss once more made use of ready-mades when they won the contest to decorate the newly built Zurich stock exchange. In fifty window displays they arranged various objects, from luxury goods to artefacts, from Swiss material culture to the latest models in sports and automobiles (fig.3). If the specificities of the sites which welcomed these installations in 1991 and 1992 can easily explain this preference for the ready-made, above all, this choice sheds light on the type of objects the artists chose to execute in polyurethane at the same time. 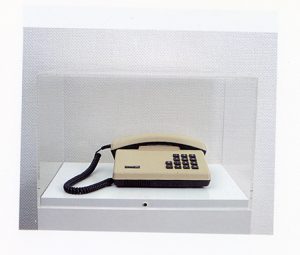 The loss of consistency is a recurring subject in writings of the 1960’s. In The Society of the Spectacle, life itself is robbed of its substance. “Everything that was directly lived has moved away into a representation”.4G. Debord, The Society of the Spectacle, 1st edn 1967, Paris, Gallimard, 1992, p. 3. Nor did objects offer refuge for solidity. Baudrillard posited that they constituted signs one can accrue indefinitely. This effect, where reality is flattened, reemerged some twenty odd years later under the guise of the concept of depthlessness, which Fredric Jameson puts forward to account for postmodernism. The polyurethane objects made by Fischli and Weiss seem to stem from this school of thought. What advantage, then, can be gained from these objects, when they lack the functionality of their models? Only the image of their referent remains within them. Might we not then use the words of Baudrillard – toying here with etymology – to describe them as ‘res nulla[e] […] good for nothing’?5J. Baudrillard, For a Critique of the Political Economy of the Sign, London/New-York, Verso, trans. by C. Levin, 2019, p. 231. 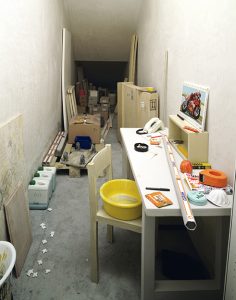 However, is taking the path of the image forcefully taking the path of superficiality and loss? Is it akin to turning away from what gives life its relief? When Peter Fischli calls the polyurethane sculptures ‘thoughts, ghosts, reproductions’,6P. Fischli, [interviewed by Ileana Parvu], June 2013, Zurich. one might think he is indebting them to their models, condemned to being their shadow. While he does indeed tip them on the side of the sign and the reproduction – the German word for “reproduction”(Abbild) is moreover built from the word “image” (Bild) – it is only so he can better fill them. Their materiality is not solely found in the swelling of the polyurethane foam, giving body to the works, it is also – above all – found in the ties that bind these objects to users. In Fischli and Weiss’ installations, there is someone (fig. 4). These people, raised by the sculptures, are never far away: they have simply stepped out. It is the use they have of these objects that make them happen.

For there is no hint here of the consumption described by Baudrillard as an accumulation of objects as signs. Fischli and Weiss represent used objects, leftovers, usually considered like junk, and yet too early, still, for them to discard. Food is also very much present in their installations, and the artists never miss an occasion to remind the spectator that some have already been ingurgitated. These replicas therefore join the ready-mades assembled in Obrist’s kitchen cabinets or in the window fronts of the Zurich stock exchange: the flow of life has objects as a constant companion.

By organizing their installations around the invisible figure of the user, Fischli and Weiss extract objects from the never-ending loop to which the principle of equivalence has confined them to. Jacques Derrida underlined that it is ‘the thing itself7J. Derrida, Donner le temps. 1. La fausse monnaie, Paris, Éditions Galilée, 1991, p. 98 that one misses if one considers that, just as signs, objects are interchangeable. An exchange-based logic flattens them, denies them their singularity. If the object, as it is conceived in the work of Fischli and Weiss, escapes from indifference and indistinction, from the captivity of what Jean Bazin has called the ‘permutation of items’,8J. Bazin, ‘La chose donnée’, in Des clous dans la Joconde. L’anthropologie autrement, Toulouse, Anacharsis Editions, 2008, p. 553. it is because the artists highlight the value in its use. They expand on it, further it by reflecting on the effect it has on those who use it. Their installations are not made out of goods involved in an exchange system, but out of things that capture us and invite us to study their presence. 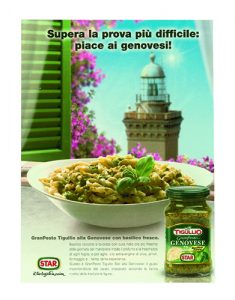 The depth given by Fischli and Weiss to their sculptures is however not the one of bygone objects. The artists are not looking to the past, nor are they seeking to return to a pre-consumer society era. In their works, it is signs that are given body. Or images. In 2007, editor Michael Ringier invited them to produce a work for the publication of the annual report of his press conglomerate. For this project, they decided to work from advertisements. Aware as they were of the critical theory on consumerism developed on the 1960’s, theystill took a slight step away from it. If Debord had set the image against life, taking it as far as implying that the first impeded the second, Fischli and Weiss combined these two elements. Their book Sonne, Mond, und Sterne (Sun, moon and stars) brings together a thousand advertisements, organized following the course of life, from birth to adulthood. It ends by the mention of foodstuffs (fig. 5). Just like in the polyurethane objects, the image swells and expands from a dark center that Peter Fischli calls a ‘core’9P. Fischli, [interviewed by Ileana Parvu], June 2013, Zurich. : the lifelong need that drives us towards things.

Baudrillard, J., For a Critique of the Political Economy of the Sign, London/New-York, Verso, trans. by C. Levin, 2019.