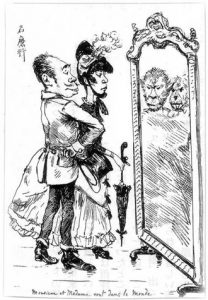 What kind of war do countries plunge themselves into when they claim to be the source of some sort of novelty?  While exact reproduction may be more profitable, this does not suffice to ensure the reputation of a country or an industry that has to innovate in order to dominate. Michael Lucken studies Japan, which is renowned but also despised for its propensity for copying without inventing, even though the arts of Japan have been admired and imitated in the West.

The Critique of Imitation and the Logic of Domination

The artist who creates something is a model.  He who imitates is lowered to the status of a mere artisan.  The employee who “creates value” is favored both socially and economically; he who reproduces a gesture in mechanical fashion is treated in a disadvantageous fashion on every level.  The country whose industry is creative is in a position of dominance; the one whose industry is not innovative feels itself in the grip of the other country.  The polarization between imitation and creativity defines one of the main axiomatic systems of modern civilization.  Now, such polarization tends to give a (positive or negative) value to difference and is generative of a certain amount of violence.

Japan furnishes us with privileged source material for the study of this issue, which has political and social implications but which is above all aesthetic in nature. On the one hand, Japan has long been both despised and feared for its propensity for copying.  On the other hand, Japanese art forms have been copiously imitated in the West.

After having observed how Japan had itself contributed to the spread of this system of values within Asia, we shall reexamine Western representations of Japan as an imitator, and we shall then analyze how these categories have served to establish a hierarchy of identities.  This study is intended to contribute to a better conceptual rootedness for the question of Orientalism as a system of values—which implies a dismantlement of the various facets of a complex mechanism.

The Mark of Romantism

From 1889 to 1945, Japan experienced an unending series of conflicts.  Now, this period corresponds, as a matter of fact, to the emergence of Romanticism within the Archipelago.  It is in that context that a tripartite discourse emerged: “We are imitators”; “We have to become creators”; “It’s the Chinese who are the imitators.”  These claims in favor of creativity proved to be double-edged: while they may be interpreted as a will to develop an original culture, one can also see therein the sign that Japan has not only borrowed forms and techniques from the West but also some of its conceptual schemas.  Though Japan may have boasted of its ability to learn from the West without losing its soul, it is undeniable that modern ways of thinking were adopted there in the most deep-seated of ways.  Consequently, all clear-cut oppositions between a “Japanese mind” and a “Western mind” are skewed, for the conceptual presuppositions on which heuristics and epistemology are based in Japan are the same as those in Europe and the United States.  No scientific discourse, therefore, can escape this logic—those discourses bearing on the specificity of the Japanese mind no more than any others.  To the contrary, by their intensity, they underscore how deeply imbued this logic was.que les préoccupations de nos ancêtres en matière de déplacements d’œuvres d’art dans des contextes de rapports de force asymétriques (y compris donc à l’époque coloniale) sont aussi les nôtres : il en va toujours des arts et de leur conservation en rapport avec l’idée d’humanité et de civilisation.

In the eighteenth century, the idea came into force in France that the Japanese had a penchant for imitation.  In the course of the following century, two critical lines were brought out.  The first stated that the Japanese were constantly copying other nations—which implies continual change.  The second one maintained, conversely, that they aspired only to do the same thing over and over again, never inventing anything.

Orientalist discourses always espoused one or the other of these two lines: the first branched out into the notions of counterfeiting, fickleness, and modernity; from the second came the ideas of immutability, conservatism, and lack of originality.  Contrary to appearances, these two branches are of the same trunk: when it was said that Japanese culture is situated “between tradition and modernity,” it was being suggested, in fact, that it has always been engaged in acts of imitation, either of the West or of its own past.

When, between 1895 and 1910, the Japanese assertion of their might challenged the colonial order, Europe began to worry about the Asians’ potential to turn round against itself the very arms it had given to them.  The Yellow Peril constituted an upheaval in the mimetic order.  The West looked down on Japan in principle but took umbrage when its interests were at stake.

In truth, it was their dangerousness that, starting in the late nineteenth century, made of the Japanese imitators of a special kind in the Western imaginary.  The irritation provoked by their ability to use Western models lay in direct proportion to their ability to remain independent.  Paradoxically, it was because they were autonomous that they were especially reviled as imitators.

The We and the Other

Whatever it might claim, the Romantic We refers not to Man, whatever his time or place; it implies, on the contrary, a Them.  Now, this Them refers back both to a diachronic form of alterity—We, the Moderns; They, the Ancients—and to a spatial form of alterity—We here, Them over there.  The distant and the ancient are here superimposed, and the mimetic mindset is to be understood as one of the principal traits that bring them together.

To these initial characteristics must be added a sexual and intellectual (and/or social) process of differentiation.  The idea that women are passive and not very much oriented toward innovation was standard fare in the nineteenth century.  Likewise, peoples and masses are often described as inclined to appreciate only imitative forms of art.  One has only to think of Charles Baudelaire’s denunciation of  photography.  The rejection of establishments like the Musée Grévin wax museum or of such realist innovations as stereoscopy, both standard among intellectuals, head in the same direction.

All critical discourses about imitation since the nineteenth century establish a contrast between an inferior historical, geographical, or sociocultural referent and a superior We whose qualities, discerned by way of contrast, are those of being evolved, imperial, masculine, and bourgeois.

The Denial of Imitation

Japan was intensely imitated in the nineteenth century.  How was it possible for European artists to take as a model a country that, within a system that rejected imitation, was being pointed out for its proclivity toward copying?  In fact, creation ex nihilo being utopian, the Romantic system implies having recourse to legitimation strategies.

The first of these, at once the most trivial and the one most generally practiced, consisted simply in denying or belittling the other’s creativity while masking, in one’s own work, the imitative part.

The second strategy, hardly more elaborate, played on covering one’s tracks and compartmentalizing spaces.  It willfully employed such ill-defined notions as influence or inspiration.  But concretely speaking, it accepted one’s having recourse to models, if those models lay outside the usual set of references—in other words, if, in a purely empirical manner, they gave a greater impression of novelty than of déjà-vu.  Typical here is the way in which Théodore Duret, in his Critique d’avant-garde (1885), idealized Japanese painters so that their works might be able to enter into his system of values.

The third method used to reconcile oneself with imitation consisted in filtering the model through a discourse or some sort of rational technical process that would allegedly transform mimesis into cosa mentale. This solution fits as a sort of extension of classicism, where imitation corresponded to a kind of learning process, whereas genius was viewed as being the prerogative of maturity.  Caught in the meshes of an attempt at logical reorganization, imitation and everything relating to it lost their negative characteristics and became, on the contrary, the allies of theory.

These strategies may be observed throughout the twentieth century.  While in Europe Eastern influences were positively championed by a number of major artists, Western influence on Japanese or Chinese artists was, on the contrary, assigned a negative value.  It is tempting to object, in regard to this remark, that the two movements are not to be placed on the same level and that Asians have taken up techniques while Western artists have been inspired by a spirit that liberated them from the shackles of representation.  The former group, it would therefore be said, went about imitating in servile fashion, while the latter would be said to have carried out a higher form of creativity.  Beyond the fact that this distinction takes on meaning only when one starts from a Western-centered point of view, it is clear that, in the work of numerous Western artists, some formal borrowings from Asian art do occur.  It is, moreover, obvious not only that Oriental artists have borrowed some techniques but that, behind technique, often to be found in them is a will to reformulate the idea of freedom and, more broadly, some issues of a spiritual nature.  The considerable amount of interest some Japanese artists had in Christianity in the early twentieth century is one flagrant sign of this.  In fact, this dissymmetry is expressive of a system at work: in order that avant-garde movements—which were revitalizing themselves by borrowing from the outside—might, despite the taboo on imitation, be considered truly creative agents, it was the Other’s way of imitating that had to be the wrong one.

When Creating Boils Down to Imitating

In the late nineteenth century, artists from all over the world came to Paris in quest of recognition.  But the conditions for acceptance within the sanctum sanctorum were both Draconian and opaque.  Foreign artists could not hope to gain recognition if they used techniques and subjects native to their own original culture.  No Japanese painter who presented Chinese-style works in ink met with any lasting success in France.  The technique and the themes therefore had to be familiar enough not to bring on a reaction of rejection.  In other words, the artist had to, at some moment in his training, make the conscious effort to extricate himself from his culture’s forms, so as to imitate those of Europe.

And yet, ideally, the Romantic We commanded one not to imitate either objects or masters—every model being, by definition, transitory.  This We could not be grasped through forms; it could be rediscovered only on the level of principle, by accepting the postulate that art implies that one does not imitate.  Nonetheless, for he who did not spontaneously identify with the We in question, whether that be for cultural reasons or for social ones, any effort to take up this idea as one’s own presupposed a form of imitation.  Here we have the paradoxical experience—a veritable conceptual wall—with which generations of Asian artists have been confronted, and this until the 1960s: learning how not to imitate boiled own, despite all, to imitating.

YAMADA, Shōji. Nihon bunka no mohō to sōzō: orijinariti to wananika (Imitation and creativity in Japanese culture: What is originality?). Tokyo: Kadokawashuppan, 2002.