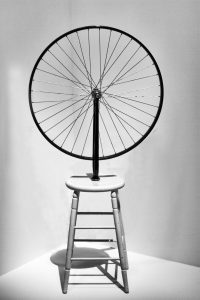 The readymade is one of art history’s most used, discussed, studied object. It is almost never written in the same manner, and its definition is made all the more unstable by Duchamp’s own refusal to make it into a “school”. In his wake, generations of artists have subverted it for their own profit, sometimes according to terms much removed from the inaugural act. Thierry Davila, in order to measure the gulf between the instigator of the readymade and his followers, has gone back to its source.

Could the readymade be the most significant type of object in modern and contemporary art? Beyond being an object, it is a procedure described repeatedly by Marcel Duchamp, the result of which profoundly and lastingly revolutionized our vision of art and its history. It might therefore be useful to revisit the circumstances in which a readymade can be made, through Duchamp’s own writings and statements on the subject, in order to apprehend – and understand – this typology since its inception. We might then notice that many of the contemporary readymades are fruitful misunderstandings of the original act.

The history of a word

First and foremost, let us start with the word itself. Duchamp uses it for the first time in a letter sent on the 15th of January 1916 from New York to his sister Suzanne. He writes it as one : readymade [1] . The history of the word shows that this spelling is not the only one possible. Indeed, it appears in English in 1440 (redy made) and evolves over time (for example, one finds the mention of a ready made in 1631). From around the middle of the 19th century (1844), its spelling stabilizes: written as “ready-made”, it is increasingly applied to the manufactured production of clothing. Its French translation since 1951 is “prêt-à-porter” (ready-made clothes)[2]. Duchamp, therefore, when he first uses it, writes the word in a novel manner: the two iterations that were previously separated (ready made, ready-made) are brought together (readymade). Ultimately, one finds three spellings of this word, two by Duchamp (readymade, ready-made) and another in the literature attending to Duchamp (ready made is used, for example, by Breton in his definition of the category in his Dictionnaire abrégé du surréalisme)[3]. There is, for Duchamp, at least one other word with such orthographic elasticity: the word “infrathin” (inframince) coined by the artist, also written in three different ways (infrathin, infra-thin, infra thin). This is the first link between two words representing deeply interconnected ideas: in effect, the readymade, as an object, is with infrathin.

An object with writing

But how does one make a readymade, how does one make an already made object? In the previously quoted letter to Suzanne, Marcel Duchamp qualifies the readymade of “object with writing”. What does he mean? That, in order to invent an already made object, you must “inscribe the readymade”[4]. Duchamp outlines this in a conference organized in 1961 at the MoMA, in New York : “ An important characteristic : the small sentence that I would write on the ready made from time to time. This sentence, instead of describing the object like any title would have, was meant to carry the mind of the spectator away to more verbal territories”[5]. Placing an inscription on a readymade consists in adding a sentence to the artefact “because it adds a color, if you might, in the most literal sense. It is a verbal color”[6], specifies Duchamp once more, in one of his last interviews. Inscribing a readymade means taking the object away from the retinal, and further away still from the illustrative aspect of language, practiced here in an illogical and non-descriptive manner. Today, almost all of the inscriptions imagined by Duchamp  have been lost, just like the original versions of his readymades, except for Peigne (1916). In any case, the written object is not a narrative one.

The second stage, which comes first chronologically and can be done in two ways, consists in turning the readymade into a temporal object. Firstly, through a set relationship with time, by way of horlogisme (“timing”). “Specifying the readymades” should be done “at such day, such date, such minute”, “it is almost like an appointment” puts forward Duchamp[7]. Specifying the readymades is the result of the fortuitous meeting with an already made form, it is a matter of schedule – and we know that, for Henri-Pierre Roché, Duchamp’s most beautiful work is his schedule [8]– which opens up the possibility of choice. The already made form becomes a readymade over time, through chance and choice. Depending on opportunity and not on taste, it is a circumstantial object. Secondly, the readymade is also a temporal object because it is an artefact on which time is registered: that is to say, written: “it is almost like an appointment. – Write naturally this date, hour, minute on the readymade as information”, specifies Duchamp[9]. Such an inscription can be found on Peigne: one can read “daté feb. 17. 1916. 11 A.M.” (this date written in French and English corresponds to the third birthday of the opening of the Armory show in New York, a key date for the birth of modern art in North America). At any rate, the readymade is doubly a temporal object, doubly an object in time.

Lastly, a third stage consist in making the readymade into an indifferent object – and one you can be indifferent to. When Pierre Cabanne asks : “What determined the choice of the ready-mades?”, Duchamp answers : “It depended on the object; overall you had to fight the “look””, before adding : “you have to arrive at something of such indifference that you have no esthetic emotion. The choice of the ready-made is always based on visual indifference as well as the total absence of good or bad taste”[10]. This well-known statement signals that the indifference materialized by the readymade is foremost visual: it personifies an anemic visibility that conditions its esthetic devitalization. That is to say, according to Duchamp, it produces a “complete anesthesia”[11]. One can walk – one should walk – by the readymade without noticing it. Specifically, it is present by its absence – in its condition of qualityless object -, it is there by nullifying all the tools one might use to evaluate it, that might elevate its esthetic. It is here to deny all judgment of taste. This is why the readymade does not need a public, because it “is not here to be looked at, really. It is merely there”. To this, Duchamp adds: “One might notice, through sight, that it exists. But it is not contemplated like one contemplates a painting. The idea of contemplation disappears completely”[12]. Making a readymade is also, then, inventing a type of invisibility, it is depositing an indifferent difference in the world, it is inserting an infrathin difference in the system of objects. This is also the reason why the vast majority of readymades were seen by few, and shown quite belatedly (the Porte-bouteilles (1914), for example, was only shown publicly in 1936, during the Exposition surréaliste d’objets, organized by André Breton at the Galerie Charles Ratton in Paris, from the 22d to the 29th of May): as modest objects, as indifferent objects, it was not essential to position them within a space to be looked at.

At once written object, temporal object and indifferent object, the readymade is therefore a more complex artefact than one often imagines. Duchamp invented a number them to which he gave varied qualifiers without necessarily given further details: semi-readymade, aided readymade, assisted readymade, provoked readymade, distanced readymade, reciprocal readymade, sad readymade, sick readymade are the sub-categories in which the tout fait can be classified, yet another proof of its profuseness.

The latter is ultimately governed by at least two essential rules. The first is that of scarcity. Duchamp himself writes it down in one of his notes “limit the number of readymades per year?”[13]. This therefore means that “it is parsimony, if you will, that is recommended as a method for the production of readymades”[14]. Duchamp adds, once more, at the end of his life: “Do not forget, I am not at all trying to build a school of the ready-made. Far from it!”[15]. It goes without saying that by propagating readymades on the art scene, by saturating it, even, with already made forms, the Duchamp legacy has, rightly or wrongly, distanced itself from the maiden act. Secondly, as we have already underlined, the readymade is branded by its own discretion: making a readymade is inventing an already made form whose inaugural fate is to be forgotten. Here too, Duchamp’s legacy has worked against his original deed: by making the readymade a hypervisible and hyperexposed object, it has substituted retinal devitalization for spectacular display. The initial procedure, the act of making a readymade, has been deeply transformed by these shifts. They have also established as totemic to modernity what had, originally, been carried out by distraction, by curiosity, by idleness, perhaps at the whim of a leisured trip in the infrathin.

Kamien-Kazhdan, A., Remaking the Readymade. Duchamp, Man Ray and the Conundrum of the Replica, Abigdon, Routledge, 2018.

Thierry Davila is curator at the MAMCO in Geneva, and teaches at HEAD-Genève. He is currently editing a dictionary dedicated to the life and work of Marcel Duchamp, to be published by Flammarion in 2021. On the subject of Duchamp, he has authored De l’inframince. Brève histoire de l’imperceptible de Marcel Duchamp à nos jours (Éditions du Regard, 2009, 2nd ed.). His essay, « Duchamp with Mallarmé » was recently published in n°171 of October.