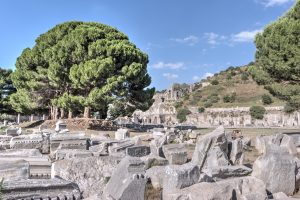 Applying recently developed econometric methods to analyse trade flows in Antiquity may seem bold. It is what Thomas Chaney, a researcher in the Department of Economics, has been doing with the help of archaeologists. The research has yielded compelling results.

Given this successful approach, why not apply it to other social issues that appear to be far removed from econometrics? This is the subject of new research that Thomas Chaney is conducting with support from the European Research Council(1)Historical Migrations, Trade, and Growth, European Research Council Advanced Grant. His goal is to study the economic and technological impacts of the emergence of cities, and in particular the side-by-side living of the ‘natives’ and foreigners residing in them.

Your first project consisted of researching cities of the Assyrian kingdom that disappeared 4,000 years ago. You used a very contemporary econometric method to analyse trade flows. What were the findings?

Thomas Chaney: The gravity model(2)Thomas Chaney, The Gravity Equation in International Trade: An Explanation, Journal of Political Economy ©2018, University of Chicago posits that trade flows between two countries or two cities are proportional to their size, and inversely proportional to the distance between them. In fact, the foundation of this gravity model that perfectly applies to contemporary trade is the idea that merchants, firms, and consumers exploit arbitrage opportunities. It claims that if a good can be found in a foreign country at a cost below the local cost, after accounting for transportation costs, it is profitable to import it. 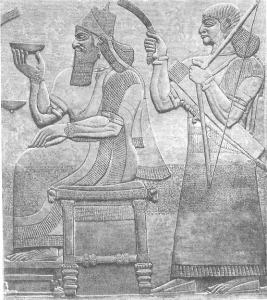 This is exactly what Assyrian merchants did: they crisscrossed their region of the world searching for profit opportunities; they had a network of agents, spread across the cities, who kept them informed of price changes in local markets; caravan leaders followed an optimal route through the Anatolian mountains… In short, their behaviour was very similar to that of contemporary players.

This approach helped you locate Sumerian cities engulfed in the sand for 4 millennia?

Thomas Chaney :We were unable to locate the cities down to a kilometre radius, but our results were quite close to those of archaeological research. To carry out this work, we analysed thousands of clay tablets that merchants exchanged at the time, and identified the information on trade flows. By combining these data and the gravity model, we were able to form conjectures on the location of these lost cities. A highly simplified gravity model allowed us to translate a trade flow into a physical distance. Then all we needed was data on the flows between at least three known cities, and a lost city, to ‘guess’ by triangulation where the lost city was located. In fact, it’s the same way the GPS receiver in our smartphones works, using the distance in relation to three satellites to ‘guess’ where we are.

Did these results convince you of the feasibility and relevance of applying this method to other questions rarely addressed this way in economics?

Thomas Chaney: Yes, because thanks to this approach, we were also able to estimate the relative sizes of ancient cities, albeit with large margins of error. Our preliminary analyses suggest that being at a crossroads is a determining factor in a city’s prosperity. This observation suggests that direct, interpersonal interactions between individuals from diverse backgrounds are at the heart of urban growth, and perhaps economic growth. 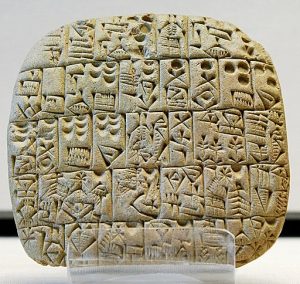 Moreover, this work on Bronze Age trade demonstrated the feasibility of collecting historical data, even very old data, and of analysing this data using modern theories and techniques, even if this required much caution and work!

Your new work aims to test the hypothesis that direct contact between individuals affects their preferences and the technologies they use. How did this idea come about?

Thomas Chaney: Two complementary paths brought me to this idea.
First, my research on Bronze Age trade suggests that direct, interpersonal exchanges played a crucial role in the emergence of urban trade centres.
Second, my research on the impact of immigration on the structure of multinational firms suggests that the presence in a city of descendants of immigrants from a certain country facilitates the flow of information between that city and that country. The natural next step is to test the hypothesis that interactions with ‘neighbours’ from diverse origins change perceptions of foreign cultures. 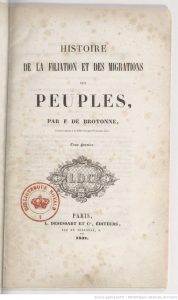 Thomas Chaney: Yes, today we are experiencing growing international migration. It appears that economists reflexively believe that migration generates positive phenomena: it enables better global allocation, and gives more freedom to individuals who can then make the best possible choices for themselves and their neighbours. However, migration is also associated with sometimes violent rejection in host countries. It is therefore important to understand the mechanisms through which immigration affects host countries.
An economist can help address this question by trying to identify and quantify the causal effect of immigration – that is, how immigration helps change host societies, and not the other way around – how these societies affect immigration – that is, how they change their host societies, and quantifying them.
Most of the work on immigration in my project is based on historical migration shocks. These key periods enable the isolation of some of the variations in migratory flows, or more precisely the parts that we can relatively confidently label as quasi-random, i.e. due to chance or accident. Isolating these variations is a crucial step in identifying the causal direction between immigration and growth, and changes in attitudes. The accumulation of historical events enables such progress.

A second topic, which also encompasses migration and multicultural issues, focuses more specifically on the development of cities. How do you intend to approach these issues?

Thomas Chaney: Once again, for an economist, one of the main problems when confronted with empirical data is to identify a causal effect. The emergence and development of cities is a complex issue, because the cities of the distant past affect the cities of yesteryear, which in turn affect the cities of today. I am using two very different historical contexts in this project in the hope of minimising this problem of endogenous city dynamics.
In the first one, I study the very first cities, which emerged during the Neolithic revolution. To extremely simplify, the starting point is a world without any cities – a ‘blank page’ – and the period ends with the emergence of a few cities. In the second, I look at the very particular context of southwestern France in the 13th century, with the creation, ex nihilo, of new cities: the bastides. Unlike the Neolithic period, this is not a ‘blank page’. 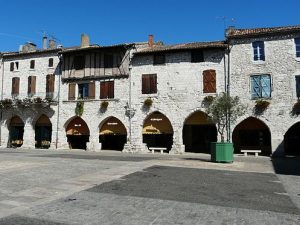 However, here, the decision to create a town is partly arbitrary and attributable to various regional authorities: kings of France and England, churches, counts of Toulouse, and local lords. While their foundation is arbitrary, the evolution of these bastides in the decades and centuries that followed was more organic. This provides a laboratory of sorts to study urban evolution.

You also study technical progress and the diffusion of technologies over very long periods of time.

Thomas Chaney: One of the objectives of this project is to study the drivers of technical progress over the very long run.
To do this, my team and I are systematically gathering and analysing objects housed in art and history museums around the world. These collections include hundreds of millions of objects, skilfully catalogued by curators, covering thousands of years and the entire surface of the globe. Using modern data science, machine learning, and natural language analysis techniques, we can automatically identify the place and date of the emergence of new techniques, and then track their diffusion through space and time.
Of course, curators make fateful choices to acquire a particular work; these choices reflect both the colonial history and associated looting, and the tastes of visitors during a particular era. This is why we must not only diversify our sources, by collecting information from museums on all continents, but also use statistical tools to correct possible biases.
Once these steps have been taken, we will be able to test modern theories of economic growth and the diffusion of technical progress, not just over the past few decades, but over millennia.