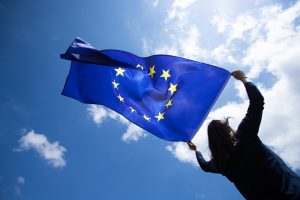 The democratisation of central and eastern Europe was initially celebrated as a historical success story. A European subcontinent moved from communist authoritarian regimes to reasonably functioning democracies based on competitive political systems with the rotation of power. However, by the second decade of the 21st century, the grapes of democracy started to sour. A number of countries, most notably Hungary and Poland, elected leaders and parties who explicitly aim to circumscribe pluralism, undermine independent media, and limit judicial oversight, establishing what the Hungarian Prime Minister, Victor Orbán, calls “illiberal democracy.”

This research, however, overlooks the observation that democratic backsliding tends to take place in societies that are ethnically more homogeneous — where ethnic minorities are either very small or politically not significant. While some countries in central and eastern Europe, such as the Czech Republic, Hungary, and Poland, have few politically organised minorities, other countries in the region, such as Bulgaria, Estonia or Latvia, have important and politically mobilised ethnic groups. Considering the relationship between ethnic heterogeneity and democratic backsliding (figure 1), it is clear that backsliding tends to occur significantly more in homogeneous societies. Why is this the case? 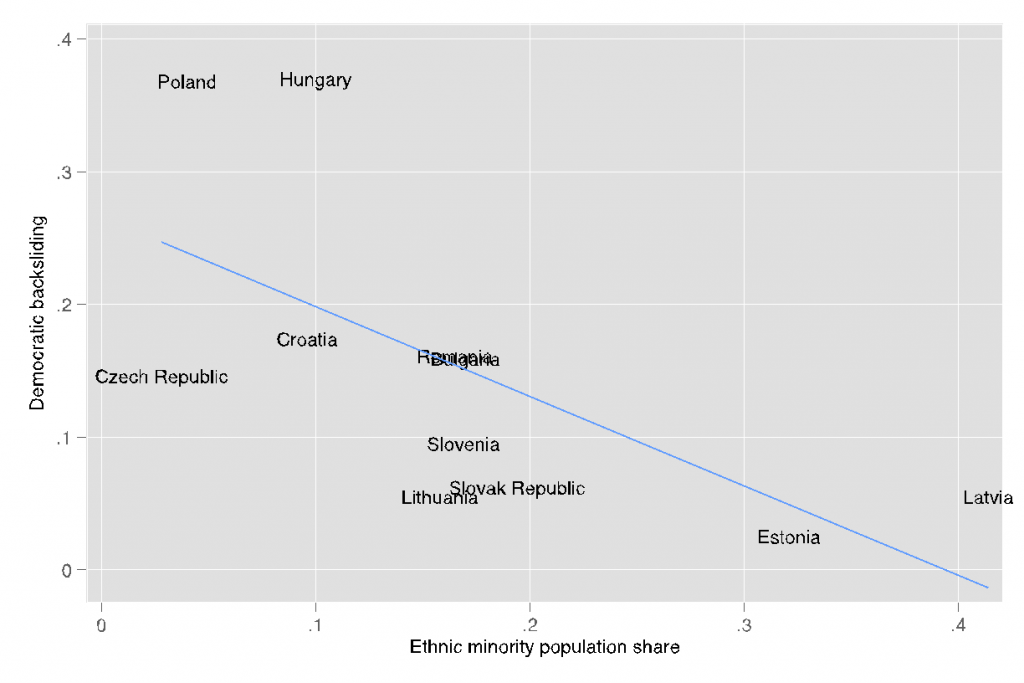 To answer this question, my research focuses on the interplay between ethnic politics and political competition, and highlights the important positive role played by significant, politically organised ethnic minorities. To the extent that ethnic minorities are permanent minorities — that is, to the extent that they are unable to exit their minority status either by creating an independent polity, or by joining their ethnic kin state — they seek to preserve their group identity in a state they cannot control. In short, permanent minorities seek protection from the tyranny of the majority. The most effective group preservation of permanent minorities is the pursuit of liberal political arrangements that would limit the power of the majority, and grant rights and liberties to individuals and minority groups. Politically organised minority groups thus seek to limit the tyranny of the majority through counter-majoritarian institutions, such as legal oversight of the executive, as well as the preservation of legal equality, individual and group rights, and civil liberties. This political effort on the part of minority representatives bolsters liberal politics and reinforces liberal democracy.

The Positive Role of Ethnic Minorities

My focus is, however, on the role of ethnic politics in the context of relatively stable, peaceful and democratic politics. Departing from the central observation that ethnic minorities are keenly concerned about their self-preservation, I argue that certain political contexts lead them to seek liberal remedies to their minority predicament(8)Kymlicka, Will. 1995. Multicultural Citizenship. Oxford University Press.. This ethnic liberalism is conditional, and can be cross-pressured by various factors. When ethnic minorities face deep ethnic animosity and cannot find any partners among the majority; or when ethnic identity is deeply entrenched in religion which is by definition exclusive, particularistic and conservatising(9)Grzymała-Busse, Anna. 2015. Nations under God: How churches use moral authority to influence policy, Princeton University Press; Gerring, John, Michael Hoffman, et Dominic Zarecki. 2016. « The Diverse Effects of Diverstiy on Democracy. » British Journal of Political Science. or when ethnic groups are too small or too weak to mobilise and successfully contest elections, their liberalism fails. Also, when minorities see a path to exiting their minority status, they may prefer the destabilisation of their polity instead(10)Rovny, Jan, « Circumstantial Liberals: Czech Germans in Interwar Czechoslovakia », LIEPP Working Paper, janvier 2020.. 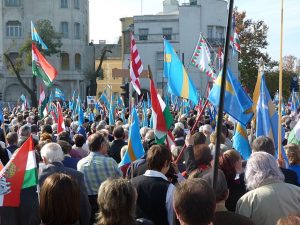 Ethnic representatives tend to be good partners. Previous research shows that they tend to have loyal electorates(13)Birnir, Johanna Kristin. 2007. Ethnicity and electoral politics Cambridge University Press. and also tend to be relatively flexible members of governing coalitions. Their focus on civil rights and liberties is offset by relative flexibility on other issues, such as the economy(14)Aha, Katharine. 2019. « Resilient incumbents: Ethnic minority political parties and voter accountability. » Party Politics; Aha, Katharine. 2019. Interethnic Coalitions in Post-Communist Europe, Manuscrit non publié.. They are thus useful collaborators, supporting governments of diverse moderate parties of both the left and the right. When in government, ethnic representatives ensure the maintenance of basic counter-majoritarian principles that are central to democratic functioning.
The presence of politically organised ethnic minorities thus acts as a bulwark against democratic backsliding. Ethnic minority representatives reinforce liberal democracy due to their inherent interest in protecting their group in the face of the majority. Ethnic politics create a national populist backlash, while simultaneously providing a liberal counterbalance. 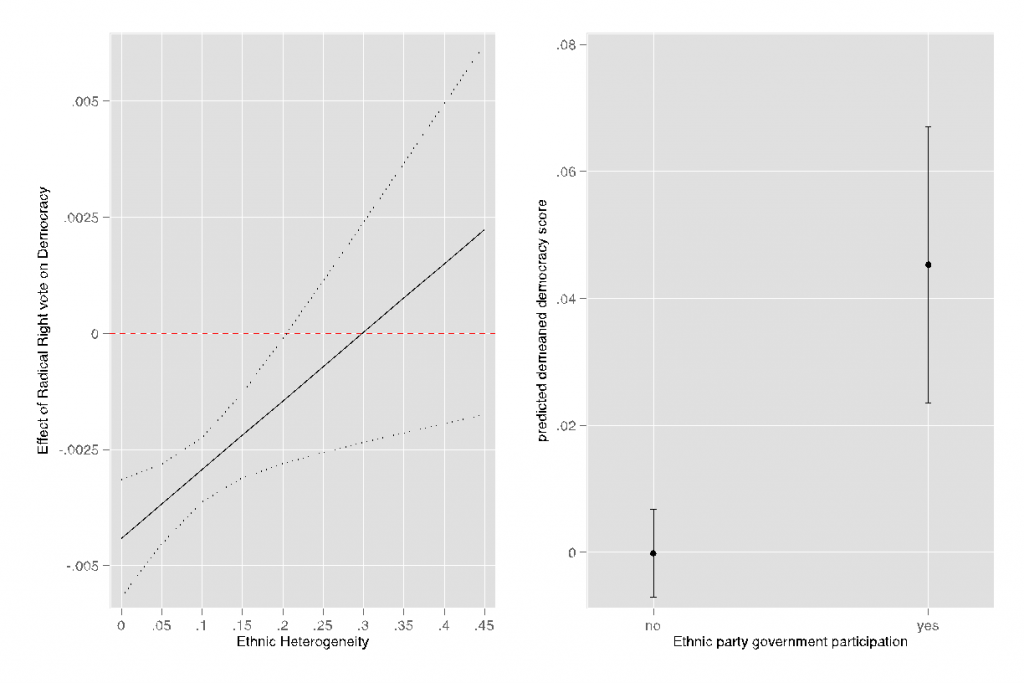 The right panel of figure 2 shows the effect of ethnic minority government participation on democracy, while controlling for GDP per capita, income inequality, unemployment levels, quality of government, and EU membership. It demonstrates that when ethnic minority representatives participate in government, a country’s democracy score (cf. supra) is significantly higher. These dynamics are absent in societies that do not have significant ethnic minorities that can mobilise and influence political competition.

Ethnic politics thus isn’t uniformly harmful. Permanent ethnic minorities have a keen sense of preventing the tyranny of the majority, which is central to democratic functioning. Seeking to limit the majority, ethnic representatives infuse politics with liberal aims. While this emboldens a reaction of the nationalist radical right that is the key driver of democratic decline(15)Palonen, Emilia. 2018. « Performing the nation: the Janus-faced populist foundations of illiberalism in Hungary. » Journal of Contemporary European Studies  ; Plattner, Marc F. 2019. « Illiberal Democracy and the Struggle on the Right. » Journal of Democracy ., it simultaneously engenders a liberal opposition. Ethnically heterogeneous countries see the presence of sometimes virulent radical right, but they maintain a liberal political pole underpinned by structured electoral groups in existential need of equality, civil rights, and liberties. It is for this reason that democratic backsliding is most pronounced in countries with small or political unorganised minorities, like Hungary and Poland, while democracy is more resilient in heterogeneous countries with large and politically organised minorities, such as Estonia or Latvia.