While high finance is increasingly seen as a deeply formal and impersonal universe of calculations and machines, especially since the advent of high-frequency trading, this is not at all the case for entrepreneurial finance. On the contrary, the latter is depicted as a world of relationships between people, whose intuitions and feelings determine decisions. The study of practices in the entrepreneurial world over the past century suggests a more nuanced picture by acknowledging the importance of the written word in relations between entrepreneurs and investors.
Explication by Martin Giraudeau, Assistant professor at the Centre for the Sociology of Organisations. 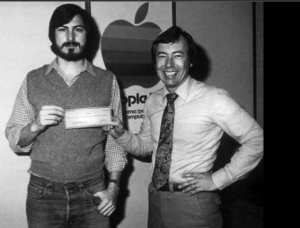 Steve Jobs and Mike Markkula with a cheque symbolising his investment in Apple, 1977. Source : allaboutstevejobs.com

The world of entrepreneurship often highlights the key role of interpersonal relationships, casting business creation as an essentially informal activity. It suggests that uncertainty reigns before a business starts operations, and at the beginning of its existence; few things are set in stone, given the absence of rigorous accounting. From this perspective, most decisions are made orally, in face-to-face interactions, and on the basis of more or less brilliant intuitions rather than on precise data.
This is especially considered to be the case for investment decisions taken by venture capital companies, which finance innovative business projects. The necessarily uncertain nature of the proposed projects is seen as requiring exclusive reliance on whatever tangible elements are available, starting with the entrepreneur, whose seriousness, resolution, competence, experience, as well as creativity, charisma, etc. might be appreciated. Even if the project were to fail, this person could be trusted to bounce back and come up with a new strategy.
This idea is widespread in the entrepreneurial world, but has also been embraced by sociologists and historians. To some extent, this is a welcome development: the historiography of credit relationships since the 19th century has heavily emphasized the rise of formalization and of the attendant impersonality in credit and investment practices, to the point that a correction was needed to show how financial transactions are socially embedded (1)Claire Lemercier et Claire Zalc, Pour une nouvelle approche de la relation de crédit en histoire contemporaine, Annales. Histoire, Sciences Sociales, 67(4), 2012.
The world of entrepreneurship is a perfect gateway for a course correction: it more clearly showcases “the social”, “the human”, and even “the psychological” than the massive and institutionalized consumer credit world, for example. The historian and sociologist of science Steven Shapin, won over by the discourse of entrepreneurs, venture capitalists and other incubator managers, thus argued that in the Silicon Valley world of entrepreneurial finance, almost everything is attributable to the informal and interpersonal relationships between these actors, and that these relationships are cultivated during leisure time at cafés and sports clubs. “Without the advantages of familiarity, the satisfaction of formal criteria means almost nothing”(2)Steven Shapin, The Scientific Life: A Moral History of a Late Modern Vocation, University of Chicago Press, 2008.

A history of entrepreneurial formalities 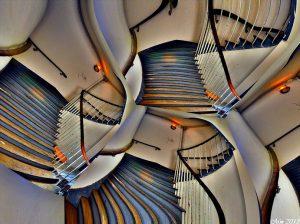 However, this description falls short. First of all, it is important to note that the value that actors in the entrepreneurial world place on informal relations and people often pairs with complaints about some of the required formalities, such as legal formalities imposed by the State and financial formalities. Typically, complaints by entrepreneurs and their financiers focus on the implementation of a business plan, which has been panned as a source of many evils, including the dot-com bubble, for promoting companies that were only real on paper.
The criticism of business plans has been accompanied by a defense of alternative methods, like the “lean start-up”, the promise of which is assessed on the basis of evidence gradually provided as the new company develops(3)Eric Ries, The Lean Startup: How Today’s Entrepreneurs Use Continuous Innovation to Create Radically Successful Businesses, Crown Business, 2011. It should be noted that the proposed solution to excessive formality is not a rejection of all formality: forecasts are simply replaced by actual results.
A study of entrepreneurial practices and their history confirms this. Even at the end of the 18th century, when – so we are told – informality and personalization dominated economic exchanges, a business launch, in the form of a joint stock company for example, involved the drafting and circulation of projects, plans, prospectuses, applications for authorizations, patents, and other privileges (4)Martin Giraudeau, The Predestination of Capital: Projecting the DuPont de Nemours Company into the New World, Critical Historical Studies 6(1), 2019 (5)Martin Giraudeau, Proving Future Profit: Business Plans as Demonstration Devices, Osiris 33(1), 2018.. More recently, the emergence of the current world of entrepreneurship in the decades following World War II came hand in hand with the establishment of many administrative procedures.
The development of entrepreneurial finance, particularly around the venture capital industry, increased demand for projects that had to be carefully studied, evaluated, justified, discussed, compared, corrected, and selected. Investors were also accountable to financial markets and authorities, and therefore had to estimate the value of these projects. At the same time, entrepreneurs were advised, accompanied, guided, encouraged, and trained by accounting, legal, and marketing professionals, and beginning in the 1970s, by specialized institutions like incubators and other accelerators, as well as by experts in the new quasi-discipline of “entrepreneurship” in the academic world. Be it for financial decision-making or pedagogical purposes, the actors embraced a written, handy, recognizable, and standardized format. This is how the business plan became the general mediator of the world of entrepreneurship.t (6)Martin Giraudeau, Remembering the Future: Entrepreneurship Guidebooks in the US, from Meditation to Method (1945-1975), Foucault Studies 13, 2012 (7)Martin Giraudeau, Imagining (the Future) Business: How to Make Firms with Plans? in Paolo Quattrone, Christine McLean, Nigel Thrift & François-Régis Puyou (Eds.), Imagining Organizations. Performative Imagery in Business and Beyond, Routledge, 2011. 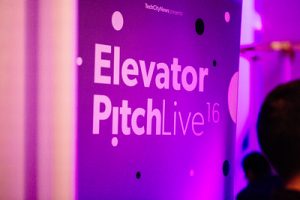 This use of formalities does not necessarily contradict the personalization hypothesis. Formalization and impersonality are too often conflated. The written business plan requirement does not preclude a venture capitalist from first and more carefully reading a plan recommended by a friend. But the intersection of the two goes deeper. Interpersonal relationships themselves are partly formal. Investors also judge entrepreneurs on the basis of their plan’s quality. Their face-to-face exchanges follow scripts: entrepreneurs work on their elevator pitch, technology demo, and business plan presentation. They also calculatedly invest in the development of their personal networks. There is certainly a personal and informal aspect to these exchanges, but it would be analytically and empirically wrong to conflate the two, as it would be to claim that they completely dominate the entrepreneurial world. 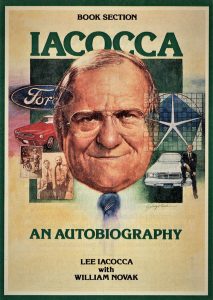 What is most surprising is how thoroughly convinced we are of the informal and interpersonal nature of entrepreneurial activities, even though they have long been squarely based on the written word. The advantage for entrepreneurs and investors is clear: it supports the masculine heroism of their activities and of themselves; they would rather not be seen as bureaucrats. Sociologists’ and historians’ emphasis on informal and personal aspects is more surprising. Several keys to explaining it lie in the intellectual sources of this ideology of entrepreneurship. Of particular note is the influence of economic vitalism on the emergence of a hyper-personalized and informal vision of entrepreneurial activities.
One of the most influential founding fathers of the venture capital industry, Georges F. Doriot, cast the true entrepreneur as a “superior man” capable of “giving life” to new companies based on an intuitive business sense and ability to “feel” the future (8)Martin Giraudeau, Processing the Future: Venture Evaluation at American Research and Development Corporation (1946-1973), in Jens Beckert & Richard Bronk, Uncertain Futures: Imaginaries, Narratives and Calculation in the Economy , Oxford University Press, 2018.. However, Doriot’s vitalism largely drew on the work of his Harvard colleagues during the interwar period, including physiologist and sociologist Lawrence J. Henderson, a theorist of the homeostasis of biological and social systems, and philosopher Alfred North Whitehead , whose procedural theory of knowledge greatly influenced the pedagogy of the university’s new School of Business Administration.
The shared intellectual roots of the actors of the world of entrepreneurship, and of the social science researchers who study them, has long complicated the objective analysis of entrepreneurship.