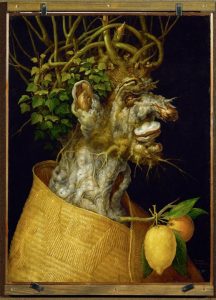 Thomas DaCosta Kaufmann has helped to bring Giuseppe Arcimboldo out of the comfort zone wherein critics had treated him as an ahistorical painter.  Kaufmann has contributed toward a critical revision of Arcimboldo’s oeuvre as a whole by placing it back within the context in which Arcimboldo lived and painted, including his connection with the House of Habsburg in Central Europe.  More generally, the author insists on the allegorical character of Arcimboldo’s paintings, which were accompanied by poems and which referenced the concerns of his patrons, who shared his keen interest in naturalism, botany, rare objects, marvels, and monsters. Despite Arcimboldo’s huge contemporary reputation (he was made a count and numerous copies and imitations were created of his work) his star waned in the eighteenth century.  Interest in his work revived only in the twentieth century, when Arcimboldo was regarded as a forerunner of Fantastic Art, Dada, and Surrealism.  The first monographs on him appeared in the 1950s, and he was picked up by a new wave of interest in Mannerism. However, neither the naturalistic impulse in Arcimboldo’s work nor its historical situation were then recognized.  A similar split between historical approaches and ahistorical interpretations has continued to be expressed in presentations of the past three decades, when among other opinions a post-structural reading of the painter’s “rhetoric” comparing Arcimboldo’s approach to a deconstructive “mise en abyme,” which relates to efforts to establish Milan not just as the source but the actual location where Arcimboldo’s composite paintings were first painted.[ref]Principally Philippe Morel, « Arcimboldo’s Composite Heads, Grotesques and the Aesthetics of Paradox », in Arcimboldo 1526-1593, op. cit., p. 221-231, who praises Roland Barthes ; Arcimboldo, Milan, F. M. Ricci, 1980 ; Sylvia Ferino-Pagden « Arcimboldo and the paradox ‘mise en abyme’», in Arcimboldo. Nature into Art, op. cit., p. 208 ; « Arcimboldo e il paradosso mise en abyme », in Arcimboldo (ex. cat. Rome). [/ref]

The Origins of Arcimboldo’s Composite Heads

While Arcimboldo might have become familiar in Lombardy with several sorts of works that may have inspired his composite pictures, including Leonardo’s work, little evidence exists however to indicate that he executed any composite paintings before he came to the Habsburg Court in Central Europe.  A series of paintings of the four seasons (now in the Bavarian state collections of paintings) that have recently been proposed as done by Arcimboldo before he came to Vienna may rather be imitations of Arcimboldo’s inventions, what one contemporary called mere thefts, semplici ruberie di sue cose.

In stark contrast a mass of information associates the invention and execution of Arcimboldo’s composite heads with the imperial court. The components of Arcimboldo’s paintings of Seasons and Elements were based on nature studies, many of which could not possibly have been done in Italy. They are related to several scores of drawings of animals, birds, flowers, and plants by Arcimboldo that are dated from the 1560s and 1570s, when he was in Central Europe, and no undisputed drawings were done before then. Many are of creatures that could have been rarely seen anywhere in sixteenth-century Europe except at the Habsburg courts (or in Lisbon), but were visible in Vienna and Prague where they had been shipped via Lisbon and Seville to Central Europe. Several contemporary references suggest how Arcimboldo used such sources: for example, Maximilian II provided Arcimboldo with the opportunity to study creatures from life.  All the fruits and flowers in the paintings of Vertumnus and of Flora are said to have been or were demonstrably made according to this process; many studies of flowers and fruits also exist. The authentic series of Seasons and Elements bear many imperial and other sorts of references to their recipients that mark them respectively as belonging to the Habsburgs or in the other series made for other patrons.  These signs reinforce the interpretation that however else the paintings may be viewed, the pictures of seasons and elements were allegories that pertained to the rulers to whom they were given. Their meaning, if not immediately clear, was moreover explicated by poems presented along with the paintings of the seasons and elements when the first versions of the latter were given to Maximilian; likewise, poems on Arcimboldo’s paintings of Vertumnus, embodied by Rudolf II, and of Flora were presented along with these pictures when they were given Rudolf II in the 1590s.  Regardless of whether or not the poems were written before or after the paintings, the message explicated can now be seen as consistent with the visual elements of the paintings, and can now be borne out by the naturalistic elements, especially with the implications of the citrus fruits in the painting of Winter made first for Rudolf’s father Maximilian II; they have been recognized as the fruits of the Hesperides that betoken a golden age that returns with the Habsburgs, which is the message of Arcimboldo’s Vertumnus as well. The naturalistic content of Arcimboldo’s paintings of seasons and elements (and Flora and Vertumnus) would also have found favor at the court.  Ferdinand I (emperor 1558-1564) was keenly interested in the scientific investigation and study of nature, and in gardens and gardening, and collected exotic birds and animals.  He was especially interested in the cultivation of citrus fruits, as suggested by the lemon and orange in Arcimboldo’s Winter.  Maximilian II (1564-1576) shared his father’s interests.  He established menageries, had many gardens laid out, and collected birds and animals.  Maximilian II’s brother, Emperor Ferdinand’s second son Archduke Ferdinand II “of the Tyrol”, had the Prague Belvedere and its gardens completed.  Rudolf II (1576-1612) was described as the greatest lover of plants and flowers in the world; he kept gardens, an aviary, a fish pond, a lion’s den, moats for stags, and other wild animals.  Similar interests were maintained by many scientists at the court, with many of whom Arcimboldo was in contact, and coalesced in the imperial collections, notably the Kunstkammer, for which his pictures have also been described as perfect emblems.

The recently rediscovered diary of a Saxon personal physician of Ferdinand I indicates that natural history and wonders or freaks of nature formed the major topics of conversation at the emperor’s dinner table, and also provides the first written mention of Arcimboldo’s Seasons. The pictures may have stimulated discussion of nature, as well as serving as imperial symbols.

Humor was no doubt an important component of Arcimboldo’s composite paintings.  But what was found extremely humorous in court circles, where telling and taking jokes were regarded as skills of the courtier, was not what present interpreters mean.  Laughing at lower classes and ugly people was regarded as funny; the comic was appropriate for subjects drawn from lower classes.  As Arcimboldo’s paintings suggest, the laughable is a species of the base or ugly. Making caricatures that poke fun at people, and that were called ridiculous, may also have had a further intent.  In Arcimboldo the humorous or comical had a more serious aim, and the ugly and seemingly comical in Arcimboldo’s work does not exclude that his paintings may have something serious underneath.  Arcimboldo’s paintings were serious jokes, an idea widely disseminated and best known from the writings of Erasmus, and presented by François Rabelais explicitly as a model for his own book in the prologue to Gargantua.  Most important, Arcimboldo and the imperial court which he served were closely connected with Erasmian currents.

When the organizer of the recent exhibitions invoked Ernst Gombrich as following a different line of thought to this author’s interpretation of Arcimboldo’s images as a serious joke, Gombrich’s comments were taken out of context and misunderstood.  Gombrich hardly meant to deny the importance idea of serious play, serio-ludere, as it is encapsulated in the idea of the serious joke seen in the paradox of Arcimboldo’s paintings. Gombrich made his comments in a book on Huizinga, the author of Homo Ludens[ref]Johan Huizinga, Homo ludens : essai sur la fonction social du jeu  traduit du Néerlandais par Cécile Seresia, Paris, Gallimard, 1951; id., Homo ludens; a study of the play-element in culture, London, Routledge and K. Paul, 1949.[/ref], and dedicated his paper therein specifically to the author (Rosalie Colie) of an important book where the notion of the serious joke is elucidated as one aspect of the paradox as a cultural expression in sixteenth-century Europe.  Gombrich knowingly both began and ended his essay on Huizinga and play talking about Erasmus, whose ideas in this regard, as remarked, are important for considerations of Arcimboldo[ref]E. H. Gombrich, “Huizinga’s Homo ludens,” in Johan Huizinga 1872–1972, ed. W. R. H. Koops, E. H. Kossmann, and G. van der Plaat G., Dordrecht, Springer, 1973, 133-154; Rosalie Colie, Paradoxa Epidemica, Princeton, NJ, Princeton University Press, 1966.[/ref][4].  Far from denying the relation of the verbal to the visual, as the organizer of the exhibitions who invoked Gombrich incorrectly would have us do, Gombrich also placed his essay on Huizinga in his book of Tributes along with one on Freud, which gets to the psychological heart of this paradox: he titled his Freud essay “verbal wit as a paradigm of art[ref]E. H. Gombrich, “Verbal Wit as a Paradigm of Art: The Aesthetic Theories of Sigmund Freud,” in Tributes: Interpreters of Our Cultural Tradition, Ithaca, NY, 1984, pp. 93– 115.[/ref].”

The present essay on Arcimboldo concluded by referring to Lucien Febvre’s book on Rabelais[ref]Lucien Febvre, Le problème de l’incroyance au XVIe siècle, la religion de Rabelais, Paris, Albin Michel, 1947.[/ref]. Febvre’s argument was directed against anachronism, in favor of creating a sense of what was possible in a time of the past, based on judicious evaluation of sources.  It is no accident that Febvre’s masterpiece has been the target of attacks by those who would instead mix periods indiscriminately and deny the essential Enlightenment argument for historicism, that not everything is possible in all times and places, among them ideas and images.  Mutatis mutandis, it may be said against ahistorical readings that reduce Arcimboldo’s paradoxes to a mise en abyme based more on references to twentieth-century Parisian intellectuals than on sixteenth-century writers, that Arcimboldo’s metamorphoses of nature are not DADA, but full of meaning.

Text written in English by the author

Thomas DaCosta Kaufmann is Frederick Marquand Professor of Art and Archaeology, Princeton University.  The author of over two hundred articles and reviews, thirteen books, and editor or co-editor of four more, his works have been translated into several languages.  He is the recipient of numerous fellowships and awards, including two honorary doctorates, and is a member of many academies.  He is now engaged in writing on the global history of art.