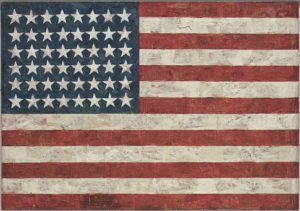 Political symbols are important because they are performative features in political representations and in the constitution of the political imaginary. Surprisingly, they are rarely a subject of investigation in political science. How is political representation possible? What elements does it need in order to become social reality (Berger/Luckmann) and obtain legitimacy? These questions, however, cannot be answered by the means of political science alone, since they are located at the intersection of many disciplines. Fig. 2: Cooking Spatula (Paula Diehl 2014) This object is in my house and gets used for cooking and baking.

When I came to the USA to study the symbolism of US-American politics, the first phenomenon that caught my attention was the massive presence of the US flag and other political symbols in daily life.

From the German perspective, this massive spread of political symbols was a shock–Germany took two generations after WWII to establish a positive relation to the national flag. More disturbing, it was difficult to know if people were expressing their patriotism or simply using fancy objects in everyday life (Fig. 1 and 2).

Using flags for the decoration of garden pottery is quite common, but I never before had seen a Statue of Liberty among them.

I decided to inquire symbol-users in order to understand better their relationship to patriotic objects. I interviewed 120 people taking part in the commemoration of the Declaration of Independence of the United States of America, one of the most patriotic holidays and the most important historic place in US-American history: the commemorations of July 4th at Independence Hall in Philadelphia.

Analyzing the results of my survey, one visible cleavage stood out: one’s age seemed closely linked to one’s attitude towards political symbols. People older than 35 acknowledged having a patriotic ethic as well as a moral relationship to political symbols. People younger than 35 tended to declare that they do not care about symbols. So far, this is not an unexpected result. Yet the surprising outcome of my survey was that both groups possess everyday objects laden with national and political symbols. When asked how they use these objects, both groups declared that they use them as decorations or for fashion purposes. For the older group, objects containing national symbols were particularly important on private occasions such as family meetings, while the younger group affirmed that they use objects containing political symbols but do not pay attention to them. In both cases, political symbols permeate everyday life, thereby blurring the boundaries between political statement, decoration, fashion, and quotidian objects. How is one to make sense of these two different attitudes and, at the same time, the very similar uses of political symbols? When Jasper Johns painted one of his most famous pictures, “The Flag”, in 1954/1955, he did so at the time of the Cold War and McCarthyism. Some observers suspected Johns of propagating anti-American sentiments, but Johns asserted:

“Using the design of the American flag took care of a great deal for me because I didn’t have to design it. So, I went on to similar things like the targets–things the mind already knows. That gave me room to work on other levels.[ref]http://www.jasper-johns.org/flag.jsp[/ref]”

Johns’s approach allows us to distinguish between two levels of perception: the first is the perception of the flag as a political symbol, the second its perception as an object available to everyone in everyday life. Blurring the borders between these two levels means blurring the borders between political meaning and consumption, between collective symbols and individual uses, and between official political purpose and expressions of the self.

Yet this symbolic practice seems politically to be deeply ambivalent: It is a particularly good way to make political principles, patriotic emotions, and political engagement present in everyday life. But if the symbols become overly available to particular uses, they can end up meaning just anything. Once available, symbols escape one’s control and can lose their aura, to use an expression coined by Walter Benjamin. That is the reason why Joseph Goebbels prohibited Nazi symbols in the objects of everyday life. Equally important, political symbols can become subversive and can change their original political meaning when made available for new uses and interpretations.

In the case of democracy however, the general availability of political symbols includes both: trivialization as well as an opening for a more active role on the part of individuals and civil society. Yet, if symbols can become trivialized, they can at the same time keep society connected to the democratic imaginary. For this reason, they perpetuate political meanings, in spite of the intention of their users.

Analyzing the uses of political symbols in everyday life can help us to understand how citizens imagine political order, how they connect to the political collectivity, and, at the same time, how this connection changes and how different visions of political order emerge.  3Such analysis thus opens up new interdisciplinary prospects as well as a new field of studies: practical studies of the political sphere.

BENJAMIN, Walter. The Work of Art in the Age of Mechanical Reproduction. 1936. Trans. J. A. Underwood. London: Penguin Books, 2008.

Paula Diehl works in the interdisciplinary field involving studies of culture, representations, Fascism, and Populism.  She teaches “Theory, History, and Culture of the Political” at Bielefeld University in Germany.  In France, she has been invited to teach at the Maison des Sciences de l’Homme, the École des Hautes Études en Sciences Sociales, and Sciences Po.  In her latest book, Das Symbolische, das Imaginäre und die Demokratie (2015), she develops a new theory of representations while taking a particular interest in the symbolic dimension of politics.