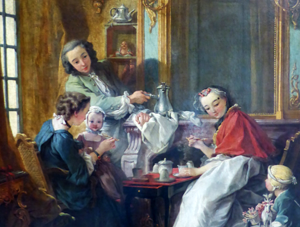 Guillaume Faroult carefully observes the “talkative objects” that appeared at the fringes of eighteenth-century still lifes. At the moment when this quite old genre was receiving its designation in French as nature morte, and despite the French Royal Academy of Painting and Sculpture’s directives, which favored a “good” model for still lifes consisting of “flowers and fruits” even as the era was producing a host of material objects, knickknacks and various ribbons were, in connection with novels and fashionable tales, beginning to upset the game.

History of Knickknacks: Talkative Objects at the Fringes of Eighteenth-Century Still Lifes

In the eighteenth century, the pictorial genre of “still lifes,” which received at that time its designation within specialist French literature, was accorded a definite but moderate amount of dignity in theoretical discourses while enjoying a considerable degree of favor among both art lovers and collectors. The striking success of the painter Jean-Baptiste-Siméon Chardin in this domain rendered more commendable this form of inspiration that hitherto had been relatively discredited within classical discourse. Nonetheless, after the magnificent pioneering expansion of the genre during the previous century, the repertory of subjects and forms seems, in France, rather to have congealed into a certain kind of conventionality, reinforced in part by the categories established within the French Royal Academy of Painting and Sculpture. This observation may seem paradoxical since the Age of Enlightenment had, in another connection, developed a tremendous cultural appetite for the manufacture and consumption of objects, luxury objects in particular. The categories of objects and of discourses could be said to have developed in opposition to each other within the field of French painting during this period. The painting of “things,” inanimate figures, “flowers and fruits,” sanctioned by the Academic doxa, could be said to have been confronted with the new category of “knickknacks [colifichets],” objects of a modern form of luxury, borne along by a “talkative,” disruptive kind of speech connected with new literary categories then on the boom: novels and tales.

According to the belated definition in the Encyclopédie méthodique (1788), the “still life” involved at that time the painting of “immobile and inanimate objects,” or rather painting that took as the “subject of its pictures only animals, fruits, and flowers,” according to the illuminating definition established by the Encyclopédie or Antoine-Joseph Pernety’s Dictionnaire portatif de peinture (1757). Still life painting operated de facto with a very limited repertory of objects stemming from a series of conventions that were established in the previous century. Artists and critics worked to establish a form of doxa for still lifes that “c[ould] be of good taste.”

At the end of the century, the Encyclopédie méthodique of 1788 confirmed in effect that:

taste in the fine arts, & consequently in painting, is a delicate & often very ready feeling, of proprieties, or of conventions. . . . Good taste in the arts can be found in the lower genres, when proprieties are well observed therein. The still life’s representation of a country festival, of a bouquet of flowers, of a basket of fruits can be in good taste.

The same text firmly rejects “[t]hose artists who have employed bizarre supports, mannered compositions loaded with custom-made accessories, extraordinary costumes, [and] have succeeded most often only in making their originals look ridiculous & in showing the joint pretentiousness of Artist and Model.” The Academy-backed battle over taste as regards eighteenth-century still lifes seems in effect to be a battle over ornament that leads to the rejection of the luxurious accessories of modernity. Yet these same accessories were being granted increased attention and accorded unprecedented, dazzling, and caustic glamor in the most modern and disparaged part of the literature of the time, that of tales and novels. As Henri Lafon has established in a key work on the question from 1992, “poetry comes to the novel through things” (Les Décors et les choses dans le roman français du XVIIIe siècle).

As René Demoris has suggested, “what perhaps counts more, in the theory of genres [established by the Academy], is the resurgence of a discreet yet constant theological argument. . . . If nature is admirable, it is on account of being divine.” One understands better then why the texts by Diderot the critic about Chardin’s still lifes are shot through with a transcendental discourse of Christian provenance:

Here you are again, great magician, with your silent arrangements! How eloquently they speak to the artist! . . . If it’s true, as the philosophers claim, that nothing is real save our sensations, that the emptiness of space and the solidity of bodies have virtually nothing to do with our experience, let these philosophers explain to me what difference there is, four feet away from your paintings, between the Creator and yourself.[1]

What Knickknacks Want to Say

Going against this, the semantic order of knickknacks—“trinkets, trifles, and small ornaments of small consequence or in bad taste, as in the case of quaint figurines, small enamel objects, tiny crystal vases, badly executed figures, disgraceful ornaments ” (Dictionnaire de l’Académie française, 1694)—pertains to a disturbing form of enunciation of the Divine Word and of Christian convention, just as they appear in Voltaire’s iconoclastic poem Le Mondain, a great succès de scandale published in 1736:


I love the pleasures of a court;
I love the arts of every sort;
Magnificence, fine buildings, strike me; …
Since there the devil and fruit were found,
Huetius, Calmet, learned and bold,
Inquired where Eden lay of old:
I am not so critically nice,
Paris to me’s a paradise.[2]

Diderot himself implicitly connects the frivolous accessories of François Boucher’s paintings to this profane and disordered category in this critique of the 1765 Salon:

And then there’s such a confusion of objects piled one on top of the other, so poorly disposed, so motley, that we’re dealing not so much with the pictures of a rational being as with the dreams of a madman. . . . There are too many little pinched faces, too much mannerism and affectation for an austere art. He can show me all the clouds he likes, I’ll always see in them the rouge, the beauty spots, the powder puffs, and all the little vials of the make-up table [la toilette]. . . . All these compositions make an unbearable racket on the eyes.[3]

In the course of the years 1735-1750, objects in the range of what are called knickknacks were given a central place and even were granted a right to speak disruptively on their own in a whole series of often eponymous literary publications (tales and novels), such as Louis-Charles Fougeret de Monbron’s Le Canapé couleur de feu (1741), Le Sopha: Conte moral by Claude Prosper Jolyot de Crébillon (“Crébillon fils,” 1742), and Le **** [Bidet]. Histoire bavarde by Antoine Bret (1749). These same objects, which were absent or greatly in the minority in still lifes, and those of Chardin in particular, were, on the other hand, accorded a high value in a very specific set of genre scenes of modern, luxurious life painted by Boucher between the late 1730s and the early 1750s. Thus, for one of them, The Milliner (The Morning) (1746, Stockholm, Nationalmuseum), Count Carl Gustaf Tessin, who commissioned this work, pointed out without equivocation: “I have communicated my ideas to Monsieur Boucher about the positioning of the subjects. . . . For the morning, one will have a woman who has finished with her curler but is still wearing her nightgown and enjoys looking at baubles spread out before her by a fashion saleslady.” In the first of these paintings, The Lunch (1739, Louvre Museum), Boucher conspicuously arranges the full repertory of modern knickknacks adopted in the secular, intentionally libertine literature of the time, which belongs within the contestatory vein initiated by Voltaire, particularly in his Défense du Mondain ou l’apologie du luxe (Defense of the Worldling or an Apology for Luxury) from 1737. A passage from the libertine novel by Jacques Rochette de La Morlière, Angola (1746), describes the same objects: “console tables and jasper-lined alcoves, Chinese cabinets loaded with the rarest porcelains, the fireplace furnished with big-bellied magot figurines of the newest and most farcical kind, cut-out screens.”

On Boucher’s canvases, there is the same abundance of ribbons and various other accessories for seduction as are highlighted in the libertine narratives of Crébillon and La Morlière. In the Stockholm Milliner, Boucher saturates his composition with such ornament, whose quality and efficacity both saleslady and elegant client assess at the very moment of the lady’s morning grooming [toilette]. On several of these canvases, Boucher glorifies the furniture set called toilette at the time, which includes a table sumptuously covered with precious fabric and a set of silver items (mirror and boxes) that allow him to stage the making-up, the hairdressing, and the grooming of elegant Parisian women. In an anonymous, satirical theater piece, Les Colifichets (1751), one waxes ironic about the social and intellectual prestige the grooming ceremony confers: “There, an ignorant tab collar, whose genius would have remained fallow . . . , becomes through your pretentious decoration an oversophisticated man, a likeable priest. Two or three toilette sessions, five or six readings of Novels . . . set him up to sparkle all over with elegance.” A later Tale by Claude-Joseph Dorat, Le Bureau et la toilette (1773), grants speech to two pieces of furniture in order to deliver the final verdict: “A single witness is worth more than one hundred gazettes./Gods! Make toilettes speak! . . . /And we will know the secrets of states.” A picture by Boucher, Brown Odalisque (174[5 ?], Louvre Museum), pushes further, it seems, this confusion of man and object, doing so no doubt in resonance with one of the most diabolical texts by Crébillon fils, Le Sopha: Conte moral (The sofa: a tale of morality, 1742), which earned its author a period in exile and a pause in his literary career.

By Way of a Conclusion

The mid-eighteenth century witnessed the publication of some of the most audacious texts of a confident materialism, which rejected the preestablished divine order and wherein men and objects seem to merge. Thus do we have Jean Galli de Bibiena’s La Poupée (The doll, 1747), in which the eponymous puppet speaks uninhibitedly so as to say the opposite of what the existing social order stands for and to tell the truth about it. Still further, Julien Offray de La Mettrie’s Man a Machine (1747) dared above all to set forth a different order, one in which man’s presence dissolves into life as a whole, the audacity of its materialism arousing the wrath of the dévot party. In exactly the same way, we believe, the omnipresence of knickknacks within mid-century tales and novels, just like in Boucher’s sophisticated genre scenes, may be said to illustrate the dazzling plasticity of human creativity while exposing, in the breach, the absence of God.

[3]Diderot on Art, p. 23. [Translator: I have translated the last line from the French, as it does not appear in the extant English translation.]