Youth in France: “a rejected citizenship” 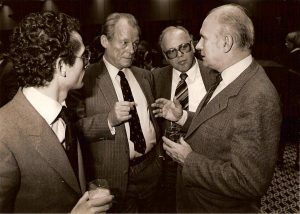 H istorians consider the 1970s to be a key turning point in European and international politics. After observing that this era’s major transformations, especially the decline of economic interventionism and the metamorphosis of transatlantic relationships, had major effects on social democracy in Europe, Michele Di Donato – a researcher at Sciences Po’s Center for History – started conducting research* to uncover their paths, processes and effects.

Social Democrats, who were politically ascendant in Europe at the time, were particularly affected by these changes, which forced them to rethink their approaches to society and their programs. They notably had to reconsider the “Keynesian compromises” established in the aftermath of the war.

In order to better understand these transformations, Michele Di Donato will study three of their dimensions:

Another way of approaching the history of the left

Through the adoption of a transnational perspective, the history of the European left will no longer be addressed in a “self-referential” framework but rather examined as a part of a much larger picture wherein socialist parties are considered to simultaneously be the actors, interpreters and subjects of transformations changing Europe’s sociopolitical landscape.
In order to carry out this project, Michele Di Donato will explore archives located in five European countries as well as the United States.

*This research project (EUROSOCIAL) is funded by the European Union as part of the Marie-Curie program, a component of the European program for research and innovation (Horizon 2020), wherein a main focus area is “Europe in a changing world”.