Passing Laws: When the End Justifies (or not) the Means

Race and Racism in the Concert of Nations 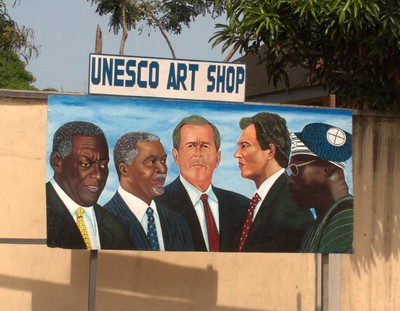 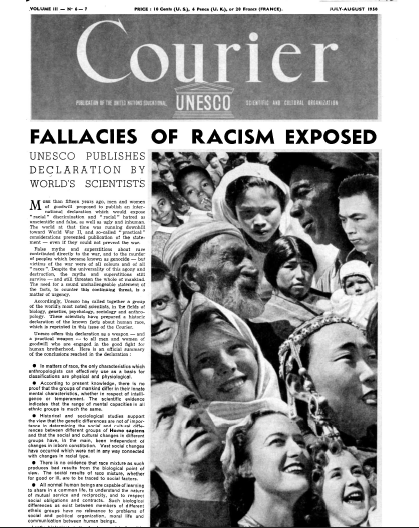 Since their very creation, international organisations (IO) have made the fight against racism one of their key objectives. However, despite their proactive discourse, IOs have faced recurrent dilemmas on this issue, the first of which is the ambivalent and profoundly contested nature of the notion of race itself. Indeed, how can we fight against racial discrimination while avoiding the reproduction of essentialized conceptions of race? Many international organisations have adopted a pragmatic approach and refused to engage in theoretical debates on the definitions of “race”, limiting themselves to observing the real effects of this concept on the social world. This special issue on “Coming to terms with ace in International Organisations (1945-2019)” (Critique Internationale n°86) seeks to expose the whys and wherefores of this path. Interview with Juliette Galonnier, Assistant Professor at Sciences Po’s Centre for International Studies and Patrick Simon, Director of Research at INED who coedited the issue.

In the wake of the second world war, there was a fundamental need in the international community to condemn racism, which had reached a genocidal dimension. This is apparent in the 1945 Constitution of UNESCO and the 1948 Universal Declaration of Human Rights. Yet, while both these texts mention racial persecution and discrimination, the notion of race itself is never explicitly questioned. How can we explain such ambiguity between clear denunciation and tentative language?

At the time, although there was an opposition to the principle of racism, many European countries were colonial powers that extensively relied on racial policies in the territories under their control, and racial segregation was the norm in the United States. Condemnation of racial persecution was essentially limited to the genocide of European Jews. Moreover, a substantial revision of the concept of race had not yet occurred and it was still used as such in scientific research, particularly in physical anthropology, human biology, and human geography. The dominant idea was that racist doctrine and the idea of a hierarchy of races, rather than the notion of race itself, were responsible for persecution and discrimination. The radical de-racialisation of the way populations are classified and represented was not yet on the agenda. The scientific consensus on the inanity of the concept of race would take time to develop. This is visible in the virulent debates that surrounded the UNESCO’s four “Declarations on Race” (1950, 1951, 1964, 1967) and the significant indecision that has characterised that organisation’s successive programs on race(1)Élisabeth Cunin – Is UNESCO at the origin of anti-racism? Historical ethnography of programs on race (1946-1952), Critique internationale, vol. 86, no. 1, 2020, pp. 25-43.. These ambivalences, which are both scientific and diplomatic, run through the founding texts voted by the international community between the 1940s and 1960s, and are reflected in the convoluted expressions they used. 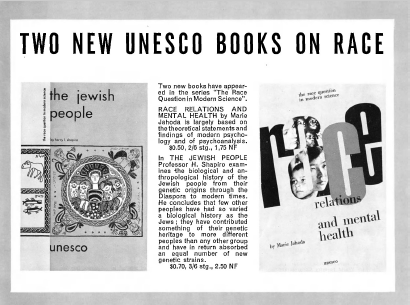 The recommendations of international organisations in the fight against racism give rise to varied reactions among states, which reveal an opposition between countries that are “race blind” and those that are “race conscious.” Which are these countries, and how can we explain the differences in the way they relate to racial references? 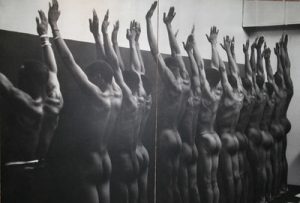 The way states react to the antiracist action of international organisations are determined by a number of factors. Firstly, there were many who decided to support this action because they were convinced that “racism is what other people do” or that it was exclusive to apartheid in South Africa. They did not necessarily envisage having to themselves submit to a critical examination of their internal politics. Secondly, the fight against racial discrimination was also instrumentalised in diplomatic power relations, as became evident during the Cold War. More deeply, there is an opposition between countries that are race blind, where references to race disappear in political discourse, and those that are race conscious, where race is a category that is used to describe the social world and design policy. In the first category, usually in continental Europe, states refuse to use ethno-racial categories in their public policies, arguing that the use of such categories in itself would constitute a form of racism.
France, of course, falls into this category with its promotion of abstract universalism and the parliamentary initiative that the term “race” be removed from the Constitution. The same position can be observed in countries outside Europe, although for different reasons. Venezuela, for example, long invoked the “mixed” and “mestizo” nature of its population to explain its refusal to differentiate its citizens along ethnic or racial lines. Some African countries are also concerned about the possible impact of policies based on different ethnic groups, seeing it as a potential threat to their fragile national unity.
Race conscious countries, on the other hand, argue that it is necessary to make race visible in order to fight racial discrimination. The differences in how racial issues are framed can largely be explained by the history of political ideas specific to each country, as well as the configuration of actors involved in the fight against racism. Finally, it is important to note that an evolution of positions can be seen in numerous countries. This is the case of Portugal, for example, which, following UN recommendations, formed an expert committee in 2017 to examine the possibility of including a question on ethno-racial belonging in its 2021 census. In spite of the positive ruling of the committee, the government ultimately chose not to take this path, mentioning the “extreme complexity and sensitivity” of the subject for the census. But it did commit to conducting a social survey of the ethnic diversity of the country.

In fact, the question that is raised is how to ignore, or even refute the notion of race, whilst using it to fight against its very real effects on the social world. What are the strategies of international organisations in response to this dilemma? 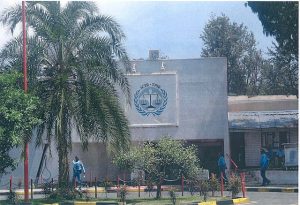 International organisations do not necessarily have a uniform response on this point. In this special issue, we look at organisations of the UN system (UNESCO; the International Bioethics Committee, IBC; the Committee on the Elimination of Racial Discrimination, CERD); but we are also interested in other instances such as the International labour organisation (ILO); and supranational legal institutions (the European Court of human rights, international criminal courts). Their objectives and jurisdictions are different, which engenders specific attitudes towards the question of race and racism. What we are looking at here, are the debates and compromises inherent in implementing texts that encourage the fight against racism without specifically defining the nature of racial characteristics. By cultivating this lack of conceptual clarity, the texts leave it to the actors working in the different treaty bodies, committees, and courts (judges, diplomats, researchers), to resolve the ensuing dilemmas. The case of the International Criminal Tribunal for Rwanda (ICTR) is particularly striking. Should Tutsis be recognised as a racial group or not? Such a recognition would essentially validate the regime’s racist propaganda against them, but not doing it would prevent any condemnation for genocide.
The articles brought together in this issue seek to demonstrate how a number of international organisations formalise race to take into account its real effects on the social world.
Several of these organisations have been through what we called a pragmatic turn. While UNESCO undertook to disqualify the scientific justifications of racism in the 1950s and 1960s, by arguing for the abandonment of references to race, the creation of bodies responsible for fighting against racism and discrimination has changed perspectives. Forced to objectivate the manifestations of racism and their consequences in the member states, these organisations have adopted a strategy of shedding light on the inequalities experienced by people or groups due to their ascribed ethnic and/or racial characteristics. In so doing, they consider that race is not a biological reality, but a social construction based on stereotypes and prejudice. On the other hand, they also consider that it has decisive consequences on the social and living conditions of individuals who are categorised under its logic. 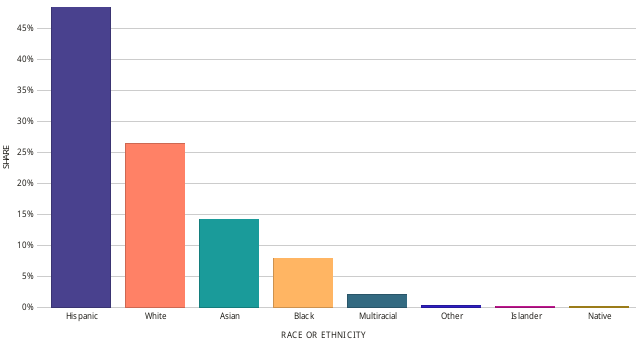 The pragmatic approach is incarnated by the Committee on the Elimination of Racial Discrimination (CERD) which asks states to include,  in their reports, demographic data that is disaggregated by ethnic or racial categories, or if that is not possible, to provide equivalent information (migratory background, language). What is at stake here is the power to measure the progress that has been made in the fight against racial inequalities by collecting concrete data on the subject, even if it relies on imperfect categories. Elements of this strategy can be seen in the ILO as well, which has adopted a “pragmatic essentialism” (4)Juliette Galonnier, Patrick Simon – The committee on the elimination of racial discrimination and the request for demographic data (1970-2018), Critique internationale, vol. 86, no. 1, 2020, pp. 67-90.regarding the category “indigenous” which is redefined according to bureaucratic and institutional imperatives in the fight against discrimination, and not in reference to some anthropological reality. This pragmatic approach, which sets theoretical and normative debates on race aside to focus on principles of action, can be seen in several international institutions(5)Juan Martín-Sánchez, Laura Giraudo – From the “Indian race” to practical essentialism: The convergence of the Inter-American Indian Institute with the International Labor Organization (1940-1957), Critique internationale, vol. 86, no. 1, 2020, pp. 45-65..

The contributions brought together in this issue cover a period of more than 60 years. They all reveal the impossibility for international institutions to impose an improbable nomenclature of race. Are we observing a new evolution of “racial realism” that they have managed to implement and gain acceptance for?

In the current period, the strategy of racial realism is reinforced and legitimated by the “rise of indicators” that affect all areas of human rights protection. There is an increasing urge to measure and quantify inequalities by collecting the most detailed data possible, and to disaggregate it according to a number of categories: age, gender, education level, income level, disability, and… race/ethnicity. This “data revolution” has therefore generalised the use of quantification associated with ethnic categories. The imperative for data collection on the subject is contained within an increasing number of recommendations from international organizations (UN, EU, regional agencies). Once again, this is a pragmatic position. It does not mean taking a stance within a theoretical debate on race or on the relevance of these ethno/racial categories, but rather recognising and measuring their real effects on the social world, with a view to achieving results.