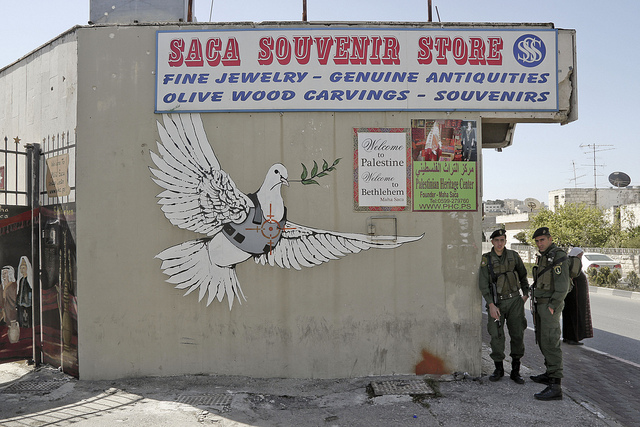 How has Israel’s peace camp evolved? What is the Israeli population’s mindset with regard to the Israeli-Palestinian conflict? In his latest book, Israël et ses colombes. Enquête sur le camp de la paix (Israel and its doves. A study of the peace camp) CERI emeritus researcher Samy Cohen provides answers to these questions by tracing the history of Israeli citizen engagement for peace. Interview. It struck me that Israeli citizen mobilization for peace appeared to be in considerable retreat. Indeed, the Sabra and Shatila massacre in September 1982 – which killed around 800 people – was immediately followed by a protest demonstration in Israel bringing together 400,000 people. A quarter century later, Tzahal’s Operation “Cast Lead” in the Gaza Strip claimed 750 civilian lives but did not trigger strong reactions in Israeli society. To understand this phenomenon I delved into the evolution of pacifist movements from their origins to today. What I discovered, among other things, is that these movements have not disappeared but have radically changed.

What are the origins of pacifist movements in Israel?

While some existed beforehand, it is beginning in 1967 that the movements really emerged, with the occupation of territories in the aftermath of Israel’s victory in the Six Day War. The first peace activists challenged those who interpreted this victory as a “divine” sign that Israel should seize the opportunity to return to its ancestral land. Rather, they believed the occupied territories should simply serve as a bargaining chip in a peace agreement. The pacifists included important political and military officials. One of them – Aryeh Lova Eliav, a former Deputy Minister of Trade and Industry – went into refugee camps and in a report concluded that a Palestinian nation was forming and that Israel should support the emergence of a Palestinian State. David Kimche, deputy director of the Mossad, endorsed this view in a secret note. In reality, they were not alone, as the idea caught on in labor groups, universities, cultural communities, etc.

After the Yom Kippur War (1973), a group of leftwing students against settlements formed. Many members had lived through the war. Shortly after, the peace proposal made by Egyptian president Anwar el-Sadat strengthened this movement. In 1978, 378 officers sent an open letter to the new prime minister Menachem Begin stating that it would be difficult for them “to accept a government that prefers the existence of the State of Israel within the borders of ‘Greater Israel’ to its existence in peace with good neighborliness”. On the eve of the meeting between Begin and Sadat in Washington to sign the Camp David Accords, they called for demonstrations. To their surprise, 100,000 people turned out, and “Peace Now” was born.

Did the movement continue to experience success?

Yes, in 1982 the movement sprung back into action after Ariel Sharon launched the Lebanon War. The official pretext was to fight Palestinian terrorism, but the real reason was to destroy Palestinian infrastructure in Lebanon and prevent Palestinians from claiming a state in the West Bank. In Israel, 400,000 people took to the streets after the massacres perpetrated by Phalange militiamen in the Sabra and Shatila camps, on the grounds that Israeli forces did nothing to prevent them from entering the camps. This was also a turning point, as a real desire for change and peace emerged in Israeli society. Organizations like “Mothers Against Silence” and “There is a Limit” were founded. The First Intifada (1987-1993) then led to the creation of the first human rights organizations. As time went by and the Israeli-Palestinian conflict became entrenched, an increasing number of people started to mobilize against this climate of hatred and fear, and to seek peace.

Yet the “Peace Now” movement then declined

Yes, its decline is usually tied to the extreme violence of the Second Intifada (2000). But the decline actually started in 1983. After obtaining results in the aftermath of the Lebanon War – establishment of a commission of inquiry and the resignation of Ariel Sharon – the movement started focusing on settlements and the Palestinian cause. The latter was very unpopular. Palestinians were deemed a security threat and the vast majority of Israelis, including leaders of the Labor Party, remained convinced that they would never recognize the State of Israel, which therefore had no choice but to ensure its survival by the sword.

You also talk about the feeling of fear, and about Israelis’ growing distrust of Palestinians…

The peace camp’s decline has often been attributed to sociological factors: the massive influx of Russian Jews, the increase in religiosity, etc. However, the main reasons are psychological. They mostly have to do with fear and suspicion of Palestinians. Understanding these feeling requires going back to the Oslo process (1993), which gave rise to great hope. Over half of Israelis supported Rabin despite the attacks perpetrated by Hamas and Islamic Jihad. But an even greater majority did not believe that Palestinians would cease seeking to destroy the State of Israel if they had the means to do so. This view deeply shapes Israelis’ attitude towards conflict.

The idea of exchanging territory for peace obviously failed…

The peace camp’s guiding beacon is that security can only be achieved through peace, and that territories need to be returned in order to make peace. Meanwhile, the right argues that each of Israel’s withdrawals has caused greater insecurity in light of several facts: after the first withdrawal from the West Bank (1994), Hamas and Islamic Jihad carried out very deadly attacks in the heart of Israeli cities, and the situation did not improve after the withdrawal of Israeli forces from southern Lebanon, or after Tzahal’s    withdrawal from the Gaza Strip. In sum, according to the right’s narrative, the left is “irresponsible” and “lies” in insisting that withdrawals can bring peace. The argument that withdrawal begot insecurity remains to be demonstrated. Moreover, none of these withdrawals were made as part of a peace agreement. Peace has never really been tested.

Has Israeli society veered to the right?

The notion of a shift to the right must be put into perspective. It all depends on what exactly is being discussed: the electoral dimension? Party self-identification? Ideological affinities? With regard to voting, it would be more accurate to say that the parties of the left have become “less leftwing”: between 1995 and 2009, the Labor Party and Meretz lost 20 points in the polls, to the benefit of centrist parties rather than of the right (Likud), which only gained 3 points during this same period. Furthermore, only a third of Israelis identify as rightwing, versus 8 to 12% leftwing, and 55% centrist – a large swath that can go either way.
While many Israelis no longer believe in the left’s promises, they still embrace the idea of a Palestinian state next to Israel. This two-state solution, which was unthinkable two decades ago, comes from Rabin, Peres and the peace camp. In addition, some former Likud hawks, such as Ehud Olmert and Tzipi Livni, have adopted the language of the left. In May 2003 Sharon himself claimed, in front of baffled MPs from his party, that Israel could not continue to “occupy” the land of another people, using an expression that belongs to the vocabulary of the peace camp as opposed to the right.
By contrast, a rightwing turn is apparent in the ideological realm since the values of the right – security and settlements – have become predominant. 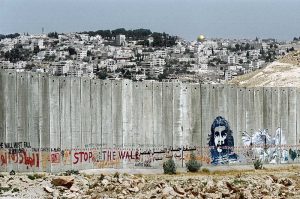 Does a peace camp still exist?

Yes, today there are over a hundred NGOs fighting for peace and human rights, forming a real community that can be divided into four groups.
The first one includes top-down peace building organizations seeking a political solution to the conflict. An example is the Geneva Initiative, which produced a detailed peace plan in 2003 based on important work conducted with Palestinians. I also think this category covers organizations like the Peace and Security Association and Commanders for Israel’s Security, which are movements of senior army and police officials calling for change to the status quo. Peace Now partly belongs to this group because it considers political solutions. But it also works in more concrete ways, notably by monitoring settlements and organizing visits to the West Bank so that Israelis can see the reality on the ground.
A second group brings together grassroots peace organizations that work with Palestinian pacifists. In of itself, this type of cooperation is a success story. The two flagship associations are the Parents Circle Families Forum for bereaved families and the Combatants for Peace. The former was created by a religious rightwing family man, whose son was killed in combat, and who does not want to see any more soldiers lose their lives in a conflict he deems absurd. The second association, Combatants for Peace, involves young Israeli reservists who convinced former members of the Tanzim (one of Fatah’s armed factions) to create a pacifist organization together.
By communicating with the other side about what hurts, these organizations take a transgressive approach. Palestinians talk to Israelis about the war of 1948 and refugees, and Israelis take Palestinians to Shoah memorials. The Combatants for Peace organize a joint commemoration of lost ones. The number of participants has grown from just a few hundred at first, to over 4,000 today.

What about the other groups?

The third one consists of human rights NGOs. These bring together lawyers, doctors, rabbis, etc. assisting Palestinians whose human rights have been violated, especially by representing them in Israeli courts. This group is most frown upon in Israel. It is criticized for giving Israel a bad image, which even the most moderate Israelis, including pacifists, do not support.
Finally, the fourth one is a hodgepodge: writers, artists, musicians, academics, journalists, and ordinary citizens committed to improving the day-to-day lives of Palestinians. Some drive Palestinians who are eligible for treatment in Israeli hospitals but do not know how to get from a checkpoint to a hospital. 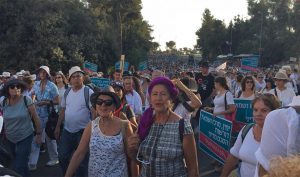 These movements are divided, as each one seeks to set itself apart. These divisions can also be attributed to ideological factors. While they all share the goal of achieving peace, each one has a different approach. Some believe it is best not to broach issues that are too sensitive, such as the war of 1948; conversely, others believe it is essential. Some intend to be apolitical, taking care not to be branded leftwing; others are not shy about targeting the government, which they hold responsible for maintaining the status quo.

Despite its transformations, does the peace camp remain unsettling?

Yes, it is, both in Israel and abroad. On the one hand, some do not like the human and positive face it gives Israel because they would like to continue depicting it as a tireless warmonger. On the other, some are used to considering Palestinians as eternal enemies and are uncomfortable with evidence that pacifist Palestinians exist. The peace camp belies these one-sided representations. It shows the complexity of the conflict and disallows Manicheism.