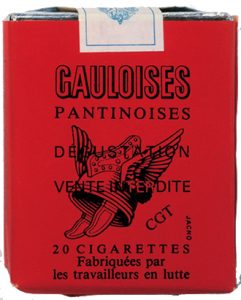 Camille Richert is preparing a dissertation around the notion of labor in Contemporary Art. Starting from the principle that our age has been altered by some major technological changes, she takes an interest in artists who are sensitive to the tools, materials, and products of the new forms of work—to things but also to their active relationships with “human agents.” While it is hardly easy to find a common denominator among the works produced during this unfinished era of contemporary art, one of its distinctive characteristics could be said to be its tendency to benefit from major technological changes and from innovations in the research and development of low-cost synthetic materials.[ref]Federica Martini, “Art History Cold Cases: Artists’ Labour in the Factory,” Artnodes, June 24, 2017, doi:10.7238/a.v0i19.3099.[/ref] This is so much the case that one can formulate the hypothesis that the history of technology, industrialization, and computerization of labor-related tasks, and, more broadly, the history of labor constitute the backbone of this period in the history of art. Thus, from matter to dematerialization and from heavy industry to Bitcoin mining, everything is but a question of one’s relation to things. Beyond the purpose for which they are handled, these work-related things—tools, materials, finished products—take on above all a social utility, as is shown in the works presented below: they are the prop for, as much as the peril of, social integration and social identity. This chronological and thematic journey across a selection of contemporary works will show along the way the changes in one’s relation to work-related things, from the mediating roles they can play up to and including their conflictual symbolics with respect to human agents.

The Social Transitivity of Things

When mobilizing in their work efforts objects from the world of labor, numerous contemporary artists have brought to light a fundamental role played by labor: the elaboration of social ties. Thus it was with Tomislav Gotovac and Mierle Laderman Ukeles, who are practiced in the care of things: while the former did a performance involving a Cleaning of Public Spaces (1981), which resulted in a readymade composed of rubbish (fig. 1), the latter undertook to care for a museum and its works via the performance I Make Maintenance Art One Hour Every Day (1969-1980) (fig. 2). These two approaches rest on a valuing of things that is as much political as it is social. Gotovac brings to visibility the waste products of society left behind in the public space that come to affect this space designed for meetings as well as for the creation and maintenance of social ties; under the pretext of caring for a museum’s “artistic things,” Ukeles includes, within the public space of the museum, female domestic labor, which is usually confined to the private sphere. She makes palpable the invisible, gendered labor of care for things,[ref]Howard S. Becker has described the importance of the cooperative networks that allow a work of art to exist, from the physical production of the work up to and including its conservation over time.  See  Howard Saul Becker, Art Worlds, 25th anniversary ed., updated and expanded (Berkeley, CA and London: University of California Press, 2008).[/ref] which is necessary to the “maintenance” of society, as well as the exclusion of domestic tasks from the spectrum of what is recognized as pertaining to a profession.

These approaches involving the insertion of artists into the service area are full of examples that include transitive social objects. One can also take as an example Christine Hill, who created in 1997 her Volksboutique Franchise in the working-class Berlin neighborhood of Mitte (fig. 3). The project consists in the sale, by the artist herself, of low-cost, second-hand objects. The highly diverse objects of this Volksboutique are, for the artist, a pretext for working her way into the social fabric and for exploring its contemporary economic realities. Hill’s boutique truly is a boutique, with its real merchandise, and the artist genuinely lends herself to participating in the sales profession. In this work, things circulate, but they are not desirable in themselves: they are so for the social relations they may allow to arise; they are so many supports for a relational aesthetic that was at its height in the 1980s and 1990s.[ref]Nicolas Bourriaud, Relational Aesthetics (1998), trans. Simon Pleasance & Fronza Woods with the participation of Mathieu Copeland (Dijon: Les Presses du réel, 2002).[/ref]For, “as well as individuals, there are factors which are integrating elements in society,” as Émile Durkheim said.[ref]Emile Durkheim, The Rules of Sociological Method (1895), ed. with an Intro. by Steven Lukes, trans. W. D. Halls (New York: The Free Press, 1982), p. 46, n. 2.[/ref]

These things prove to be so integrative that they can sometimes take over from and continue [prendre le relais de] social struggles and end up being endowed with an agency of their own. Jean-Luc Moulène’s Objets de grève (Strike objects) is one illuminating example thereof (fig. 4). From 1998 to 2003, he took an interest in a little-known side of working-class culture, exemplified by Carnaud Metalbox solidarity perfume bottles, [self-managed] Lip Factory watches, and Gauloises cigarette packs, dubbed “Pantinoises,” which workers made for themselves on company time [firent l’objet d’un travail en perruque],[ref]Usage of production materials or tools, outside of orders foreseen by the company’s management, for personal ends or, in this case, for purposes of resistance and protest against labor conditions within the factory.[/ref] were collected by the artist after he launched an appeal for such objects in the press. In all, there were forty objects that became archival objects[ref]See the Jean-Luc Moulène collection and the online research tool on the Centre des archives du monde du travail (Center for the Archives of the World of Work) website: http://www.archivesnationales.culture.gouv.fr/camt/.[/ref] as well as works of art.[ref]See the works Seize objets de grève (AM 2003-345) and Vingt-quatre objets de grève (AM 2000-32), which are preserved in the collections of the French National Museum of Modern Art: http://www.centrepompidou.fr/cpv/resource/c6bX65e/reAkde.[/ref] They allowed people to finance the strike through their sale outside commercial business channels, to demonstrate know-how and creativity at work, despite the struggle against the reigning conditions of employment, and finally, to bring news of the strike beyond the walls of the plant through the circulation of such objects: in short, these objects became “actants.”[ref]See the definition of actants offered by Bruno Latour in Changer de société. Refaire de la Sociologie (Paris: La Découverte, 2006).[/ref] These work-related things therefore constituted the auxilliaries for human agents while taking on a key role in social struggles conducted by “life-forms.”[ref]The term “life-form” is taken from Eduardo Kohn, for whom “selves”—that is to say, agents endowed with semiosis (understood as “this living sign process through which one thought gives rise to another, which in turn gives rise to another, and so on, into the potential future,” p. 33)—can only be life-forms.  According to Kohn, and contrary to Latour’s theory of actants, things come out from the perimeter of agency.  I am therefore proposing to bypass this theoretical disagreement by purposely describing things as “relays of agency.”  See Eduardo Kohn, How Forests Think: Toward an Anthropology Beyond the Human (Berkeley: University of California Press, 2013).[/ref]

And when protest fails, these work-related things come to perpetuate the memory of love for one’s craft. Such is the case for Christian Boltanski in his Lost Workers: The Work People of Halifax 1877-1982. This installation made up of thirty boxes in the name of former workers at Crossley Carpets in Halifax, England resulted from the artist’s proposal that workers place therein some effects from their past life of labor. Valerie Mainz and Griselda Pollock described them as follows: “Each box rightly bears the traces of individual lives shaped and emptied around the complex polarities of work and home within advanced capitalist societies and its erosion by the decline of manufacture [ . . . ]. [W]e can still admit the social democrat’s view that work lent a certain dignity to every individual. As a means of finding a place within a social space, it offers a paradoxical structure for borrowing an identity from even what William Morris named useless toil.”[ref]Valerie Mainz et Griselda Pollock, eds, Work and the Image. 2. Work in Modern Times (Aldershot: Ashgate, 2000), p. 4.[/ref]

Initiating their reflections on the more general question of the representation of unemployment in art, Mainz and Pollock state: “Without its function as a social passport, the unemployed suffer the anguish of social invisibility.”[ref]Ibid., p. 2.[/ref]

As early as the year 2000, Mainz and Pollock pointed out two major sets of themes that run through representations of labor: the idea of labor as bearer of social identity and of labor as conveyor of social recognition. They did not yet know at that time that those themes were going to be able to apply to jobs in the field of digital technology. This is precisely what Andrew Norman Wilson shows in Workers Leaving the Googleplex, from 2011. He filmed a separate category of Google workers both male and female, identifiable on account of a colored badge, who have been assigned to digitalize books over staggered working hours. These employees are thereby unable to frequent the rest of the company’s personnel and are penned in in such a way as to render them invisible. Wilson underscores both the discipline of bodies and class contempt within the working-class world while showing how the work force is being replenished in the age of data work, with the disappearance of laboring bodies from the social space.

Hidden within here is the idea of manpower itself being transformed into a thing. Thus, in 2015, the artistic duo of Stéphane Degoutin and Gwenola Wagon created the work World Brain. Among this series of video montages, one titled Are You a Robot? (figs. 5-6) was presented as a work in its own right at the 2017 edition of the Saint-Étienne Design Biennale. During the two minutes and seventeen seconds that video lasts, a dialogue is established between a male human being and a female voice from a call center trying to sell health insurance to her commercial target. The nature of this voice—whether human or the product of artificial intelligence—evades all clear-cut ontological categorization. And yet one is not mistaken to try to drive it into a corner: “Are you a robot?” is the nagging question the client shoots at his interlocutor. While she is able to state, “I am a real person,” the negative response, “I am not a robot,” will never be uttered. “The voice,” or rather the entity from which it emanates, could not reveal the origin of its vibrato.

Is one dealing with a thing, or with a human being? The fear of reification, broached in Degoutin and Wagon’s work, testifies to the ontological jammings that seems to constitute one of the main themes of contemporary artistic production. For, while artists—those producers of things par excellence—have always put stock in things, both as sources of representations and as collectors’ objects, those female and male artists who make up the contemporary period reserve a special treatment for such ontological hybrids—for those quasi- or near-human things with which industrial civilization is ceaselessly confronted.

KOHN, Eduardo. How Forests Think: Toward an Anthropology Beyond the Human. Berkeley: University of California Press, 2013.

A former student at the École Normale Supérieure of Lyon, Camille Richert is currently a PhD candidate in Art History at the Sciences Po History Center, where her dissertation work is being supervised by Laurence Bertrand Dorléac. Her research work bears on the representation of the gestures of labor from the 1960s to the present. Lecturer in Political Humanities at Sciences Po during the 2017-2018 school year, she is also in charge of and the pedagogical tutor for the 9th edition of Sciences Po’s Contemporary Art Prize.