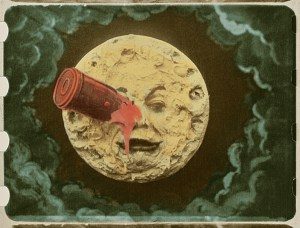 Considering a rocket as a gigantic thing, this object refers us back to the history of science and technology.  But Elsa De Smet also describes it in industrial and political terms.  Then, before being something really constructed, it was a prominent fantasy and, necessarily, a representation—in its own way, a “still life.”

“I like the forms imposed by modern industry,
I make use of them: steel, with a thousand colored reflections,
is more useful and more solid
than so-called classical subjects. Rockets are among the gigantic things that appeared in the twentieth century.  They are a culmination of a technological project that belongs to the history of science and technology. Rockets are also industrial objects, for those who supported their construction, as well as a political object, in the context of their emergence.  From the standpoint of the cultural history of the spatial realm, rockets were, above all, dreamed and imagined objects, vehicles for many philosophical and ideological ambitions; they crystallized a century’s ambition to turn outward, toward the Universe, and to go into Space.  Before first being built, they led the first part of their lives within the history of representations, in the world of illustrations, and they were to be still lifes before they became animated objects.

Leaning on the precepts of Diderot and D’Alembert’s Encycopédie, according to which, on account of it not being very customary to describe engineering and technological feats [les Arts et Métiers] as a way of explaining them, “a need for figures arises.  For, a glimpse of an object or a representation thereof says more about them than a page of words.”[1]  The first works to popularize knowledge in the nineteenth century rested largely on figurative representations of the tools and devices that allowed one to gain access to scientific knowledge in astronomy.  Leaning on a tradition according to which “ideas are made in brass,”[2] the effort to explain the universe through a presentation of the breadth of technological objects reflects, metonymically speaking, the power of knowledge while bearing witness to progress in science.  Still more, images of such objects testify to the existence of the thoughts that are suggested by having access to these objects and bear witness to the experience of knowledge that can occur in conjunction with them.  In 1854, the Clepsydre de Ctésibius restituée par Perrault d’après Vitruve (Ctesibius’ clepsydra reconstructed by Charles Perrault, after Vitruvius), as drawn in François Arago’s L’astronomie populaire opened the way to a technological aesthetic dedicated to the glorification of the outward effects of knowledge.  Such an aesthetic was expressed in modestly manufactured, perfectly smooth, and shiny objects of the kind Jules Verne would later take up in his lunar diptych (From the Earth to the Moon, 1865; Around the Moon, 1869) and Georges Méliès for his Trip to the Moon (1902).  Practical engineering was unabashedly combined with mythic adventures that took on the look of universal fantasies, and the crafts that would transport travelers to the Moon were never depicted as anything other than solid, new, and highly resistant.

The pleasure of attending to the intellectual deployment of humans’ capacities to reinvent themselves in modern machines continued nonstop, as the popularizers of the first stages in the field of astronautics well understood.  In Germany, Hans and Botho von Römer shared with their age an enthusiasm for scientific progress and a desire to spread knowledge thereof as broadly as possible.  Through their illustrations, these brothers brought out their own convictions about the ontological force of an image and about its capacity to render visible what the imagination and the mind are able to conceive through reliance on ongoing progress in the natural sciences and technological development.  For the members of Hermann Oberth’s Verein für Raumschiffahrt, the von Römers executed several frontispieces for the review Die Rakete in 1927, which thereby allowed readers a glimpse into the legacy left over from the pure tradition of popular-scientific illustration—a tradition, based entirely upon an optimistic view of technology, that had existed ever since the eighteenth century.  And yet, like Expressionist cinema, for which some of their vignettes could have served as storyboards, and in line with a futurist-looking stylistic trend in the arts, their artistry fully fit into a way of identifying with the promises of a technician’s future.  Each vehicle thus represented seems ready to take off, spin about, and soar away in a dynamic movement underscored by a set of contour and drop-shadow effects.

During that same era, in France, a more landscape-oriented, and more picturesque, form of spatial art was established wherein the voyage into Space expressed a sort of mental transposition.  Such a transposition could occur therein only through recourse to picture-like illustrations reliant upon an overall scopic system and connected to conventional forms of painting that stretch from Vitruvian perspective to the notion of the “ideal view” taken up for the caption.  Within the context of the popular-science works that employed them, such features became the necessary conditions for the proprioception discussed by Ernst Gombrich, which itself is indispensable for any experimentation with nature via representation.  For, while the naturalistic landscape of French art had begun to encroach upon visual culture during the second half of the nineteenth century, it became the reference template for the popular astronomy illustrations of the twentieth century. As with John Constable, and dating back to Galileo, painting wishes to be seen as a science, even a philosophy of nature.  The landscape of Space—a seductive as well as rewarding object for novice readers who like to linger over popularized works—also works as a kind of proof, the “artist’s view” of a truth, of a piece of evidence rendered charming through romantic feelings and the figurative representation of effects connoting permanence.

These spectacular views of planets seen from the ground of their satellites were going to have a broadly contaminative effect on scientific and cultural illustrations and become the site for the first astronomical projections executed by the American Chesley Bonestell as well as for the campaign conducted for the attention of the American public in the 1950s, before the Space Race commenced.  The stage was set, and cosmic nature was presented in a sufficiently theatrical way for people to absorb the details of an extraordinary adventure in which the dramatic design of an anticipatory historical painting awaited only the introduction of  a rocket-object.  The codified landscape became the perfect background, the ideal decor for laying out such projective images and parading about all the actors, costumes, and objects belonging this new “New World” under construction.  Via images and through the force of repetition, that world took on a significance of its own.  It mattered little how realistic was the vessel being placed there each time; the only thing that counted was the combination of the landscape and its new occupant, which transports us visually to the spot as sovereign inhabitants of this phallic object, without anyone having to doubt its robustness, its strength, and its stability.

Viewed from within the history of its representation, a rocket is an element in the construction of the myth of Space, which makes it “pass from a closed, silent existence to an oral state, open to appropriation by society, for there is no law, whether natural or not, which forbids talking about things.”[3]  Beyond what constitutes it, a rocket momentarily becomes the vehicle for all mental and figurative representations about Space via a socially visual usage rendered appropriate to and fitting within the dreams of a culture we have now gone beyond.  With more than a century of hindsight, we can now say that Méliès’s intuition in 1902 to set a Vernean cannon shell on the Moon and give it figurative form on a landscape view lit by the Earth was greatly ahead of its time from an iconographic standpoint.  The mere acknowledgment that this motif has spread across science-fiction culture suffices to prove the aptness of this stroke of inspiration and corroborate the future it was to enjoy in the area of modern graphic mythologies.

Elsa De Smet received a doctorate in the History of Contemporary Art in 2016. Her dissertation, defended at the Sorbonne-University of Paris IV under the supervision of Arnauld Pierre, focused on twentieth-century space exploration from the standpoint of visual exploration.  She is also an exhibition curator, a collaborator in the Arts-Science Laboratory of The Space Observatory at the Conservatoire National des Arts et Métiers (CNAM; French National Conservatory of Arts and Crafts), and an Attaché Temporaire d’Enseignement et de Recherche (ATER, temporary teaching and research attache) at the University of Reims.