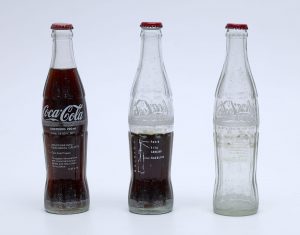 Paula Barreiro López connects guerilla tactics—which had become a common way of attacking established power, especially in regions that were called at the time the “Third World”—with the actions of artists who wanted in their own way to upset settled systems on both sides of the Atlantic. How did they set about doing this, what objects did they recycle, in what respect were they connected to political guerrilla warfare, and in what respect can one speak of “dissident objects”? While answering these questions, Barreiro also locates a constellation of things in anticapitalist and anticolonialist struggles, which witnessed the development of an entire revolutionary imagery but also masks, performances, and actions.

A Guerrilla War of Things?
Objects, Subversion,
and Anti-Imperialism Fig. 1 Cildo Meireles, Inserções em Circuitos Ideológicos : Projeto Coca-Cola (Insertions in Ideological Channels: Coca-Cola Project), 1970, three Coca-Cola bottles, one empty, one half full, and one full, each with silkscreen printing in Portuguese or in English on the glass, 24.5 cm, gift of the artist, 2006, Paris, Pompidou Center

In 1970, the Brazilian artist Cildo Meireles presented to MoMA his Coca-Cola Project (fig. 1), in which he recycled bottles and manipulated them (by writing some subversive messages) before reinserting them within market circulation (Freitas, 2007: 65). This project was both a Duchampian questioning of the role of objects (qua capitalist/colonial products) and of their status within the aesthetic framework of contemporary art and an act of counterinformation against the military dictatorship and capitalist imperialism in which this dictatorship developed. The work was understood within framework of what the critic Frederico Morais designated as “guerrilla art” (Morais, 1970), a syntactic reappropriation of one of the most widespread—and, by the cultural Left, admired—models of struggle on both sides of the Atlantic.

Since World War II, guerrilla tactics had become a common way of counterattacking the established imperialist and institutional powers, particularly in Third-World regions. The Cuban Revolution, the actions of the Viet Cong during the Vietnam War, and the guerrilla movements in Bolivia and Brazil have furnished the artists and intellectuals of the Sixties with the nearest examples. These offensive actions showed that sabotage, ambushes, and hit-and-run raids by small groups with unconventional forms of conduct could have a decisive impact in the fight against an army with superior troops, means, and organization.

Since the advances of Augusto César Sandino in Nicaragua, guerrilla warfare has been rooted in a program of national independence and national liberation opposed to the forces of capitalist and colonial oppression, which would be reinforced by the victory of Fidel Castro and Che Guevara in 1959 (Craven, 2006). In fact, it is thanks in great part to the triumph of the Cuban Revolution and to its program of revolutionary expansion that guerrilla warfare received strong support as a model of military, political, and cultural action in the Sixties.

While guerrilla warfare was understood by the established institutional powers as an exercise in terrorism, for the revolutionary Left it was becoming a legitimate means of violence, comparable to revolution itself. For Guevara, the guerrilla was not only a military strategist but a “social reformer” (Guevara, 1971: 64) involved in the implementation of a new system of economic, political, social, and cultural organization. Within this context, artists, art critics, writers, and, in general, “intellectual” workers—as Castro named them (Castro, 1968)—were called upon to participate in a cultural guerrilla movement in order to combat imperialism, which made official the transition from the engaged intellectual to the revolutionary one. Now, this process was going to complicate (and even stifle) the creative practice of many of them (Gilman, 1999).

In the case of artists and intellectuals from both sides of the Atlantic, the cultural guerrilla movement brought together many practitioners at the center of a conscious strategy of conducting a counteroffensive against the capitalist, imperialist, and colonial social system wherein many of them felt themselves to be “exiles in [their] own society” (Jouffroy, 1967). At a time when the bipolar opposition of the Cold War was increasingly being spurned by left-wing intellectuals and artists (who sought to disalign themselves in relation to the US/USSR axis), the guerrilla movement extended beyond the peasant and urban field of battle to become a useful tactic in the sphere of art (Barreiro, 2015).

While Germano Celant spoke, in 1967, of a Povera guerrilla movement and Umberto Eco of semiotic guerrilla warfare in Italy, a year later Julio Le Parc in France and Roberto Matta in Cuba called for a cultural guerrilla movement “in all domains where subversive thought and imagination have a role to play” (quoted in Jouffroy, 1967). Finally, in 1970 in Brazil, Morais piloted a new artistic category called “guerrilla art,” in which various conceptualist practices converged in the implementation of “ambushes” (Morais, 1970).

Despite the symbolic force of banding together that a cultural guerrilla movement had for all these authors, it was never a question of establishing some clear normative principles or of explaining how such a guerrilla movement might take form in the field of the visual arts. Nonetheless, some general common lines of approach appear in their writings, such as: an intention to contest the established system, alignment with the working class, and a weaving together of metaphorical ties between the destruction/reconstruction of the visual-arts space of the artistic avant-garde and that of the guerilla movement in a sociopolitical space. Le Parc inquired into the possibilities of “A Cultural Guerrilla Movement,” seeing that the question was no longer aesthetic but political: “What counts is no longer art, but the attitude of the artist” (Le Parc, 1968: 169). The frame of the cultural guerrilla movement was sufficiently large, flexible (and vague) to welcome various languages, going from painting to performative and conceptual practices. Yet, while the issue at the time was oriented toward one’s attitude, we may now ask what the role of the object was in this sort of artistic guerrilla warfare.

Art, Guerrilla Warfare, and Their Things The direct action demanded by guerrilla warfare went hand in hand with the recovery of the subversive value of “things.” First of all, the circulation of images of guerrilleros (which were omnipresent in the press and on the televisions of the time) codified a media iconography of the global guerrilla movement that rapidly found its place among the era’s artistic practices. The constellation of objects the guerrilla movement represented (and with which it was made), such as weapons (pistols and rifles but also paving stones) and uniforms (pants, vests, military boots and caps), became the object of many reappropriations in pictures as much as in installations and performances. Equipo Crónica’s Pop displacements (fig. 2) and Valie Export’s personification are some obvious examples (fig. 3).

It was also by setting artistic practices at the center of revolutionary processes and of urban guerrilla warfare that the artwork’s value overflowed the boundaries of the aesthetic space, via a belligerent reactivation of its character as object. Thus was the guerrilla movements’s arsenal radically expanded by endowing posters, paintings, solidarity medals, books, and magazines with a fundamental revolutionary character in its offensive actions conducted within various contexts and geographic regions. While a military look allowed one to identify the Black Panther Party members’ demand for active defense, the posters, books, and newspapers accompanying their cultural ecosystem also were part of the ideological and visual equipment of their urban guerrilla movement. On account of their multiple, inexpensive, and easily distributed character, posters and silkscreen prints became for artists means for visual experimentation and revolutionary participation. One’s integration into the realm of revolt occurred by renouncing one’s integration into(bourgeois) institutionalized arts spaces, as well as their aesthetic value. Posters were to be found in the street (in the “ghetto itself,” Douglas, 1968) as Emory Douglas, Minister of Culture for the Black Panther Party, said). Using dissident objects, the producers of posters sought to establish new connections among artworks, artists, and viewers. For example, the Atelier Populaire of Paris’s École Nationale Supérieure des Beaux-Arts did not try to define its productions in terms of their visual-arts character and their aesthetic value but instead by their function and political effectiveness: “[they were] weapons in the service of the struggle and are an inseparable part thereof” (quoted by Flood and Grindon, 2014: 20).

Circa 1968, this conception was still being applied to traditional works of art (paintings, sculptures and frescoes) that were also attempting to go beyond the exclusive category of art object. The search for a new status for works of art as bearers of a value equivalent to actual physical guerrilla weapons was one of the most fascinating commonplaces among left-wing artists and was highly extolled by the May Salon painters who had come to Havana in 1967 (Barreiro, 2016). Posters, paintings, and frescoes became the customary means of revolutionary participation, but they were not the only ones. Like the urban and peasant guerrilla movements, artists adapted themselves to the necessities on the ground, bringing new objects into the arsenal of revolt. For example, in 1976 the Madrid artists’ collective Familia de Lavapiés manufactured masks with the face of the republican poet (and martyr) Miguel Hernández (Fig. 4) for a massive commemoration in his hometown (Orihuela, Valencia). Manufactured with makeshift materials and intended to be worn in large numbers, the masks were useful instruments for hiding people’s identities during demonstrations that were spontaneously organized, and during which the police charged and arrested certain participants. But they were powerful instruments of memory, too. By transforming the demonstrators into a crowd of Miguel Hernándezes (a highly symbolic figure for the anti-Franco Left), they revived the heritage of revolutionary struggle from the Spanish Civil War, which Maoist groups (including Familia de Lavapiés) wanted to reactivate since the last years of Francoism (Corbeira, 2004).

In foregrounding their (political, antisystemic, and countercultural) attitude, artists of various latitudes and contexts, but with shared ambitions, succeeded in activating objects in a subversive way. The mechanisms and degrees no doubted differed. They might seek to detourne the meaning and function of things, qua products of the capitalist and colonial economic and ideological model upon which the power of the West rested (Meireles). They might reappropriate from the guerrilla movement its things (Equipo Crónica) and its attitudes (Export) within the work, or even transubstantiate that movement in an instrumental object from the urban guerrilla movement (Familia de Lavapiés, Douglas, or the Atelier Populaire).

Nevertheless, while the symbolic power of the guerrilla movement contributed to its ubiquity within the artistic practices of the Sixties and Seventies, that movement also participated in its own reification within the capitalist and media system of that era (Crowley, 2014: 219). Within the context of the practices of which we have spoken, it was, in any case, in connection with the micropolitics of everyday life that these things, members of a family of disobedient objects, were activated. Defying the conventional models of production and artistic reception, they exhibited solidarity and participated in the revolt.

BARREIRO LOPEZ, Paula. “Collectivization, Participation and Dissidence on the Transatlantic Axis during the Cold War: Cultural Guerrilla for Destabilizing the Balance of Power in the 1960s.” Culture & History Digital Journal, 4:1 (2015). http://dx.doi.org/10.3989/chdj.2015.007.

Paula Barreiro López is a researcher in the Ramón y Cajal program at the University of Barcelona’s Department of Art History. She directs the “Decentralised Modernities: Art, Politics, and Counterculture in the Transatlantic Axis during the Cold War” project (HAR2014-53834-P), and she teaches the History of Art of the second half of the twentieth century. Her research examines artistic exchanges as well as networks and cultural politics in Europe and in Latin America during the Cold War. Among her latest publications: Avant-garde and Criticism in Francoist Spain (2017); Modernidad y vanguardia: rutas de intercambio entre España y Latinoamérica (2015, with Fabiola Martínez); Crítica(s) de arte: discrepancias e hibridaciones de la Guerra Fría a la globalización (2014, with Julián Díaz); La abstracción geométrica en España, 2009.