Betrand Badie is the author of Rethinking International Relations, a thought provoking book in which he argues that there has been a shift in the major IR paradigms and that ignorance of such transformation is a cause of conflict and instability. Professor Badie answers our questions on his understanding of the discipline, on its transformations, on issues of power and nostalgia...

You mention in your book that when the IR discipline was constituted its founding fathers failed to consider history, which you say was a serious error. Is this to say that IR theories remain ahistorical?

Most of IR theory was constituted in North America in the aftermath of World war II, in an epistemological atmosphere dominated by positivism, behaviourism and, universalism, three orientations that leave history aside. In this vein, empirical sociology—often quantitative—international law (Hans Morgenthau was a jurist), and of course political science were at the origin of this profusion of paradigms, deeply marked by the victory of the United States against Nazi Germany and therefore by the idea of power, considered just and fair. History could have shown that such power politics had not always dominated the international game and had not even the same significance in all times and places. But all this was hidden by the burning issues of the time: not only 1945, but also the much sought for new balance of power with the USSR and the arms race in the very new context of the nuclear age. Everything else was forgotten: times of apolarity, pressure by societies on the international game, moments when power was defeated, and the extreme diversity of cultures of the international. This new political science only talked about itself and its time! It was blind to everything else that would soon be called “periphery” while this was precisely the place from which a new world would be born few years after…

Why are you in favour of a historical sociology of International Relations?

Because the human and the social are by nature historical and because international relations are first and foremost human and social: they fall under the “ordinary social fact,” as Emile Durkheim, who inspires me greatly, would put it. The dominant realist theory has always pleaded for exceptionalism of the international in the name of a purely ideological vision, largely forged from the idea of “great power” and the mythification of the nuclear weapon elaborated at the time these new paradigms were born. As a result, this pseudoscience has been totally blind to phenomena that rapidly took hold: decolonization, globalization, depolarization following the fall of the Wall, the rise of major global social issues, the pressure of transnational social movements. Not only history, but also the social dynamics that structure it are indispensable to understanding the “real” international relations and to not limiting oneself to the scum of rivalries between NATO and the Warsaw Pact! International Relations needs to go beyond the simplistic yet commonly shared approach of traditional geopolitics!

Precisely because this pseudoscience wants to convince us that we are still in the context of the beginning of the Cold War: it makes us live in a past world, thus made unreal and imaginary. It makes us believe that a new Battle of the Marne will allow the definitive defeat of the Islamic State and bring it directly to Rethondes, that old powers can, through their army or even simply through their words and injunctions, deal with everyone’s problems, that seven of them can solve all the world’s problems through the invention of the G7, that the sanctions they enact are necessarily good and useful and that the sacrosanct national interest is at the core of the global game, in ignorance of the collective stakes and interests of which, in reality, all states, big and small, old or young, are custodians.

Yet this hyper-conservatism is all the more blinding and strong, such that leaders and public opinions from the North are—more or less consciously—convinced that the old world was more favourable to them. For it was indeed the world of their domination, marked by a comfortable monoculturalism that relegated the periphery to the stratum of barbarism or at least under-development: to the point that one would almost forget one’s own ancient barbarism (Nazism, fascism, colonial excesses…). Even better, the old world relished its resurrection by making its new Stalinist enemy the expression of the new evil. This time of Cold War had become that of self-sanctification. Today, the nostalgia that it arouses in the Western world leads mechanically to mobilizing hackneyed schemes to favourably distort new problems.

You mention that the current international arena is like a shadow theatre, in which nostalgia seems to play one of the main roles. What consequences does this have?

No one ever wins by looking in the wrong direction! Yet most foreign policies today are based on the old grammar of international relations, which leads to a significant number of negative effects. First, this outdated behaviour is perceived as arrogant in the Global South, which is badly affected by this old mandatorial attitude. This sustains this old parameter of humiliation, which has done so much damage for more than a century, fuelling resentment and violence: when Washington or Paris decide that “Iran must not have the nuclear weapon” everyone wonders—in Tehran, Isfahan, or Mashhad—in the name of what do these Princes make such sovereign decisions and refuse for a third country something they attribute to themselves, and that one of them even used in a murderous way!

But there is more: acting in an unreal world leads to committing huge errors of understanding and an aggravation of conflicts, to the point of losing them. Look at Vietnam, wars of decolonization, and the many external military interventions led by old powers that, without exception, have worsened things rather than solved problems.

On Power or the Lack of Power

Is it possible to decentralize power in the study of international relations? Is “weakness politics” the substitute to “power politics” or is it simply a different perspective on power?

I believe indeed that classic theory, and more particularly realism in its various forms, has built the idea of power as a simple given with no critical reflection. It missed the important work of theoretical innovation that political science had already initiated as early as the 1960s, considering power not only through its resources but above all through its capacities: since the United States covered 40% of global military expenditures, they could only be a “hyper-power,” as a French politician claimed one day. This meant it was impossible to understand why such resources could (and even would) lead to failure. Also, “state resilience”—as the reflex of a banal will to persist in being—was blithely conflated with the assessment of its real capacities that were already heavily undermined! The only remedy was the implementation of the concept of soft power just after the American failure in Vietnam, which was meant to complete the concept of hard power, judged to be insufficient. Here again the alternative approach was an error because this new form of power was very quickly proven to be capable of mobilizing, but unable to rally to US foreign policy those who were receptive to the concept of soft power!

Truth is more mundane: a socio-historical approach shows easily that other logics can be more decisive than power. What I call weakness politics suggests that in many situations, the effects of weakness trigger major processes of political achievement and decide, more than power, the course of events and the making of the global agenda.

How can a Durkheimian sociology help us analyse and understand modern international relations?

First, as I have indicated, by opening up the scope of the international beyond state interactions alone, by including all the social dynamics that are useful today to a complete knowledge of the international scene renamed “global space”: in short, the international becomes in a healthy way “an ordinary social fact” again. Second, by benefiting from this new basis, from all the tools of a Durkheimian sociology: concepts of social pathology, anomy, or integration are heuristic and even explanatory in international relations. Used to speaking the language of Weber in this domain, we had until now only envisaged the face of domination without ever considering that of the social fabric, despite its increasingly deterministic role in the international game, as we are witnessing these days!

On French Political Science and IR

The French scientific tradition in terms of the study of international relations is somehow strange and deviant… something that can actually paradoxically serve as a strength in the current crisis of theories! Historically, French political science has not been very interested in the international, preferring strictly national issues and leaving the international to historians (the French school of the history of international relations has always been strong and renowned at the global level) or to jurists (who are also numerous and renowned in the international domain)… Strangely in France, a permanent member of the UN Security Council, the very idea of a sector that would be dedicated to the study of international relations has been opposed: contrary to what can be observed in our European neighbour countries or in the U.S., there is no “IR department” in French universities; in research centres, people prefer be part of “area studies” than be “internationalists”. Some misleading epistemologies go as far as imposing a doxa questioning the very existence of this field of knowledge. In the same way, we have never been able in France to establish the equivalent of BISA ( British International Studies Association). I see at least one advantage to this disaster: in France we haven’t been stuck with the mainstream science of international relations and, thanks to history, sociology, and anthropology, we have been able to build new paradigms that are starting to be taken into account, even in the United States where the failure of old science has to be faced. 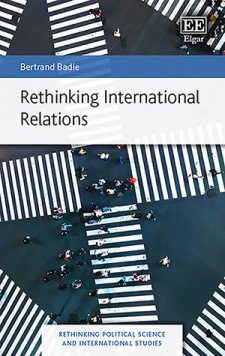