Justice is Steady Work. A Conversation on Political Theory with Astrid von Busekist

Michael Walzer and Astrid von Busekist have recently published a book entitled Penser la justice. Itinéraire du savoir. Forthcoming in English as Justice is Steady Work, this book is a conversation between two thinkers, dealing with some of the main themes addressed by Michael Walzer during his career. Professor of political theory Astrid von Busekist has accepted to answer our questions and to present this thought-provoking dialogue.

Can you trace the genesis of this project?

Astrid von Busekist: Very simple: I asked Michael Walzer whether he would be interested in having a conversation about his work, starting with his first pieces in Dissent about the civil rights movement at the end of the 1950s. He immediately agreed and our discussions have been very lively. We talked about his career as a professor, researcher, editor, political activist, in general and biographical terms; but we also addressed very specific problems pertaining to the interpretation of his books or articles and his quite unique position as a political theorist and public intellectual in contemporary America. Nations, states, borders, multilateralism, Israel and Palestine were also on board.

How did you proceed and how did you choose among the major themes of Michael Walzer's thought those you address in the book?

Michael Walzer has written many books (more than 30) and articles (a couple of hundred), but the choice has not been that difficult. We tried to cover the major topics—or rather, themes; they do not appear in any chronological order, Walzer has been addressing them in many different formats and contexts over the last 50 years.

The first series was obvious: the “classics” and major contributions to political theory: Just and Unjust Wars, Spheres of Justice, On Toleration, Thick and Thin: Moral Argument at Home and Abroad, “Philosophy and Democracy”, “A critique of Philosophical Conversation,” “Liberalism and the art of Separation” to name just a few.1

Another series deals with the way he conceives of social criticism (for example Interpretation and Social Criticism, The Company of Critics2), and what he calls the “political theory license”: political theorists have a license to take and to defend political positions explicitly. This is what he told me: “One of my last courses in Harvard was called simply ‘Socialism’, and it was a defense of my version of socialist theory and practice. And the only commitment I felt I had to live up to in the classroom was to tell the students about the strongest arguments against socialism.” The discussion around these texts was the opportunity to define what kind of political theorist Walzer is and what kind of political theory he actually favors.

Another very important strand in Walzer’s work deals with religion and revolution,3 and with the Hebrew Bible in particular.4

Almost none of the chapters in this book is dedicated to one of Michael Walzer’s books in particular. We proceeded by themes, including a biographical chapter, a chapter on political theory, and a chapter dedicated to Dissent, the magazine he edited for over 30 years.

I should add that we made these choices together, either spontaneously because that was where our conversation was heading, or because we decided deliberately that we should talk about this or that problem of interpretation or reception.

You write that Michael Walzer's philosophy and social criticism are both "unique and vital". Can you say a few words about this?

The short answer is: that is exactly what the book aims to show.

The longer one would go like this: Walzer holds a special position among the philosophers of his generation—although he does not define himself as a philosopher or as a “systematic thinker”. He is a strong defender of “small theories”; he dislikes “weird thought experiments” analytical philosophers cherish, and he always starts with historical, empirical examples. Walzer is a social democrat, committed to the preservation of particulars, to the respect of local values, and to the defense of pluralism. The liberalism he promotes strongly associates the virtue of separation with the virtue of sharing. It is an art both of difference and of conversation. This is why he has been labeled a “communitarian,” at times even a conservative. Both labels are wrong in my view.

His commitment to “shared understandings” is much more complex than a conservative, relativist or communitarian stance. According to Walzer, rather than the pursuit of interests and needs, a society is best characterised by a set of shared understandings that allow us to make sense of our practices: we cannot and should not conceive of justice as an independent variable. We should refer just practices to shared social values. According to Walzer, this is paradoxically not a communitarian, but a universalist argument. The idea that distributive justice is relative to the meaning of the goods being distributed is a universalist idea: it is meant to shape distributive rules everywhere. This attention to particular histories, to local circumstances and to different social goods, started before Spheres with his book on Just and Unjust Wars. Since wars are fought across political and cultural boundaries, you have to argue in terms comprehensible to people on both sides.

The ramification of the particular/universal dialectic also enlightens Walzer’s analysis of tolerance and mutual respect. Indeed, in contrast to an explanation grounded in conservative or relativist communitarianism, this dialectic offers a more convincing explanation for his commitment to political belonging and to societies’ self-government and self-determination. It also grounds the importance he gives to the nation and the state. Values such as loyalty, friendship or patriotism have a universal meaning, yet to experiment with their blessings is always a singular experience.

It is by starting from particular experience that we can hope to mutually rise to the recognition of universal principles through repetition, successive additions, debates and discussions about our “specialised” morality, and that we can hope to identify as creative agents of that morality, as “moral makers”. Such identification implies, however, that no universal code is “correct”, and that no one code has the last say regarding morality or justice.

In short, Walzer does not define a theoretical position or a philosophical critique detached from reality. His work rather echoes the program and commitment of Dissent’s founders, to which he dedicated a great deal of time and labor. To show its proximity to real politics and to its readers, Dissent explicitly defines itself as a “magazine” rather than an academic journal and, thereby, stands out from the sectarianism and theoretical purity of the ivory tower.

Dissent expresses pluralist commitments. It is political, “connected” with social problems, and with the difficult battles internal to the American left; it sets a stage for debate and takes into account its authors’ engagement to shaping a democratic culture. Created by two young ex-Trotskyists in the 1950s, the magazine met a remarkably long-lasting success, partly due to the fact that its contributors took the lessons of social critique seriously. Always amongst the closest to events, Dissent has managed to grasp the American Zeitgeist while providing citizens with a critical mirror wherein to reflect.

What Walzer has in mind is simple and deep: we assign norms and values to things and goods that govern our relationship with them and with other individuals. Things, or (material and immaterial) goods, are therefore intermediaries of social relations, and must be understood as something more than goods simpliciter. They become, through their circulation and through the complex process of determining their meaning, liaison officers between individuals. They literally create the social world.

Walzer insists on the importance of the reflexivity of the thinker and social critic. The importance of the situation of the speaker within the society he is scrutinising. Do you share this idea? And how do you think a political philosopher manages to take the right and necessary distance?

As I said earlier, “small theories” and interpretation (as opposed to discovery and invention) are the key terms. An interpreter does not feel the need to have the final say. He prefers the “more or less” and the infinite variety of readings that preserve ongoing adaptations and changes. This is a lesson learned from the rabbinical tradition: endless reading, relentless engagement with the text and with changing social practices.

Fundamentally hostile to the final adjudication of meaning, the interpreter is able to change their mind, to dive back in the books, and to revisit their work. Through the creative and argumentative work of social actors, social critique takes the form of an uninterrupted dialogue: with friends, family, our fellow citizens and our adversaries. It is a “pluralising” activity grounded on—and also producing—social meaning. It is certainly “useful to have a theory,” but it is even “better to tell stories […] even though there is no definitive and best story,” says Walzer.

I do share this view, and I don’t believe that proximity or distance are the real issue. The main idea behind this kind of social criticism is that distance per se is not a virtue: detachment or even contempt for one’s own people is a way of dealing with problems of justice, equality, domination, etc. that is neither generous nor efficient. It is a typical symptom of many philosophers who set themselves apart from the “moral texture” of ordinary life, from “shared understandings” or “thick morality,” and hence miss their target, namely addressing real life problems here and now. Universal principles (thin morality) are important, they set standards, but they are abstract, they cannot capture the concrete lives of different individuals in different societies. In a sense, this is not that far from the argument of philosopher and political theorist Judith Shklar: in order to say something meaningful about justice, one must have a sense of “experiences of injustice.” Thin morality on the other hand may be minimal, but it is plural and originates in the pragmatic cohabitation of individuals or partnerships between nations and states. First, one needs to acknowledge the cultural creativity of each community and the equal value of them all. This is how Walzer summarises this idea: “[One comes] to pluralism only through an act of empathy and identification [...] the value of universal truth is as uncertain when seen from inside a particular community as is the value of pluralism when seen from outside every particular community.”5

In the book Penser la Justice, Walzer concludes on p. 237, “We need to defend democracy and constitutional government; we need to resist anti-immigrant ethno-nationalism; we need to protect our most vulnerable fellow-citizens; we need to stop the exclusion of minority voters from the electorate; we need to prevent ecological disaster. And, most important, we need to build a coalition capable of doing all the things we need to do.” What does the political scientist Astrid von Busekist have to say about this?

I certainly agree – how could one not agree? Walzer addresses the most important values of democracy in this quote. It echoes many of our conversations and debates. I have said so earlier, the struggle for democracy, for a better world is an ongoing battle and it would be an illusion to believe otherwise. 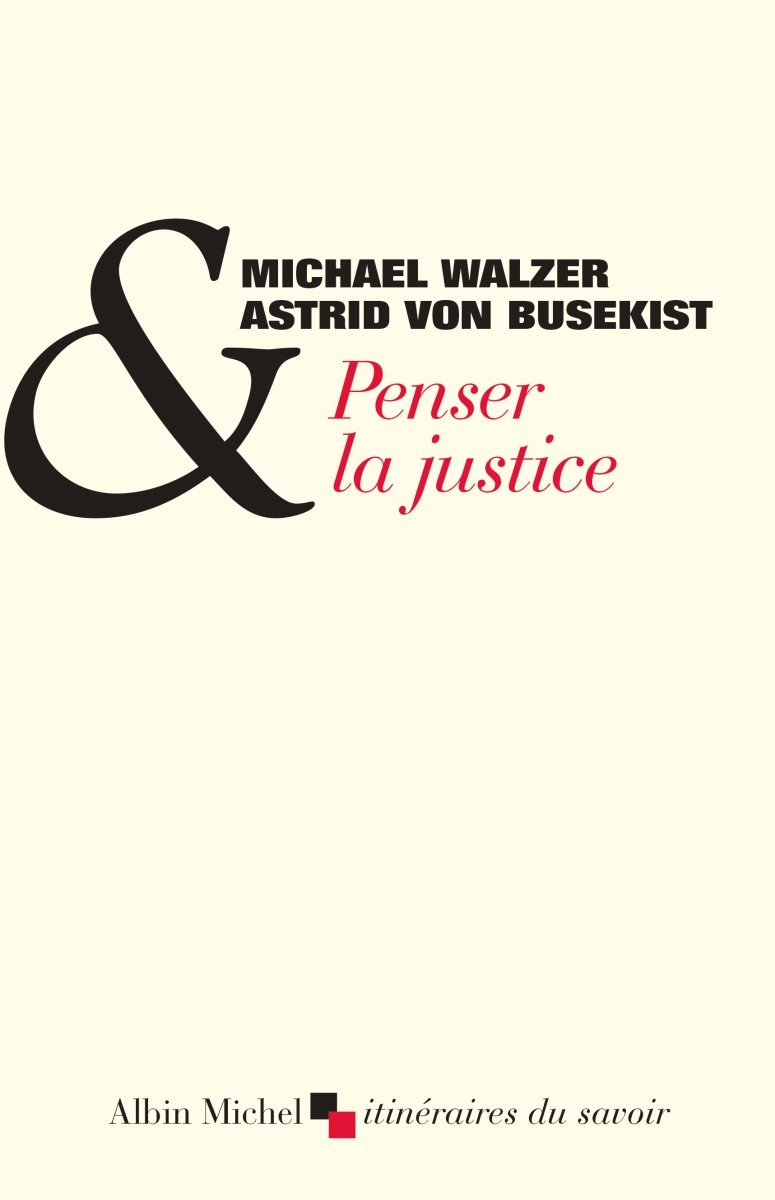 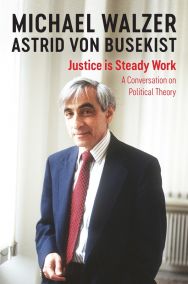