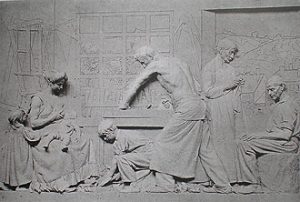 In Les Misérables, Victor Hugo had the revolutionary student Enjolras say that the nineteenth century was great but that the twentieth would be happy. At any rate, the nineteenth century did identify with the tremendous upsurge of progressivism that was making itself felt at the time in the name of a social ideal and through a series of reforms, of which the reform of the fine arts seemed increasingly inevitable.
Progress was envisaged, on the one hand, as growth or development, on the other as a process of “equalization of conditions.” Alexis de Tocqueville identified the latter as the very mark of the modern sociological and anthropological process, a process he examined under the new heading of democracy.
In the world of art, this growth, “and above all that of well-being,” passed by way of a will to reconcile the beautiful and the useful, artisans and artists, architects and interior decorators, builders and painters, political thinkers and artists, as well as by way of a thorough revision of an outmoded way of teaching the fine arts that foresaw no point of passage between the arts, on the one hand, and the role and duty of the artist, on the other, in a society that, it was hoped, would become better, more harmonious, less inegalitarian.
In actuality, the world of art was going to have to be brought down to earth and be made to take note of the long-standing failure to effect a reconciliation of the arts. In France more than in England or in Germany, this effort was undermined by a series of factors : the backwardness of entrepreneurs and their lack of imagination as well as an overly timid defense of an ethic of political, social, and culture change.
“That art might flourish, that the nation might prosper, and that the worker might earn a living, we need perfect prototypes suitable for faultless mass production, with the confidence an ever better disciplined and ever more flexible scientific knowledge guarantees to industry.”
The artist therefore had to position himself upstream from the production process and offer models that would beautify the interiors of homes, lighting the way with his functionalist good sense. The resulting eclecticism did not truly bode well for the much longer history of the still ongoing project of allying art with everyday life.

Arts and Crafts vs. Art nouveau?
Art and the Turn-of-Centuries Debate on Nations

History has no greater interest, as every historical specialist has said since Marc Bloch, than to throw light upon the future and to help clarify the destiny of humanity. Historiography is inevitably the mirror of this mission, of this tireless quest.

Is the Arts and Crafts Movement Incompatible with Art Nouveau ?

After the debate over the arts of the first decade of the twentieth century, which was illustrated by the competing Exhibitions of London and Paris, the debate has rebounded to focus on the Arts and Crafts Movement and Art Nouveau. While on a visit in the Cotswolds to Hidcote Manor (known for its extraordinary garden), Rodmarton Manor (with its magnificent period furniture), and Kelmscott Manor (one of the residences of founding father William Morris), Véronique Cauhapé summarized this discussion in the June 9, 2005 issue of Le Monde (pp. 22-23) :

“The Arts and Crafts Movement is based on the ambitious project of transforming society as well of reforming work and people’s lifestyles. It aimed to be a deep current, less superficial, formal, and aesthetically-inclined than Art Nouveau, which, during the same period, held sway in particular in France, in Belgium, and in Spain.”

And further on, she states :

“The Arts and Crafts Movement and Art Nouveau were first cousins. But cousins only. For, when one really looks into the matter, one cannot forget that this country [i.e., the United Kingdom] is Protestant. Arts and Crafts furniture and objects did indeed have stiffer lines, rougher postures, a more austere look than those of Art Nouveau, which expressed, in an extraverted way, their eccentricity. The latter reflected, in short, a Mediterranean culture.”

This view, which surely has been simplified to fit the needs of the newspaper’s readership, has the merit of summarizing still-unresolved questions. Once Art Nouveau is reduced to three countries (and in fact three cities, Brussels, Paris, and Barcelona, plus the atypical excursus of Nancy), the Arts and Crafts Movement could, on the other hand, be said to have flooded the rest of the Western world and even, if one follows the exhibition at the Victoria and Albert Museum in London, Japan, in the form of the Mingei Movement, which became established in that country between 1930 and 1945, that is, during the height of imperial expansion. That is enough to say whether the connotations are laden with meaning : What path does modernity follow exactly in the East and in the West ? What were their meeting points and points of connection ? A century later, one touches upon the same questions about the global market–here, the art market–and about the rise in national feeling, if not of nationalism per se. Much more than historical, the stakes are contemporary. Via history, it is really our outlook on the world today that is in play. Economists (above all Pierre-Cyrille Hautcoeur) remind us indeed, by a rebound effect, how much the period of the “Great Depression” of 1870-1895, and then that of the growth of various nationalisms, from 1895 to 1914, offer, if not commonalities, at least some indisputable analogies with the early twenty-first century.

The Edifying Adventure of the “Art in Everything” Group

In France, besides some colloquia, several recent dissertations have fueled reflection by basing themselves on case studies, for example, on the Nancy School (Hervé Doucet’s Art Nouveau et régionalisme. Émile André (1871-1933), architecte et artiste, University of Versailles-Saint-Quentin, 2004) and on the Belgian home (Françoise du Mesnil du Buisson’s Gustave Serrurier (1858-1910) : Parcours d’un architecte à l’aube du XXe siècle: Rationalisme constructif, art social et symbolisation, University of Versailles-Saint-Quentin, 2004). Rossella Froissart has contributed to this major effort at renewal by training the spotlight on a gathering of Parisian artists called the “Art in Everything” group. L’Art dans Tout was short-lived but active and not very large but attentive to the substance of the quarrels going on about the decorative arts in connection with architecture. In setting out to lay the groundwork for the utopia of a new art, how did these people greet the drift toward nationalist feeling ? The author is detailed in her answer, which has the merit of being at the same time both nuanced and suitably emphatic about the specificity of what was going on in France. The main characteristics are mentioned : the influence of Saint-Simonian thought upon social art, which reached into the highest spheres of the State ; the narrow paths of a protomodernity (the connection between everyday decor and present time) ; the at once radical and reductive influence of a Paris convulsed by the Baron Haussmann ; France’s timid approach to styles, which were mirrors of academicism more than vehicles, as elsewhere, for novelty ; and the incapacity of French decorators to carry out a long-term program with effective support from industrialists. France was already suffering during this period from an unbridgeable gap between its artistic elites and its economic prowess : the momentum was lacking in unity there, and, despite the country’s deceptively intellectual image, fidelity to doctrine was inconstant. Nevertheless, the members of the “Art in Everything” group do offer a quite subtle and varied portrait of a still vigorous artistic circle, and yet one torn too much into diverse and barely compatible tendencies : Ruskinian (Jean Dampt), realist (Alexandre Charpentier), rationalist (Louis Sorel), functional (Félix Aubert), theoretical (Charles Plumet), and moralistic (Étienne Morrau-Nélaton). One may then understand the strengths and weaknesses as well as the riveting hold that attempts at renewal were going to offer to a tragically reactionary and aggressive nationalist opposition whose main concern was to reestablish the genius of a France that had been washed up since the demise of the Ancien Regime and that, by way of consequence, could find nothing better to reincarnate itself in than revivals of the country’s era of undisputed glory, that of King Louis XV. This was the absurd dream of a backward-looking power.

The Arts and Crafts Movement as Enlightenment for the Civilized World ?

The sumptuous London Exhibition offered a diametrically opposed overview. This exhibition retained the point of view that the Arts and Crafts Movement, whose bases were initially shaky because they were built upon idealistic life and work principles, swiftly found a way to form an alliance with other nationalist tendencies (by integrating local traditions, resources, and know-how) and, in the same stroke, to answer to social needs. With the help of a vast array of examples, among which tribute must be paid to some splendid comprehensive reconstructions of interior decors, the curators have tried to show both the vigor and the worldwide scope of a movement that was defined by the unity of its simple yet germane concepts. Its works were the product of this unity that had been achieved through the adoption of an ethic of the democratic age and through a willingness to place this ethic in the service of political, social, and cultural change. Contrary to what happened in France, the effort in the United Kingdom bore on the status of craftsmanship and centered around industry’s attempts to overhaul the conditions under which artistic objects were manufactured. The success of the Arts and Crafts Movement is therefore first of all the success of its entrepreneurs. That is beyond doubt. In the United Kingdom and, especially, in the United States, which was a young nation then in search of national cohesion, fascinated by the original creations of its old indigenous populations and socially suited to the engagement of small-scale rural firms. And yet the application of the same schematic argument to most of the rest of Europe is unconvincing. For, it obliges one to split up the exhibition into a series of emaciated national sections. It does not account for the in fact quite disparate development of national feeling upon the Continent, and it has the drawback of making the Arts and Crafts Movement and Art Nouveau into overly cohesive and watertight movements, one of which would have succeeded and the other of which failed. Generally correct in its economic assumptions, the argument does not work when art is called upon to reflect politics. Visions of the past therefore really do appear, here again, to be passports for the present.

Jean-Yves Andrieux is a historian of contemporary art, a professor at the University of Rennes, and an expert at the Office of Architecture and National Heritage (French Ministry of Culture). He is also a member of the editorial committees of the Revue de l’Art and of Histoire urbaine. Andrieux edits the “Destinies of the National Heritage” collection at Éditions Belin and coedits the “Art and Society” collection at the Presses Universitaires de Rennes. Author of Patrimoine et Histoire (Paris: Belin, 1997) and of Patrimoine et Société (Rennes: Presses Universitaires de Rennes, 1998), he is publishing this Spring at Belin L’abbaye de Sénanque: Berliet et l’invention du mécénat industriel, as well as the Acts of the international colloquium held at UNESCO in 2002, entitled La réception de l’architecture du Mouvement moderne. Image, usage, héritage (Saint-Étienne: Presses Universitaires de Saint-Étienne).