Accueil > 201124 - Europe's Crisis of Legitimacy. Governing by Rules and Ruling by Numbers in the Eurozone

201124 - Europe's Crisis of Legitimacy. Governing by Rules and Ruling by Numbers in the Eurozone 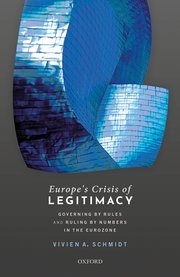 Prior to the COVID-19 pandemic hit, Europe’s sovereign debt crisis had remained arguably the worst of the European Union’s many crises of the past decade. The health pandemic now rivals the Eurozone crisis in terms of its potentially crippling long-term effects. But in this new context, there is all the more reason to look to and learn from the Eurozone crisis, which has not just been a crisis of economics or of politics but also of legitimacy. The EU took the wrong course in 2010 in responding to the Eurozone crisis. Rather than bold initiatives, EU actors ended up ‘governing by the rules and ruling by the numbers’, with a focus on austerity and structural reform. As a result, the Eurozone suffered from deteriorating economic performance while the politics became increasingly toxic, as mainstream parties declined and populist challenger parties prospered.

Fortunately, the story doesn’t stop here. Having recognized that things had gone awfully wrong, European leaders and officials began to change Eurozone governance slowly and incrementally after the first couple of years, by reinterpreting the rules and recalibrating the numbers. But because EU actors reinterpreted the rules ‘by stealth,’ that is, without admitting it to citizens or even, often, to one another, legitimacy remained in question. Fundamental flaws persisted, with suboptimal rules hampering economic growth while feeding populism. And even though, by 2015, most EU actors began to acknowledge their rules reinterpretations, the damage had been done. Subsequently, while the eurozone’s economic policies and governance processes remained problematic, with the deficit and debt rules in particular damping investment and economic recoverty, additional crises, including the migration crisis in 2015 and the UK’s vote to exit the EU in 2016, only further contributed to the EU’s difficulties with regard to the politics.

Legitimacy can be defined not only in terms of a governing body’s authority (based on citizen consent in the traditional Weberian sense) but also of its governing activities. Such legitimizing activities have three components: ‘Output’ legitimacy is related to policy effectiveness and performance, ‘input’ legitimacy to political representation and responsiveness, and ‘throughput’ legitimacy to the quality of the governance processes. Applied to the case of the Eurozone crisis, we can stylize its crisis of legitimacy as one in which EU actors initially assumed that all they needed to do was to reinforce the rules (throughput) to guarantee good policy performance (output) and citizen acceptance (input), only to find that performance worsened along with citizens’ attitudes. But subsequently, by reinterpreting the rules without admitting it, although (output) performance improved, perceptions of the quality of the (throughput) processes plummeted while the (input) politics continued to worsen.

In addition to discussing general issues of EU legitimacy, this book explores questions involving the (throughput) legitimacy of different EU actors’ governance during the Eurozone crisis. It offers a janus-faced view of EU actors as it asks such questions as: Should the Council be considered a (German-led) dictatorship, in particularly in the first two years of the crisis, as Northern European ‘creditor’ countries forced Ireland and Southern European ‘debtor’ countries to pay the full costs of the crisis? Or was it a mutually accountable deliberative body, in particular as Council deliberations ensured that it moved from a focus on stability alone (2010) to growth and stability (2012), flexibility with stability (2014), and then investment (2015)? For other EU actors, further questions include: Should the ECB be seen as the hero of the crisis, saving the euro, or an ogre, as it pushed austerity and structural reform and forced vulnerable countries into conditionality programs? Was the Commission made up of ‘ayatollahs of austerity,’ as it recommended rapid deficit reduction and harsh structural reforms that cut welfare and crushed unions in the first years of the European Semester, or ministers of moderation, through its subsequent use of administrative discretion to increase flexibility in the application of the rules and shift to increasing socialization of the European Semester? And was the European Parliament a talking shop, with little influence, or a potential equal partner, as it voiced increasing criticisms of other EU actors while becoming their ‘go-to’ body for legitimacy?

After evaluating the procedural quality of Eurozone crisis governance, the book follows with assessments of its policy effectiveness and political responsiveness. With regard to output legitimacy, we find that EU actors misframed the crisis as a problem of public debt (rather than private), misdiagnosed the crisis as one of bad behavior (rather than the structure of the euro), and therefore chose bad remedies (austerity and structural reform) rather than lasting solutions, such as mutual risk sharing through Eurobonds, a European Monetary Fund, the ECB acting as a lender of last resort (LOLR) through monetary easing from early on, and more.

As for input legitimacy, the political impact of Eurozone policy performance and governance procedures was naturally highly detrimental. Over the course of the crisis, citizens’ rising Euroskepticism against a background of declining trust was fueled by the socio-economic effects of people feeling ‘left behind,’ the socio-cultural fears of declining social status, and the political desire to ‘take back control’ in the face of increasing globalization as well as Europeanization. The result has been growing political polarization and party realignments in the shadow of the rise of populist anti-system parties, together with the decline of mainstream parties in the periphery as well as the core to the benefit of populist extremes on the right, on the left, and in the ‘radical center.’

The book seeks to deepen our understanding of a crisis that has threatened not just the economic and political stability of Europe but also the very project of European integration. What distinguishes this book from many others on the Eurozone crisis is that it uses the lens of democratic theory to examine the crisis from vantage points that analysts tend to deal with separately, including in different fields—political economy, politics, and governance—and at different levels—EU and national. In addition to theorizing about democracy and legitimacy in the EU, the book uses the analytic framework of discursive institutionalism to highlight actors’ legitimating ideas and discourse during the Eurozone crisis. The book concludes with proposals for how to remedy the EU’s problems of legitimacy, reinvigorate its national democracies, and rethink its own future.

The good news today, during this terrible time during yet another crisis, the Covid-19 pandemic, is that EU actors appear to have learned from the Eurozone crisis. Many of the recommendations in the book’s conclusion are in process, including stopping the Eurozone’s ‘governing by rules and ruling by numbers’ (even if currently just suspended), creating EU level debt instruments (even if only temporary), and promoting serious investment for equitable growth and combatting climate change. The responses to the COVID crisis, in short, reverses\ some of the worst legitimacy lapses of the past while developing policies and processes suggest that the EU has least made a good start at getting beyond the dysfunctions of the past!

Vivien A. Schmidt’s honors, awards, and fellowships include the European Union Studies Lifetime Achievement Award, a Guggenheim Foundation Fellowship, the SWIPE (Society for Women in Political Economy) award for mentoring women from the International Studies Association, an honorary doctorate from the Free University of Brussels (ULB), the Belgian Franqui Interuniversity Chair for foreign scholars, a Rockefeller Bellagio Center Residency, and Fulbright Fellowships to France and the UK. She was also recently named a Chevalier in the French Legion of Honor. In addition her book, Democracy in Europe, was named by the European Parliament as one of the top one hundred books written on the European Union since its inception (in 2015) while her book, Democratizing France, received a special award at the Gaston Defferre Prize Ceremony in Marseilles (in 1992).

Vivien A. Schmidt has also held appointments as professor at the University of Massachusetts/Boston and as visiting professor at a number of major European universities and institutes, including Sciences Po in Paris, LUISS Guido Carli in Rome, the European University Institute in Florence, the Max Planck Institute for the Study of Societies in Cologne, Copenhagen Business School and Roskilde University in Denmark, IMT Institute for Advanced Studies in Lucca, the Institute for Advanced Studies in Vienna, and the Universities of Paris and Lille. She has additionally been visiting scholar at Cambridge University, Oxford University, Warwick University, and at Harvard University’s Center for European Studies, where she is a long-time affiliate and co-chair of the Study Group on the European Union.
Professor Schmidt is past head of the European Union Studies Association (EUSA) and sits on a number of advisory boards, including the Wissenschaft Zentrum Berlin, the Vienna Institute for Peace, the Foundation for European Progressive Studies (Brussels), the Institute for European Studies, Brussels Free University, the Sheffield Political Economy Research Institute, and the Boston Council on Foreign Relations. She also sits on the editorial boards of numerous scholarly journals.