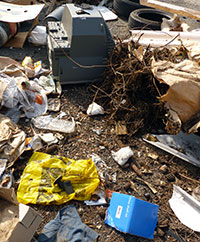 Waste products, a part of our everyday lives, have become an object of study for scientists who examine here their physical and technological but also anthropological, sociological, economic, philosophical, political, and ecological dimensions. While this object has for a very long time been granted privileged status in the scrutiny of past societies, it also allows us to portray in outline our own contemporary society, including its contradictions.  Experiments are being imagined at this very moment that lead us to think that, here too, our world may be said to be undergoing change.

Waste products are an integral part of our daily life.  But the garbage can calls out to us as soon as it is overflowing.  Waste has become a societal, indeed a current-affairs subject: among other issues, trafficking in toxic waste, burial of radioactive waste, and plastic waste products in the oceans have become “problematic” topics that are not just trivial.  When present in surplus amounts, certain waste products have now been raised to the rank of objects of study for engineers, economists, sociologists, and even philosophers.

A Dive into Our System of Waste Products

The idea that waste products are objects worthy of interest for the analysis and description of a human group, its behaviors, and its activities, as well as of its economic, cultural, and social level is not new.  One often reports this aphorism from Marcel Mauss (1872-1950), one of the founders of Anthropology: “What is most important to study in a society are its piles of garbage” (Soustelle, Harpet).  It was starting in the 1970s that some genuine methods of waste analysis were devised, independently, by the geographer Jean Gouhier in France and the archeologist William Rathje in the United States (Gouhier, Rathje).  These two authors developed a “waste science” grounded in the Social Sciences: a rudologie, for the French, and a “garbology” on the other side of the Atlantic.  Their basic postulate could be summarized as follows: “Tell me what you throw out and I will tell you who you are.”

It was also in the 1970s that the philosopher Jean Baudrillard described and criticized consumer society and its “system of objects” (Baudrillard 1968, Baudrillard 1970). This system of objects, consumption of which exploded in the 1960s, has resulted in an increased production of waste: the estimated production of all solid waste by humanity as a whole is said to have passed from around three billion tons per annum in the 1960s to nearly 15 billion tons per annum today (Duquennoi, 2015).

What quantity of waste products does that represent on a human scale?  One is tempted to respond by thinking of our domestic garbage can, officially called household waste: 430kg per person per annum in 2014 in France (figure from the Agence de l’environnement et de la maîtrise de l’énergie [French national environmental and energy management agency]).  But that is only the tip of the iceberg: if one counts all the waste produced in France, including waste products from crafts, services, industries, construction, and public works, of which we are all users and consumers, it is five tons per person per annum.  And that is not all: the greater part is made up of what economists call hidden flows, the waste products that result from the extraction of raw materials and fossil fuels, dirt or barren soils left on site in the course of mining operations, fuels or products used during manufacturing or the transportation to other places of products consumed here.  In all, some 40 tons of waste are produced by each French person each year, when considered on a planetary scale (Bellin and Duquennoi).

That being said, waste products are an inevitability.  For a living organism, producing them is even a sign that the organism is alive: every functioning metabolism, from the cell to the human body and passing by way of bacteria, produces waste after it has consumed resources.  This inevitability is nonetheless much trickier to make out as it does not seem so (see box).  When one attempts a scientific, epistemological approach to the notion of waste, one is quickly confronted with how relative that notion is.  Some extremely simple thought experiments allow one to bring out the fuzzy frontier that lies between “waste” and “nonwaste,” this fuzziness being tied in particular to the absence of any transdisciplinary framework that would render intelligible the general properties of what is described as waste.

Is Organic Waste a Waste Product?

Food waste, green waste, agricultural and forestry waste, waste from food-processing industries or from the food-service industry, which are commonly called organic waste products, were, by tonnage, the weightiest part of waste in France until 2014.  And yet, keeping in mind, among other things, the fact that they are biodegradable (they constitute a food source for certain microorganisms), a large portion has, at the instigation of European authorities, disappeared from our national accounting, agricultural and forestry waste products having become resources.  We are talking here about agricultural waste products reused on farms, dung, liquid manure, straw left on site after harvests or wood after forest cutting.  In France’s national accounts, organic waste products represent no more than 5 percent.  And when properly sorted, they will totally disappear from the chart as they are transformed into compost, fertilizer, energy, or heat from composting or methane gasification.

Nature has no need of a transdisciplinary framework in order to function harmoniously and economically, in the proper sense of the term.  In numerous ecosystems, organic waste products generated by “primary producers” (for example, plants) and by “consumers” (for example, herbivorous animals) are consumed by organisms described as recyclers (for example, bacteria, mushrooms, earthworms, and arthropods).  The waste products of recyclers in turn become nutrients for primary producers, so the cycle comes full circle!

The concept of a circular economy, which was originated in the late 1970s, is inspired by this functioning of ecosystems (Auriez and Gorgeault).  In concrete terms, it is a matter of transforming our dominant economic model, which is described as linear and which can be schematized in the following figure :

into a more sustainable economic system that operates in a loop :

A circular economy consists in economizing on raw materials while consuming less, designing ecologically, and recycling; it consists in exchanging among businesses, at the local level, liquid, solid, and gaseous flows that are waste products for some but resources for others; and it consists in reusing what can be reused, an age-old practice now brought up to date and accompanied by new solutions, not all of which are technology-based and which are often the result of mere common sense, like “reverse supermarkets”: well-organized waste recycling centers where each person can, for free, come to recycle that which others no longer want.

A World in Transition

Beyond just managerial and technical-mastery-based approaches to waste products, we have witnessed of late the flowering, a bit all over, of initiatives that are part of this paradigm change (Monsaingeon) on various societal levels, from political decision-making to citizen action.  Let us mention the ban on single-use plastic bags in France, starting in January 2017; the “zero waste” movement, for which citizens as well as municipalities have signed up (150 jurisdictions having joined in France); and also cleanup initiatives (#1PieceOfRubbish, #5minutesbeachcleanup, the Surfrider oceans’ initiative, plogging,[2] etc.).

Via our modes of consumption and our individual behavior, we are clearly those primarily concerned by this transition.  We have a fantastic potential for impact on the global production of waste products.  Numerous actions are possible, and many have already begun, like choosing what one buys, resisting low-cost options, buying sustainable items, relearning how to repair, reuse, better sort, share, or massively avoid a particular product but also rethinking our waste products, no longer considering them as “excretions” but as our own (and not dirty!) production (Bertolini) that can itself very well be recovered,  for example through the composting of organic waste products.

The Promises of a Systemic Approach

Waste products are a societal issue, obviously a complex one, that straddles as well as calls upon a number of scientific disciplines.  This was summarized very well by Cyrille Harpet when, apropos of these disciplines, he evoked “a notion of importance, as much on account of its material nature as on account of the series of concepts it brings out.”

In fact, the material nature of waste products is an object of research in physics, chemistry, material sciences, and process engineering.  These disciplines endeavor to separate and transform materials that are often found in alloys and complex assemblages in waste products.  People are also using biotechnologies that exploit the ability of microorganisms to transform waste products into potential resources—as, for example, during methanization, which allows one to obtain methane gas from microorganisms’ digestion of agricultural or food products.

As for the “series of concepts” brought out by the notion of waste product, it touches all social sciences, from Economics to Political Science and passing by way of Anthropology, the Social Sciences, Organization Studies, and so on.

At the frontier between the so-called social sciences and the so-called natural sciences, a theoretical framework called systemic appeared starting in the 1950s that has been expanded scientifically since the 1970s.  Broaching the notion of waste product within this conceptual framework offers particularly promising results (Duquennoi, 2019) not only from a theoretical standpoint but also from a practical one within a context where a raging debate will perhaps soon take place, if it has not already begun, between advocates of “zero waste,” partisans of the circular economy, skeptics of “high-tech” industrial management of waste products, defenders of degrowth, and faithful adherents to a “business as usual” approach.  This debate was initiated more than fifty years ago by a few precursors such as Kenneth Boulding (1910-1993), an American economist and philosopher who explained that people must free themselves from the cowboy economy of wastage so as to come closer to an astronaut economy, wherein nothing is wasted and only the resources one has on hand are used (Boulding).

[1]“Plogging” which originated in Sweden, consists in picking up litter while jogging.

Isabelle Bellin is an independent journalist who covers scientific topics.   For more than 20 years, she has written popularized science articles around themes relating to such varied areas as the environment, energy, technology, and data science for La Recherche and Les Échos, for specialized reviews, and for press agencies.  She also assists in science-based public relations for various research institutes and other institutional bodies.

Christian Duquennoi is a research engineer specializing in recovery through the bioprocessing of waste products at IRSTEA (Institut national de recherche en sciences et technologies pour l’environnement et l’agriculture; French national institute for scientific and technological research on the environment and agriculture).  For a number of years, he has taken an interest in an odd object of essentially multidisciplinary research—waste products—that extends far beyond the technologies involved in their treatment or recovery.