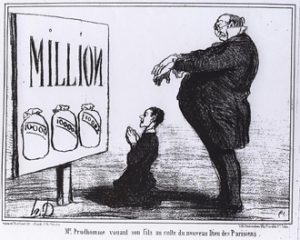 One must wait until the seventeenth century to see art become no longer just the object of isolated exchanges carried out in order to enlarge the coffers of churches and princes and to give itself out as a commodity to institutions capable of ensuring aboveboard transactions that would allow price comparison and therefore competition among buyers. Even if the existence of a first auction in Venice as early as 1506 is known, such institutions grew in number in the Netherlands and the system of transactions was set in place at that time, then in London and in Paris, which starting in the eighteenth century became a stronghold where objects of all provenances were traded. Still, very few sales at auction were organized until 1730, then once a month in the 1760s, and already almost once a week by the 1780s.
As regards galleries, Watteau has bequeathed to us the famous sign of Gersaint, which exhibited, all at once, pictures, sculptures, and objects of natural history. One witnessed the emergence of the figure of the dealer, who was often trained as a painter or engraver, therefore an expert, both an artist and a retailer–which is not surprising to connoisseurs of the nineteenth century. Jérôme Poggi offers us, in this regard, some new sources of interest. His unique study of the “anterooms of modernity” under the Second Empire shows us the metamorphoses of the art world and of its market–which, as we knew, fed on the decay of the Salon system but not to this point of wavering between two opposed models. The most audacious experiments in new commercial methods were undertaken by artists themselves and were based at the time upon a rather lively resistance to commercialization. Such experiments were born at the very origin of the modern market and naturally drew upon the utopias of the generation of the Revolution of 1848.
Descended from the Saint-Simonians and the Fourierists, Louis Martinet distinguished himself along these lines by allowing the great artists of the day to be seen rather than to be bought. Among those artists were Ingres, Manet, Delacroix, Corot, Rousseau, Millet, Courbet, and Carpeaux. He imagined the possibility of reuniting all the arts in one gallery that would also be a lively meeting area, a boudoir, and a concert hall. He failed, if you will, like the revolutionaries whose projects, not alien to these antecedents, would also fail in the future–particularly in France in the 1960s. He had to abandon his project, but the idea was not, for all that, thereby exhausted, nor had the broadly shared feeling disappeared that art is not a commodity like any other but, rather, an original object worthy of its own system of exchange.
Dominique Sagot-Duvauroux engages in a dialogue with Jérôme Poggi. As a fine connoisseur of the cultural economy, he sheds light on the present-day crisis of the traditional models. Amidst this crisis, we see reborn the debates and experiments from the nineteenth century with a desire to get things moving that, in his view, is not unlike the passion for reform under the Second Empire.

The Economic Models of Culture

The utopian experiment of the Louis Martinet Gallery between 1861 and 1865 as described by Jérôme Poggi stands at the intersection of two major issues that existed at the time: the establishment of a “market for contemporary art” that was organized against the system of the Academy in order to promote new artistic forms, on the one hand, and the definition of a system of royalties [de droit d’auteur] that would secure some resources for authors of published works, on the other. Thus were sketched out the two main models for promoting artistic creation that were going to dominate the cultural economy throughout the twentieth century: the sale of an original, nonreproducible work at a high cost, characteristic of the art market, and the sale of a reproduction or of a right of reproduction of an original work that, for its own part, is not to be exchanged (economy of the cultural industries). Now, these two models are today reaching their limits. The art-market model has a rough time promoting such “service-works” as performances or such nonstorable works as installations. The “publishing” model, for its part, is being weakened by digital technologies that reduce to nothing the cost of duplication of works and allow widespread pirating. Numerous, more or less utopian debates and experiments follow therefrom, ones that are reminiscent of the period of the Second Empire.

The Establishment of a New Market for Contemporary Art

The second half of the nineteenth century witnessed the sudden appearance of a new mode of promoting works in the plastic arts that was radically opposed to the then-dominant system of the Academy. In the latter, value was anchored in the work. There existed a conventional standard of Beauty that defined a hierarchy of aesthetic values. As “lector” painting, according to Pierre Bourdieu, academic art combined “a concern for legibility with a search for technical virtuosity so as to favor an aesthetics of the finished product.”[ref]Pierre Bourdieu, “ L’institutionnalisation de l’anomie,” Cahiers du Musée National d’art moderne, 24 (1988), p. 12.[/ref] Alongside the market for academic creation there existed a large imitative craft market. It did not enjoy the prestige of the Academy, but there was a very buoyant market for such imitations and demand was rapidly growing for such genres as portraiture and small-sized decorative paintings.[ref]See J. Chatelus, Peindre à Paris au XVIIIème siècle (Nîmes: Jacqueline Chambon, 1991).[/ref] Academic paintings came to find therein an unexpected source of income.
This two-legged system was weakened toward the middle of the nineteenth century for several reasons. The invention of photography rapidly came to threaten the portraiture, landscape, and reproduction markets. Photography obliged the painter to reflect on the specificity of his labor and on the nonreproducible nature of the “picture object.” Innovative movements then found, in a quite often unconscious way, their economic reasons for existence by being standard-bearers for a strategy of differentiation with respect to photography that became indispensable to the survival of one’s craft. In another connection, the instauration of a more general climate of (political and economic) free-market liberalism favored the challenging of the academic rules. The myth of the unity of art defended by the Academy was contested. Art became an end in itself and a decentralized market appeared as the best adapted mode for promoting the establishment of a hierarchy among artists and for remunerating their labor.
The world of contemporary art then put forward new rules for the promotion of art, ones based upon the originality of the artist’s approach, the singularity of the work, and its authenticity (convention of originality). From a market of works, one gradually went over to a market of artists that was organized around the figure of the entrepreneur-dealer. The Salon des Refusés, in 1863, constituted an important stage in the development of this new system.
Nevertheless, it was another model that Louis Martinet experimented with between 1861 and 1865. This model was based upon the idea of remunerating the artist in the form of a royalty payment. Recognition for this model became the object of a very lively debate at that time.

The Debate Over Royalties

Over the course of the nineteenth century, an intense debate did indeed bring together lawyers, economists, and writers around the nature of the author’s right of ownership over his work, around the most appropriate way of remunerating creative people, and around the balance between the interest of creators and that of society.[ref]For a detailed presentation of this debate, see Dominique Sagot-Duvauroux, ed. (2002), Dominique Sagot-Duvauroux (2005), Fritz Machlup and Edith Penrose (1950), “Droits d’auteur, vieilles querelles et nouveaux enjeux,” a special section of the review L’Economie Politique, 22 (April 2004).[/ref] This debate was set between two particularly important dates: the first laws on royalties in France during the French Revolution in 1791 and 1793 and the signing of the Berne Convention in 1886 (the first international agreement on copyright). It developed in a context marked by large-scale copying and pirating, particularly in Belgium and in the United States, which is reminiscent of the present-day context for music pirating on the internet. It was during this period that an opposition was sketched out between the American system of copyright–which protects the work over the author and which, for this reason, does not recognize the moral rights of authors–and the French system that protects the author over the work and which, consequently, grants this moral right.
In fact, as regards royalties, three positions became clearly distinguished at that time. For the French liberals and their leader, Fredéric Bastiat, while there would be a form of property ownership that was incontestable, it was that of the author over his work, and the law had to apply itself to protecting this property. For Pierre-Joseph Proudhon, Victor Hugo, and the American economist Henry Carey, the author’s ownership claim upon the work was only partial on account of the borrowings authors make upon the common fund of ideas. The law then has to take this co-ownership into account by paying works into the public domain beyond a certain amount of time. This position founds the French system of royalties. Finally, for the economists Léon Walras and Jules Dupuit, royalties were only a social convention to be valued with regard to their ability to satisfy the general interest. This view is the inspiration for the American system of copyright.
Beyond the economic foundation for royalties, another debate concerned the establishment of an international agreement whose purpose was to guarantee intellectual property rights at the international level. This period was indeed marked by abundant pirating, especially in Belgium and the United States. While European liberal, free-market economists militated in favor of such an agreement, the American economist Henry Carey, on the contrary, engaged in an impassioned plea for an American cultural exception. The pressure of powerful countries in favor of free trade and of an enlargement of the domains in which intellectual property rights could be applied expressed, in fact, only a will to preserve those countries’ monopoly incomes. This pressure would serve to maintain other countries in a state of cultural domination that would deter their development. We thus rediscover here, in inverted fashion, the terms of the present-day debate around the issue of the enlargement of Intellectual Property Rights (Khan 2004).[ref]B. Z. Khan, “Does Copyright Piracy Pay? The Effects of U.S. International Copyright Laws on the Market for Books,” Working Paper 10271, NBER, January 2004.[/ref]

On the Transformations of the Art Market at the End of the Nineteenth Century :

On the Question of Royalties :