Passion for Equality, the Economies of Art XIXth Century 2 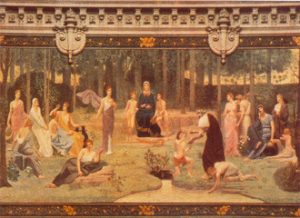 Society is not immune to what Richard Thomson calls a visual culture that in turn plays upon people’s mentalities. In the case of the French Republic between 1889 and 1900, he sees an opportunity to depart from the established categories of art history, which often limits itself to studying avant-gardes while downplaying the notion of the subject. What he discovers in the way of a connection between images and the societal debates is of precious value: there is the decadence of the nation, of the nation’s body; the nagging desire for revenge against Germany (art works showing this much more than literature); the creation of Darwinian representations of the crowd and of the working classes, the dangerous classes; the religious question, at the very moment when the Republic, weakened by the Boulangist crisis and the Dreyfus Affair, had to soften its anticlerical positions; and the emergence and spread of signs of a kind of sexuality whose harshness and crudeness offered a reflection of relations between men and women. None of all that remained alien to art, which was less an illustration than a reservoir of strong sensations and new manners.
With Thomson’s aid, it is not difficult to grasp how wrong it would be for us to treat the world of forms in isolation, sparing it the weight of history. This world does not follow upon political, social, and economic history but acts, rather, in accordance with its own tendencies and rhythms. And while it is affected by the times, it plays just as largely upon its influence over the forward march of societies. The author has broken down the barriers between the various fields of the human sciences in order to arrive at an original history of people’s mentalities. We should be delighted that his book, The Troubled Republic: Visual Culture and Social Change in France, 1889-1900, is to be translated and published in France. Rodolphe Rapetti, renowned for his writings on nineteenth-century art, responds to him after his own fashion, recalling to what extent there exists genre of original art history that revitalizes our view of an apparently already well-known object.

Richard Thomson is Head Curator of the French National Heritage. He has been the Curator at Paris’s Musée d’Orsay and then Director of the Museums of Strasbourg. He is presently Deputy Director of the Museums of France. Rapetti has taught at the School of the Louvre, as well as at the University of Paris-X (Nanterre), and has published numerous books and articles devoted to nineteenth-century art. In addition, he has been asked to be the curator of several exhibitions, including “Munch and France” (Musée d’Orsay, Paris, 1991-1992), “Gustave Caillebotte” (Grand Palais, Paris, 1994-1995), “Eugène Carrière” (Museums of Strasbourg, 1996-1997), and “The Unknown Horizon: Art in Finland, 1870-1920” (Museums of Strasbourg, 1999).
Rapetti is the author of the following works : Le Symbolisme (Paris: Flammarion, 2005), Americans in Paris, 1860-1900 (London: National Gallery, Boston: Museum of Fine Arts, and New York: Metropolitan Museum of Art, 2006-2007), Auguste Rodin–Eugène Carrière : Interférence (Tokyo: National Museum of Western Art and Paris: Musée d’Orsay, 2006).