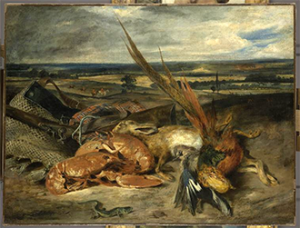 While Delacroix was not especially attentive to things, while he painted during his lifetime just one, though quite astonishing, still life (Still Life with Lobsters, preserved at the Louvre Museum), and while he was not himself a collector, either, and he even had declared his “dread of disorder,” this painter seems to have been attached to the objects he brought back from his 1832 voyage to Morocco.  Dominique de Font-Réaulx, who is the director of the Delacroix Museum and who has showcased Delacroix’s chest of oriental souvenirs in a recent exhibition, examines again here the nature of this attachment.

“A host of notes jotted on the run seem to me unintelligible.  On the other hand, I see clearly in my imagination all those things that did not need to be noted down and that are perhaps the things that are worth preserving in memory” Though connected to one of the greatest dynasties of cabinetmakers, the Oeben-Rieseners, Eugène Delacroix (1798-1863) seemingly did not show himself to be very attentive to the objects surrounding him.  In the literal sense, his painting and drawing work includes only one still life, which was specifically designated as such: his Still Life with Lobsters, executed in the late 1820s (Department of Paintings, Louvre Museum).  This canvas is quite singular on account of its dimensions, its subject, and its treatment.  The memory of his then-recent trip to England, his faithfulness to a pictorial tradition that combines Peter Paul Rubens and Jean-Baptiste-Siméon Chardin, and an acute sense of color contributed to his conception of a remarkably forceful painting, one that, in a twofold movement, still elicits both astonishment and admiration.  A few years earlier, Delacroix had drawn and turned into lithographs a series of plates, reproductions of coins and medals he had been able to observe in private collections and, perhaps, at the French Royal Library’s Medals Exhibition Room.  Far from giving in to literal copying, the artist undertook at the time a real compositional effort, enlarging objects and arranging them in such a way as to erect their reproduction into artwork.

In the composition of his lithographs, he glorified both the represented subject and the medal as a thing whose embossed surface and contours are evoked with masterful skillfulness in a play of shadows and light.  As Delacroix wrote many years later, he knew how to “imitate without be an imitator” and to remain faithful to his own way of expressing himself.  Well before the archaeological discoveries made during the last third of the nineteenth century, these medals offered him an intuitive insight into an oriental Greece.  Apropos of them, the critic Charles Blanc noted in 1864, shortly after the painter’s death: “With a feverish hand, Eugène Delacroix has abused all the lines, displaced the lighted parts, blurred the shadings, and transformed these coins, which are worth a thousand times their weight in gold, into effigies struck at the barbarians’ weighing scale.”

Objects of Creativity in the Midst of Studio

The artist also liked to evoke, in fleeting fashion, items found in his studio.  A beautiful wash from the collections of the Louvre Museum shows, at a corner window, a portable easel, the outlines of a paint can, some rags, and a painter’s palette hung from the wall by a nail (Department of Graphic Arts). Their contours softened, the objects of his creativity appear here as so many traces of the presence of the artist in this site where memory is superimposed upon the reality of the studio.  A highly curious oil painting on canvas from the collection of the Delacroix Museum, Study of Bindings, Oriental Jacket, and Figures after Goya, brings together in one and the same picture scattered fragments of different things, unconnected to one another, that could have served as models in the mid-1820s, when Delacroix was working on The Massacre at Chios or The Death of Sardanapalus (from 1824 and 1827, respectively; both works are now preserved at the Louvre Museum’s Department of Paintings).  On a vibrantly black background, a gold and red vest of oriental inspiration, no doubt borrowed from his friend Jules-Robert Auguste (1789-1850), stands out along with two evangelistary book covers richly decorated with gemstones.  In the lower lefthand part of the painting, Delacroix took his inspiration from Goya, reinterpreting one of the motifs from the Spanish artist’s Los caprichos series, that of plate 27, ¿Quién más rendido?  The painter thus elevated what could have been just a study on paper to the high level of painting, retaining from the study the unique composition and the arrangement of the objects.  He underscored their colorful brilliance, thus bringing out the inspiration drawn from Goya.  He kept this work in his studio until he died.  During the sale organized in February 1864, after his death, it was acquired by the critic Philippe Burty.

Delacroix was not a collector.  This artist even had, as he wrote in his Journal, “a dread of disorder.”  The inventory drawn up after he died indicates the everyday possessions of a man of his time, evincing neither ostentation nor accumulation.  The sole notable exception consisted of the set of objects he had brought back from his voyage to Morocco in 1832.  There, Delacroix had acquired several objects manufactured in craftsmen’s studios; these objects—earthenware, babouche slippers, clothing, weapons, leather items—were not of great value, but he prized them enough to retain them, as he moved from studio to studio, until his death in 1863.  He was careful to ensure that they would be handed down, bequeathed to his friend the painter Charles Cournault (1815-1904), whose taste for North Africa and its traditions he well knew.  And yet it seems that Delacroix did not exhibit these objects; instead, he kept them hidden, if one is to believe reports, in a large chest located within his studio.

Like the colorful watercolors he executed during his trip and like the notes he took at the time in his notebooks, these things were valued less for their own sake than for their capacity to bring forth, in as intact a way as possible, the impressions felt by Delacroix during his Moroccan tour, the sole major voyage in the life of this homebody painter.

The need to retain the memory of these things preoccupied the painter as early as the first weeks of his brief stay in the Sherifian kingdom.  Investigation into one’s connection with the model and the role of the detail in relation to the overall impression had posed for Delacroix, even though he did not do so in a deliberate way, the question of the status of the object as sign and as bearer of meaning.  If one is to believe what he mentioned in his letters and his notebooks, it was rather early on that he decided to acquire some articles of local craftsmanship.  His fascination with fabrics shines through in his writings, the draping of Moroccan clothing evoking for this young, cultivated man the patrician elegance of Antiquity.  Thus did he write to his friend Jean-Baptiste Pierret:

Imagine, my friend, what it is to see lying in the sun, walking in the streets, or mending old shoes, such consular characters, Catos and Brutuses lacking not even that disdainful look the masters of the world must have had. . . .  Classical art has nothing more beautiful . . . .

For Henri Duponchel (1794-1868), his set designer friend who later became the director of the Paris Opera, Delacroix described with enthusiasm the beauty of these costumes, promising to bring back some of them to this lover of theatrical subterfuge and to show them to him.  While still in Morocco, he intuited the need for memory to take on material form in order for it to be retained:

The costume is very uniform and quite simple, and yet on account of the different way of adjusting it, it confounds one by the beauty and nobility it takes on.  I count on bringing back enough sketches to give an idea of the bearing of these gentlemen.  Moreover, I will carry back originals of most of the items of their outfit.  I will gladly spend a fortune for that and for the pleasure you will have in seeing them.

The Imaginative and Memory-Inducing Power of Things

Delacroix was constructing, particularly through his writing, a unique, imaginative, and poetic connection to his Moroccan voyage.  He thus set himself apart from the painters who were voyaging to the Orient, many of whom attempted to rediscover on their canvases the exact memory of their adventure and to offer to the public as literal a view as possible—or at least allegedly so—of their journey.  The Romantic painter accepted, and even sought out, the kind of distortion imagination afforded memory, setting the filter of his pictorial creation in front of a description of Morocco.  In 1853, when he was beginning to reflect on the use of models—a reflection he pursued in 1857 and 1858, at the moment when he was drafting a never-to-be-published fine-arts dictionary—he noted in his Journal:

I began to do something of passable quality, during my trip to Africa, only at the moment when I had sufficiently forgotten the small details so as to recall in my pictures only the striking and poetic side; until then, I was hounded by the love of exactitude, which the great majority take for truth.

In order for things to retain their full evocative and memory-inducing power, it was wise for the painter not to look at them too often; transforming them into banal studio furnishings might have made them lose that powerful memory-inducing quality he had granted them.  Delacroix had acquired a penetrating familiarity with the workings of his own psyche, which the literary exercise of writing in his Journal and keeping up his correspondence had enhanced.  He knew the key role played by memory, by recollection, in the pursuit of his artistic creativity.  The material art of painting fed upon the ephemerality of literary composition, thus helping him to retain its full imaginative power.  Though present in the studio, it was no doubt advisable for these objects to be endowed, despite their tangible aspect, with all the qualities of memory, like so many traces of the deep impressions that had moved Delacroix and that prompted him, throughout his life, to engage in a renewal of pictorial invention.

In his relation to objects, the painter thus evinced a highly precocious psychological modernity.  In his literary practice, he displayed a rare talent for introspection sustained by a dialectical play of opposites that charmed him.  Very early on in the nineteenth century—a century that had witnessed the development of the study of the human mind and the invention of psychoanalysis—Delacroix had the intuition that there is a connection between object and memory, reality and imagination, recollection and creation.  After his first publication, in 1893, Marcel Proust became a reader of the artist’s Journal.  There is no doubt that Delacroix’s talent as painter and writer charmed him, and no doubt, too, that that talent was, in a way not yet fully analyzed, a source of inspiration for his own investigations.