[POLICY BRIEF] Gatekeepers and platform regulation : Is the EU moving in the right direction ? by Francesco DUCCI 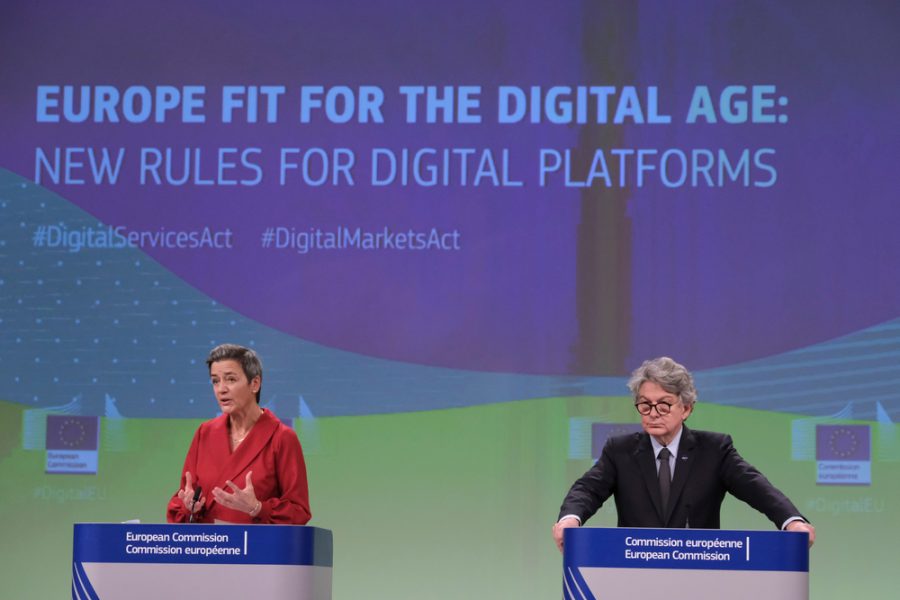 On December 15, the European Commission published two proposals for Regulations that are designed to significantly transform the legislative framework applicable to digital service providers. This new legislative package was long-awaited: the President of the Commission announced it as soon as she took office (Ursula von der Leyden, Political Guidelines for 2019-2024, 2019) and the Commission made the official announcement during the presentation of its digital strategy last February (European Commission, Shaping Europe’s Digital Future, February 19, 2020). In June, the Commission officially announced the forthcoming adoption of a “Digital Services Act”. A public consultation, which ended on September 8, focused on several possible avenues: the revision of the provisions of the E-Commerce Directive 2000/31/EC, the creation of a new regulation on gatekeepers, and the possible adoption of a new competition law instrument. The legislative package presented on December 15 is now divided into two distinct pieces of legislation: the Digital Services Act, which updates and supplements the provisions of the E-Commerce Directive on the regulation of illegal content, and the Digital Markets Act which imposes strict obligations on the platforms that control access to digital markets (“gatekeepers”). We will deal here with the Digital Markets Act while the Digital Services Act will be discussed in another blog post.

Although a competition instrument had been announced, the Digital Markets Act does not constitute a competition tool as such. Rather, it is a market regulation whose main objective is to guarantee equal opportunities for digital players by imposing ex ante rules. The reasons for the adoption of a new legislation are well known. The business model of major digital service providers is quite specific. Big platforms constitute two-sided, or multi-sided markets, in which they have market power over several categories of users benefiting from cross-network effects. On a collaborative economy platform such as Uber, the utility to participate in the platform is all the more important as the number of users of the other category (passengers, drivers) is important. And the number of users (from all categories) on the platform is dependent on the prices charged by the platform. Moreover, big platforms control the architecture of their interface, which users usually access through proprietary applications. Within this framework, platforms frequently compete with business users to offer goods and services on their own terms. Finally, major digital service providers have the ability to collect the data generated by users and to use it for their own benefit. All these features lead to high market concentration and to the emergence of situations of domination and entry barriers.

In this context, traditional antitrust tools seem powerless to correct abusive practices and act on the market structure. It is true that European competition authorities regularly open investigations and have already, on several occasions, heavily condemned major platforms such as Google in July 2018.  However, antitrust does not currently allow to sanction all damaging behaviors. Some competitors align their prices without concluding an agreement. Dominant players tend to systematically acquire their potential competitors, which are usually small and disruptive companies: this phenomenon is known as “killer acquisitions”. In addition, antitrust sanctions often come too late, following lengthy investigations, even though digital markets are evolving very rapidly. Finally, antitrust remedies do not always have an impact on major platforms, whose resources are enormous. All in all, the current tools do not make it possible to tackle structural problems.

These findings explain the choice to adopt an ex ante regulation to regulate the behaviors of most powerful actors. Not only is the Digital Markets Act not a competition tool but it does not aim to regulate only companies in a position of domination.  It covers, more broadly, all platforms in position to control access to the market, therefore being able to be qualified as gatekeepers. We will therefore examine here the criteria for designating the companies covered by this Regulation (1), the specific obligations or prohibitions set out in the proposal (2) and the sanctions that may be adopted by the European Commission in the event of non-compliance with the Regulation (3).

The Digital Markets Act is meant to regulate companies who provide or offer core platform services to business users or end users (art. 1). It therefore applies primarily to all platforms that provide online intermediation services (marketplaces, collaborative economy), search engines, social networking, video sharing, number-independent interpersonal communication, cloud computing, advertising services or operating system (art. 2(2)). The Regulation applies to all platforms offering their services to users established in the European Union, irrespective of their place of establishment or the law applicable to the provision of their service.

It is also necessary that these platforms can be qualified as “gatekeepers”. To do so, they must meet three cumulative conditions (Article 3):

It should be noted that the platform’s ability to control the architecture while competing with business users was not considered to be a relevant criterion to qualify as a gatekeeper. Instead, it was decided to take market capitalization into account so that companies that do not yet have a large number of users in the European Union but have a strong financial capacity can be subject to the Regulation. In any case, most gatekeepers should correspond to the very large platforms subject to significant obligations under the Digital Services Act. However, the criteria provided for in the proposal are not absolute: it will be up to the Commission to designate gatekeepers (art. 15), if necessary after investigations. The Commission will be free to designate as gatekeepers companies that do not meet the thresholds or offer services not listed in the Regulation.

2. Obligations and prohibitions imposed on gatekeepers

Sections 5 and 6 of the Digital Markets Act include lists of various obligations and prohibitions that should significantly change the daily lives of platform users. Contrary to what had been announced, the proposal does not include “black” or “grey” lists: all the obligations set out in the Regulation will have to be respected. Meanwhile, the proposal draws a distinction between obligations that are directly applicable (Article 5) and those that are susceptible of being further specified (Article 6). Finally, the proposal provides for an obligation to inform about concentrations (article 12) and to disclose profiling techniques (article 13).

Article 5 lists directly applicable obligations (and prohibitions), the main purpose of which is to strengthen the independence of professional users.

Article 6 lists the prohibitions and obligations that will be subject to further clarification, if necessary. These clarifications should be given in a dialogue between the Commission and the gatekeepers concerned. The Commission may specify in a decision the measures to be adopted by a given gatekeeper in order to comply with the Regulation (Article 7).

Gatekeepers will have to inform the Commission of any intented concentration involving another platform or digital service provider, irrespective of whether or not the transaction is subject to control by the European or national competition authorities (Article 12). This obligation seems to respond to the difficulty raised by “killer acquisitions”. However, the notification of concentrations does not appear to have the slightest consequence: the Commission does not have the power to oppose the concentration, except if the provisions of antitrust law are applicable.

Any techniques for profiling of consumers that the gatekeeper applies to or across its platform shall be subject to an independent audit that will be communicated to the Commission (Article 13).

In principle, all the aforementioned obligations will have to be respected by gatekeepers. This respect should be by design, which means that compliance with these obligations will have to be incorporated into the technology where appropriate. Nevertheless, it will be possible for the Commission to impose only a subset of these obligations on those who do not yet enjoy an entrenched and durable position (Article 15(4)). The Commission may also exceptionally suspend the execution of an obligation that threatens the economic viability of the platform concerned (Article 8).

The Commission, assisted by the Digital Market Advisory Committee (article 32), will be responsible for investigating and reporting violations of the Regulation. The Commission may issue a Decision of Non-Compliance (Article 25) in which it will order the gatekeeper to cease its illegal behaviour, to comply with its decision within a specified time period, and to provide an explanation of how it plans to comply with the decision.

The Commission will be able to impose fines in amounts similar to those provided for by the rules of competition law. For the most serious violations, such as failure to comply with the obligations under Articles 5 and 6, the Commission may impose on the gatekeepers fines not exceeding 10% of their total turnover in the previous financial year. This means that a company like Facebook, which in 2019 had revenues of $71 billion, could be fined up to $7.1 billion. In the case of less serious infringements, such as failure to comply with the obligation to notify concentrations (Art. 12) or to audit profiling techniques (Art. 13), the Commission may impose fines not exceeding 1% of the total turnover of the previous year. Continuing infringements may result in fines payable on a periodic basis, with payments of up to 5% of daily turnover.

The Regulation also provides for the possibility of ordering, in most extreme cases, structural measures such as legal, functional or structural separation, including the divestiture of a business, or parts of it. Article 16 provides that where a gatekeeper has systematically breached its obligations and has thereby strengthened or extended its position as a gatekeeper, the Commission may impose any behavioral or structural remedies that are proportionate to the breach and necessary to ensure compliance with the Regulation. Structural measures may extend to structural separation, but will only be possible in the absence of an equally effective behavioral remedy or where the structural measure would be less burdensome to the gatekeeper than a behavioral remedy. In any case, it is noticeable that the Commission has decided to introduce such measures into an ex ante regulation while it has often been said that structural measures have their place among antitrust tools. In practical terms, this means that divestiture of a business could be decided primarily on the basis of the violation of the obligations set out in the Regulation, but without engaging in the usual in-depth competition law investigations

All in all, the proposed Regulation provides for very stringent obligations and heavy penalties. The proposal grants the Commission significant powers, including the power to amend the content of the Regulation if necessary. At the same time, the Regulation does not leave any room for maneuver to state authorities. The proposal even prevents Member States from adopting national legislation imposing further obligations on gatekeepers (art. 1 (5)). Moreover, if this text were to be adopted as it stands by the European institutions, the question of its articulation with antitrust law and the Digital Services Act would have to be addressed. Its effectiveness should also be questioned. Indeed, although it is true that the obligations imposed by the Regulation are largely inspired by the current practices of the largest platforms, one may nevertheless question the choice of an asymmetrical regulation focusing exclusively on the most important players, while smaller companies may also engage in reprehensible practices with equally harmful effects on the market.

Florence G’sell is professor of law and co-chairholder of the Digital, Governance and Sovereignty Chair