Turkish Islam and COVID-19. Referring to History and Traditions

As everywhere else in the world, in Turkey COVID-19 is at the heart of current affairs. This deadly plague that operates without ethnic, confessional, or political distinction should have brought about a sacred union among the population and a mobilisation of everyone for the salvation of all. However, the political class remains divided and the authorities in power are doing nothing to put an end to the polarisation Turkey has been suffering from for the past several years. The political treatment of the health disaster in Turkey has been discussed already,1 but what about the religious treatment? Measuring the impact of this crisis on Islam on a daily basis and analysing the way Turkish religious authorities interpret this epidemic and respond to its consequences through in-depth research is our medium-term objective. The questions raised in this article are the starting point of this research.

The total disruption of the daily routine implemented in Turkey in an attempt to protect the population from the spread of the virus, i.e. the compulsory confinement of under-20-year-olds and over-65-year-olds, followed by a total ban on gatherings in cafés, restaurants, stadiums, concert halls, and mosques and the closure of schools and universities, affects all social activities, including religious life. In a country such as Turkey, where the secularism of institutions coexists with strong traditional practices, the imposition of restrictive measures on collective activities such as group prayer in mosques is not an easy task, especially in a very exceptional period like the holy month of Ramadan. Recourse to religious authorities has proved to be of the utmost importance for the faithful, especially since Sunni Turkish Islam, which has no clergy, is in fact closely supervised by a multitude of bodies whose opinions are de facto binding on believers. Indeed, in practice, Turkish Islam is more or less clericaliszed. All its groups are crossed by different doctrines. Whether official Islam or the multiple brotherhood movements, all are informed by doctrines. In any case, in this exceptional context, where all our social, economic, and cultural references have become blurred, people increasingly need and search for words of wisdom and appeasement from, among others, “professionals” of religion. In Turkish Islam, there are many such guides for the Muslim people. I shall focus here on the most representative personalities and entities of the religious landscape.

The most powerful and extensive Islamic organisation in the country is the Diyanet, i.e. the Directorate of Religious Affairs, which reports directly to the President of the Republic, a status that is strongly emphasised on its website. Functioning in effect as a vast ministry with its 130,000 employees, the Diyanet manages 84,000 mosques and as such exerts a real influence on believers. A key religious player in Turkey, it manages worship and organises pilgrimages to Mecca and Medina.2 Through the voice of its thousands of imams and muezzins throughout the country, this institution gives the direction and dictates the individual and collective attitude to adopt in the face of exceptional phenomena such as epidemics and earthquakes but also certain political crises, as during the attempted coup d'état in 2016. But Turkish Islam is not limited to the Diyanet. It is also represented by a large number of Sufi brotherhoods. Among the main ones worth citing is Naqshbandiyya, founded by Bahâ’uddin Naqshband, which has a network of subsidiaries worldwide. In Turkey, there are at least three branches.3 Its most important in terms of the number of its believers is the Menzil community, named after the village of its headquarters in the province of Adiyaman. The community is currently headed by Abdulbaki Erol. Another branch of the Naqshbandiyya is headed by Osman Nuri Topbas, and revolves around the Mahmut Hudayi Vakfi foundation, headquartered in Üsküdar. Finally, the İsmailağa community, with its headquarters in the Fatih district in Istanbul, constitutes the third important group and claims to represent the spiritual legacy of Bahâ’uddin Naqshband, the founder of the order. This last branch has very good relations with President Erdoğan, who visited its premises a few months ago.4

Finally, Islam in Turkey is also represented by newspapers, television channels, and radio stations relaying the analysis of Muslim intellectuals who have a certain influence on public opinion. Among them are Abdurrahman Dilipak, who writes in the very Islamist daily Yeni Akit, Hayrettin Karaman, who is an editorialist in the newspaper Yeni Şafak which is just as fundamentalist in its thinking, and finally Ihsan Eliaçik, who embodies a new current of Turkish Islam, the anti-capitalist Islamists, or left-wing Islamists.

Each branch of Turkish Islam gives an essential place to the pandemic yet their interpretations diverge. Like fundamentalists, radicals, and orthodox of other religions, part of Turkish Islam reacted with fatalism and resignation, considering the pandemic as a divine punishment.5 Others, blinded or ignorant, denied the reality of the threat, preferring to seek refuge and protection in Islam, by reading the Quran and going to the mosque to protect themselves from the virus. Others, more extreme and more marginal, in line with the conspiracy theories so influential in Turkey, have seen COVID-19 as the work of Jews, Zionists, and other so-called enemies of Islam and Turkey.6

In Turkey, fortunately, these racist and obscurantist views are ultra-minoritarian. For the Diyanet, but also for most of the authorities of the brotherhoods and the editorialists of Islamist newspapers and magazines, the threat of the virus has been taken seriously. The attitude toward this scourge has been responsible, dictated by collective rationality and scientific precaution and justified in doctrine by two references, one dogmatic, the other historical. Indeed, the recommendations of the Diyanet, in particular the need to stay at home and avoid gatherings, including for collective prayers, have been accompanied by references to the practice of the Prophet Muhammad in the face of epidemics and to the way in which the Ottoman Empire had to deal with similar health disasters in the past.

Thus, more than ever, the Diyanet, the religious arm of political power, quickly imposed the restriction on gathering places and the introduction of new practices such as so-called barrier gestures and social distancing. So far, the banning of collective prayers in mosques until further notice has been the most important decision made by this institution. Similarly, all collective religious gatherings, like prayers and collective iftars have been banned, including pilgrimages to Mecca. The Saudi Arabian authorities have closed the holy places, probably for a fairly long time, thus jeopardising the holding of the Great Hajj, scheduled for the end of July 2020. Again in order to limit contamination, funeral practices have been simplified: shorter prayer in the presence of a restricted public and very expeditious burial. For a better dissemination of these new regulations, the Diyanet has relied on its media but especially on its thousands of imams spread throughout the country. Many imams followed its recommendations, while some had anticipated them and blamed the official institution for its lack of responsiveness. Other currents of Turkish Islam urged the faithful to be equally cautious. The main brotherhood movements have relayed the importance of respecting the barrier gestures and the rules of social distancing. 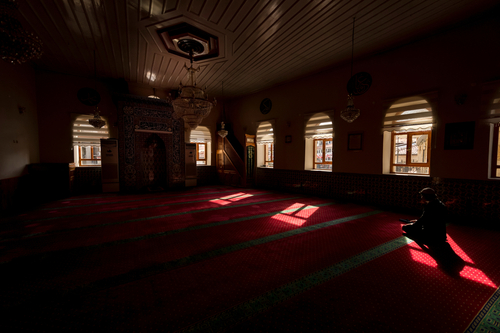 To justify the principles of sanitary isolation or quarantine, a well-known page in the history of Islam has been invoked. History records that in 638, when Caliph Omar was preparing to invade Syria and Palestine, a terrible plague epidemic devastated the Palestine region. It is referred to by Arab writers as the plague of Emmaus, after the village in which it appeared, costing the lives of more than 25,000 soldiers. Omar gathered all the military leaders in Sargh and after a long conference, the decision was made to suspend the conquest. Referring to Mohammed’s prohibition to enter a territory where there was an epidemic, Omar withdrew the army from all infected areas despite strong opposition from Abu Oubayda, commander-in-chief of the troops. Also, one of the hadiths of the Prophet states: "If you learn that an epidemic is devastating a region, do not go there, and if you are in a region affected by an epidemic, do not leave it.”7 Omar’s decision, known as the avoidance decision, is crucial because even today, it is the conduct recommended by religious authorities to fight the spread of the virus.8

To convince the Turkish people to stay home, the authorities have not hesitated to rely on a more recent history and to use the factor of Turkish-Ottoman identity. They have indeed reminded people that confinement was already used during the Ottoman period. Many articles have been published in the media on Sultan Mahmut II.9 He was not only a great reformer pioneer of the era of grand reforms called Tanzimat. He was also the sovereign who allowed for the development of the Ottoman Empire thanks to his public health policy and his fight against epidemics. Indeed, it was under his reign, in 1838, that Şeyhülislam Asım Efendi, the highest Islamic authority of the Empire, issued a fatwa for the establishment of a Meclis-i Tahaffuz-i Âli (Supreme Council of Quarantine).10 Among other functions, this council supervised the hygiene rules that needed to be followed during pilgrimage to Mecca but also and above all it confirmed the state’s right to limit the population’s free movement and free business in the case of an outbreak of plague, cholera, or any other virus.

The reference to history and traditions, be they religious or national, has allowed the Turkish authorities to legitimise confinement and quarantine, two measures that are generally well accepted by the population. These measures continue to be upheld during Ramadan. This month of celebrations and festivities, which started on 24 April, is unprecedented, since collective prayers that normally occur just after iftar, called taravih, are not taking place. The great pilgrimage to Mecca and Medina will also probably be disrupted, if not suspended. The way believers are experiencing these two essential moments in the Muslim calendar is a real test for civicism, cohesion, and solidarity among the Turkish Muslim community.

In Turkey, as everywhere else, the pandemic caught the state and the population by surprise. Despite this, major decisions were quickly made (recourse to quarantine and lockdown). Many voices reminded the people that human destiny is fraught with large-scale health disasters. However, the discrepancy between our ultra-technological and scientific century and these old methods reveal our lack of mobilisation in favour of the common good, which should raise a question which should demand an answer from the religious leaders, whose role is to adapt to the rules of nature and help the faithful to be best prepared.

Access the full resources page dedicated to the issue here.