The COVID-19 crisis has brought to the forefront of public debate the essential issue of solidarity between member states within the European Union (EU). At the first symptoms of the pandemic in early 2020, EU member states turned to national solutions first as a reflex. Health issues have indeed never been part of the legal competences of the EU. National lockdown plans were set up without any real European harmonisation.

While Italy, France, and the Czech Republic ordered generalised confinement measures with controlled mobility between 9 and 16 March 2020, the Netherlands and Sweden called for a strategy of collective “herd” immunity based on simple self-discipline by citizens. The Dutch abandoned this approach quickly enough to move on to what they called “intelligent containment”: all shops remained open and only barrier gestures were imposed. Border closures also occurred in the Schengen area without any real harmonisation. Very quickly, Germany introduced border controls with its neighbours, without however totally banning free movement. On the contrary, Poland and Austria imposed complete closures with no possibility for other Europeans to travel there. Finally, several EU member states have refused to deliver medical equipment to other EU member states. Faced with a shortage of masks, Germany and France decided to requisition them on national territory and ban all exports. Similarly, fierce competition for the import of masks from China developed at the beginning of the pandemic.

A few incidents relating to the hijacking of shipments of Chinese masks in airports have given rise to media communication pointing to the lack of European solidarity and a policy of every man for himself. Former French Prime Minister Manuel Valls spoke of a European Union that “can die for lack of solidarity.”1 National self-interests have inevitably fuelled the rhetoric of the opponents of European integration. Luigi Di Maio, Italy’s Foreign Minister, a member of the Five Stars Party, did not hesitate to point out China’s generous and effective aid to Italy, adding “we will remember the countries that have been close to us.”2 The Chinese government took advantage of these favourable voices to launch an intense public diplomacy offensive toward European public opinion, gaining a strong echo in countries such as Greece and Italy, but also in the countries of Central Europe and the Balkans. In particular, the coordinator of the crisis units in Lombardy declared: “Let us adopt the Wuhan model to fight the disease.”3 EU High Representative for Foreign and Security Policy Josep Borrell spoke of a “battle of narratives” and had several reports drawn up within the European External Action Service in May 2020 pointing to “fake news” about COVID-19 in Europe coming not only from China, but also from Russia.4

European Solidarity Despite Everything

In the eyes of public opinions, the lack of cooperation between Europeans has obscured the fact that the EU member states have in fact never ceased to dialogue and cooperate on health matters. Following a decision of the European Council, the European Commission launched a “European roadmap” on 26 March 2020, containing a number of recommendations to the member states. Medical masks (where available) have been sent by some member states to their neighbours, for example from Italy to France. Patients suffering from COVID-19 were admitted to intensive care units in other EU countries. German hospitals, for example, with vacant beds and ventilators, have taken in some 200 Italian and French patients. Similarly, French hospitals in the south of the country took in patients from northern Italy, a region that was particularly affected, from the very beginning of the pandemic. These demonstrations of solidarity in terms of health issues were given very little media coverage and failed to convince public opinion that the EU was indeed acting. In Italy, the crisis caused by the pandemic confirmed the decline in public support for Europe that the issue of refugee intake had already triggered. In April 2020, the opinion poll institute SWG stated that only 27% of Italians had a favourable opinion of the EU.5 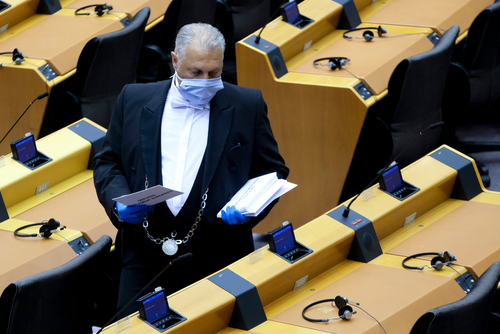 From Dealing with a Health Crisis to Anticipating an Economic Crisis

The real debate on European Solidarity began around the issue of the impact of confinement measures on the EU’s economic activities. Faced with the negative effect of confinement on state budgets, obliged to finance companies in a state of insolvency and partial unemployment measures, nine heads of state and government (Belgium, Spain, France, Greece, Ireland, Italy, Luxembourg, Portugal, and Slovenia) sent a letter to President of the European Council, Charles Michel, at the end of March 2020. They called for the raising of a European loan based on the share of debts. This idea of “Coronabonds” clearly contradicted the German doctrine of refusing any debt sharing between member states. This position was traditionally supported by several northern countries, including the Netherlands, Austria, Denmark, and Sweden, which sometimes took an even stricter approach. Nevertheless, faced with fears of a serious economic crisis, particularly in Italy, the 27 voted to lift the constraints imposed by the Stability Pact on national public finances and decided within the Eurogroup on a first package of aid to member states amounting to 540 billion euros , on 9 April 2020. To this lifeline the European Central Bank added the buying back of sovereign debt, as it had done during the previous crisis in the euro zone (between 2009 and 2015). Southern countries hit hard by the pandemic, particularly Italy and Spain, joined France (which thus became a “leader” of Southern countries) in order to demand more from Northern countries. They were met with a front of refusal from the Northern states, described as “frugal” (Austria, Denmark, the Netherlands, and Sweden) and supported by most of the Visegrad Group (Hungary, Poland, Czech Republic, and Slovakia) as well as by the three Baltic states (Estonia, Latvia, and Lithuania). 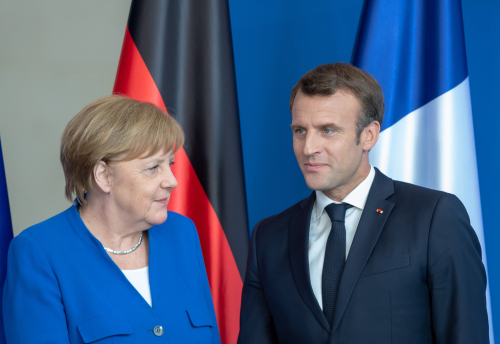 The German Decision: A Tipping Point

Pending for several weeks, however, Germany finally decided to join a plan of grants and loans financed by state borrowing, through a Franco-German Initiative in May 2020. This is a real turnaround from the traditional doctrine of ordo-liberalism, which was not a foregone conclusion. The Chancellor’s political choice can be explained first and foremost by the desire of German industry not to face a major crisis in the euro zone, particularly in the two key economies that are Italy and France. Angela Merkel’s decision was made against a large part of German public opinion, both within the Chancellor’s own political party (the CDU/CSU) and among judges of the German Constitutional Court. On 5 May 2020, the judges of the German Constitutional Court ruled against the European Central Bank’s repurchase of public debt from the states, thereby setting limits on the powers of the European Court of Justice.

When Angela Merkel made the political choice to endorse European financial solidarity against the German doctrine of refusing to share debts, the so-called “frugal” countries of Northern Europe were immediately led to soften their resistance. In fact, these countries are too economically and politically dependent on Germany (the Austrian and Dutch Prime Ministers are both Christian Democrats) to stand firmly against Chancellor Merkel.

However, it will take some time to implement a final decision leading to the disbursement of aid. It could not be agreed at the European Council of 19 June 2020 and will require a further meeting of the heads of state and government on 17 July 2020, the outcome of which no one can predict. The European recovery plans have taken the wind out of the sails of all those who denounced the cold selfishness of the EU, and even more so of rich and powerful Germany.

The Franco-German Initiative of May 2020 also includes a French-inspired call for the EU’s strategic independence, stating that the production of essential goods, such as masks or respirators, should no longer escape Europe entirely in the event of a crisis. Germany’s rallying to this idea of European industrial champions was once again not self-evident, so much so that the very notion of industrial policy has long escaped the economic frame of reference across the Rhine. But it is however true that global industrial competition had already shifted the lines a year ago, as shown in February 2019 by the report of Economics Minister Peter Altmaier calling for a national industrial strategy for 2030 to withstand external competition (i.e. mainly China).

The Debate on Conditionality Will Also Be Political

In a debate that is far from being over, the politicisation of the European Recovery Plan will from now on certainly focus on the conditions for implementing the aid. Southern European countries do not want to hear about strict macroeconomic conditionality based on austerity policies similar to those applied to Greece or Portugal from 2009 to 2015. In Italy, Mateo Salvini’s Lega has even made the theme of rejecting conditionality in the name of national sovereignty a slogan. Similarly, in France Jean-Luc Mélenchon raised the issue in his speeches. The countries of Northern Europe, for their part, will not fail to demand a form of conditionality. But will this be equivalent to the measures imposed by the Troika during the three aid plans for Greece? It is likely to be more like a form of positive conditionality, whereby EU funds will only be allocated to projects that are technologically innovative, compatible with environmental protection, or favourable to the digital economy, where a gap still needs to be filled.

At the same time, this question of conditionality has revived internal debates in some member states. In Italy, governor of Veneto Luca Zaia pointed out that European aid should go to the north of Italy, which suffered more from the pandemic than the Mezzogiorno, reviving the anti-southern regionalist ideology that Salvini had chosen to give up in order to make the Lega a national party.

The EU budget perspectives for the 2021-2027 period will reinforce the geographical cleavages between member states: north/south, but also east/west. The Central and Eastern European states, less affected by the COVID-19 crisis, fear a southward shift in budgetary priorities to the detriment of the structural funds that have been fuelling their infrastructure spending since accession. If we add to this the debate within the European institutions aimed at linking the allocation of funds more closely to respect for the rule of law, it is not surprising that states such as Hungary and Poland, led by Eurosceptic governments, are expressing concern.

Although the COVID-19 crisis has reopened the debate on European solidarity, it has not definitively disrupted the destination of transfers, which remains subject to intense intergovernmental bargaining. The issue that the Germans call “the Transfers Union” has become a driving force for Euroscepticism. In the south, it is used to denounce the hegemony of the “rich” in the north who are deemed to behave selfishly. In the north and the east, it is used to condemn the profiteering spirit of the countries of the south who supposedly want to benefit from financial solidarity without making the slightest effort to reform their public finances and change lifestyles that are reputedly frivolous. The European citizenship that would result from an assumed solidarity between peoples at the EU level is still far from having proved its reality and its legitimacy in the eyes of Europeans themselves.

Access the full Dossier on the COVID, in French and in English

Access the CERI Resources on the European Union here.