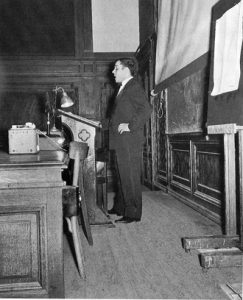 It is difficult to talk about Yves Klein free from the cult surrounding him. That, however, is what three observers who are attentive of this “salesman of the void”’s connections with economic issues have tried to do. Klein had received this epithet in 1960 from a Tribune de Lausanne journalist who failed to see to what extent Klein thought instead in terms of the “plenum.” In reintroducing the medieval notion of the “just price,” the artist was not just playing at the role of a scholar. He was taking charge of the economic system surrounding his work, with a desire to control all its terms as well as everything else.

The Just Price for a Work of Art According to Yves Klein:
'Sketch and Broad Lines' of an Economic System

Throughout his career, Yves Klein, if one is to go by what he said, was “in search of the real value of the picture.”[ref]“L’aventure monochrome” (1959), Yves Klein, Le dépassement de la problématique de l’art et autres écrits (Paris: École nationale supérieure des beaux-arts, 2003), p. 235, translated in Yves Klein, 1928-1962: Selected Writings, trans. Barbara Wright ([London]: Tate Gallery, 1974), p. 105.[/ref] The term “value” suggests here not only the vivid hue–the much-talked about IKB blue–or the artistic merit of the work, but also its commercial value, its exchange value. From one exhibition to the next, from speculative speeches to artistic innovations, his career was marked by the ceaseless quest for the “just price,” the price that could do justice to the artistic merit of the work, take the work to market without subjecting it to the market’s contingency and arbitrariness, and offer it for exchange without lowering it to the level of mere merchandise.
Through the example of three exhibitions (Milan, 1957, London, 1957, and Antwerp, 1959), we shall retrace the development of Klein’s reflections on the problem of pricing and the stages that led him, in 1959, to propose the “Sketch”[ref]“Esquisse et grandes lignes du système économique de la révolution bleue” (1959), ibid., p. 99-101, translated as “Sketch and Broad Outlines of the Economic System of the Blue Revolution,” Yves Klein, 1928-1962: Selected Writings, p. 100.[/ref] for a new “economic system” that would be more apt to fulfill its evaluative role.

Klein at the Apollinaire Gallery: Intrinsic Value and Just Price

On January 2, 1957, at the Apollinaire Gallery in Milan, Klein inaugurated an exhibition of eleven of his works. They were all completely identical: monochromes of the same size, painted with a roller using the same ultramarine blue. Now, according to the fable concocted by Klein, these canvases were to be displayed and sold, each at a different price. This anecdote is fictional: several articles at the time mention a single price of 25,000 lire per picture.[ref]That there was but a single price is confirmed by several articles we have been allowed to consult in the artist’s press books: Dino Buzzati, “Blu, Blu, Blu!,” Corriere d’informazione, January 9, 1957; “Che coraggio blu!,” Corriere Lombard ; “Nur für Kenner: Die Vollendung des Abstrakten!” Neue Illustriert, January 26, 1957; L’Espoir de Nice et du Sud-Ouest, January 26, 1957 (Yves Klein Archives, Press Books 1 and H).[/ref] What lessons may nevertheless to be drawn from this “didactic fable”?[ref]Denys Riout, “Imprégnations: scénarios et scénographies,” Yves Klein, Corps, couleur, immatériel (exhibition catalogue) (Paris: Centre Pompidou, 2003), p. 45; Denys Riout, Yves Klein, L’aventure monochrome (Paris: Découverte Gallimard, 2006), p. 50.[/ref] The first lesson is stated by Klein himself: “the pictorial quality of each picture was perceptible through something other than the material physical appearance.”[ref]“Conférence à la Sorbonne” (1959), Le dépassement . . . , p. 134, translated in Yves Klein, 1928-1962: Selected Writings, p. 105.[/ref] Is this to say that its value would be independent of the picture itself? No; recognition of the insufficiency of appearance as a way of justifying differences in quality does not lead Klein to some sort of relativism, to an affirmation of the subjective nature of value or its dependence on an institutional context. While value is invisible, it is no less lodged at the very heart of the object, in its concrete materiality.
Klein thus aims at reintroducing the medieval notion of the “just price”: there would exist a divine order of values, to which price, a human instrument of exchange, has to conform.[ref]We are presenting here the economic views of the canonists. The landscape of the economic thought of the Middle Ages is in reality more complex. See Jean Ibanès, La doctrine de l’Église et les réalités économiques au XIIIe siècle (Paris: Presses Universitaires de France, 1967), p. 35ff, and Giacomo Todeschini, Richesse franciscaine, de la pauvreté volontaire à la société de marché (2004; Paris: Verdier, 2008), chap. 3, pp. 143-210.[/ref] Value is therefore intrinsic, and price derivative: according to the economist Alfred de Tarde, the idea of the “just price” implies that “price and value are the same thing”; “they are incorporated into the object; they cannot rise or fall without the object changing physically.”[ref]Alfred de Tarde, L’idée du Juste Prix (1907; New York: Burt Franklin, 1971), p. 36. [/ref] Contrary to the contingent market price, the just price is therefore objective and normative.
When he claimed to impose different prices on apparently identical canvases, Klein was choosing, despite the rules of the market, to assign a price that reflected the real value of works, which he alone was worthy of judging. This is a power that, for want of having it really in his possession, he could at least grant himself in his fable.

Klein at Gallery One: Value and Market Price

A few months after the Milan exhibition, in the Summer of 1957, Klein showed his work in London at Gallery One. The critical reception for this show marks a new stage in Klein’s reflection on pricing. Indeed, with very few exceptions, all articles about the show concentrate their criticisms on this issue. What was found to be shocking was not so much that these works of art might exist but that they might really be sold, and therefore bought by someone. The mention of prices is almost systematic and is often found in an article’s title or subtitle, highlighted by the typography.[ref]See the articles contained in the Yves Klein Archives, Press Book 2.[/ref] The prices mentioned in the articles are, moreover, almost always fanciful.[ref]Price list of works exhibited at Gallery One, Yves Klein Archives, Press Book 2.[/ref] What really mattered was not so much the exact amount of the price as how huge it was in relation to the supposed value of the works, or even the existence of any price at all.
Now, it seems that the artist himself would have been, to a certain extent, the cause of this reaction. Indeed, a document offered to Gallery One visitors provides some details about the artist’s previously concluded sales, as well as the prices for such sales. “Concrete evidence that Klein’s painting is regarded seriously,” the text explains, “is that he is able to make a living at it.”[ref]Typed document, Yves Klein Archives, Press Book 2.[/ref] The strategy is almost naive in its obviousness: sales guarantee his seriousness, his good faith, his quality.

Klein in Antwerp: Elaboration of a New “Economic System”

For Klein, price is therefore not simply of secondary importance, the resultant of intrinsic value. Qua crystallization of the act of exchange, it is of capital importance for the work to happen at all, for it to be recognized qua work. Between the Milan exhibition and the London one, the development of immaterial art deepened this reflection: sales became the sole manifestation of the work.
A problem is thus posed: If price reflects value, the price of an inestimable work ought to be out of reach for purchasing. But the act of selling is key to the work’s validation qua work, to its very existence. This contradiction came to the fore during a 1959 group show in Antwerp. For the first time, Klein refused to sell an immaterial work for money, asking for “a kilo of pure gold” in exchange. Stéphane Mallarmé had already written in 1889 that “wanting to assign its real price, in monetary terms, to a work of art is to insult it,” which is something Klein very well understood during his London show. [ref]July 8, 1889 Letter to Octave Mirbeau, in Octave Mirbeau, Combats Esthétiques (Paris: Séguier, 1993), p. 390.[/ref] The sole possible solution then was to renounce monetary exchange, which devalues the work by giving it a banal money price, in favor of a form of bartering that allows the exchange to take place while still preserving the work’s purity.
This is what Klein theorizes in his text “Sketch and Broad Outlines of the Economic System of the Blue Revolution,” a veritable manifesto for a utopian economic system in which exchange would rediscover its true value.[ref]See note 2, above.[/ref] At a historical moment when the very notion of a monetary standard was disappearing from the world economy, allowing currencies instead to float, Klein “challenge[d] reserves and currencies,” proposing a new standard for exchange: the work of art, which would come to replace gold in the vaults of the Central Bank. In this system, works would have no price, since they would be the measure of all prices; they would be at the heart of each exchange without ever being handed over to the vagaries of the market. The monogold entitled Valeur or (Gold value) remains like a trace of this utopia, which consists in shielding art from economic contingencies in order to make it into the standard, the measure, the absolute for all value and all exchange.

Sophie Cras received a Master’s degree in Finance at the French Institute of Political Sciences in 2008 as well as a Master’s degree in Art History there in 2009. She is currently a doctoral student with a stipend in the history of art at the University of Paris-I. She is also pursuing a degree at the École Normale Supérieure on the rue d’Ulm in Paris, in the Department of History and Theory of the Arts.