The major renovation of the 1930s

By 1923, the École libre des sciences politiques was bursting at the seams, a victim of its own success. Attended by some 2,000 students in the early 1930s, the School was crammed into premises designed to accommodate 350. The main lecture hall —the pride of the 1890s—was far too small to fit the crowd that flocked to André Siegfried’s lectures. In 1933, the young registrar of the École libre des sciences politiques, René Seydoux, convinced the venerable director Eugène d’Eichthal to launch major renovations. The new lecture hall wing was built over the garden at 29 rue Saint-Guillaume in record time.

The lecture hall wing was cleverly designed to maximise space, light and ventilation. The new building solved the overcrowding problem by adding two lecture halls of 500 and 300 seats, two large classrooms and a gym. The old library housed in a neighbouring wing doubled in volume by taking over the remains of the now redundant former lecture hall. Whereas the old library had been windowless and gas-lit, the new wing, although north-facing, was equipped with wide windows, bathing the new lecture halls in natural light. To compensate for reducing the width of the garden over which it was built, the new wing was designed in a pyramid shape, with setbacks at each floor so as not to deprive the garden of sunlight. 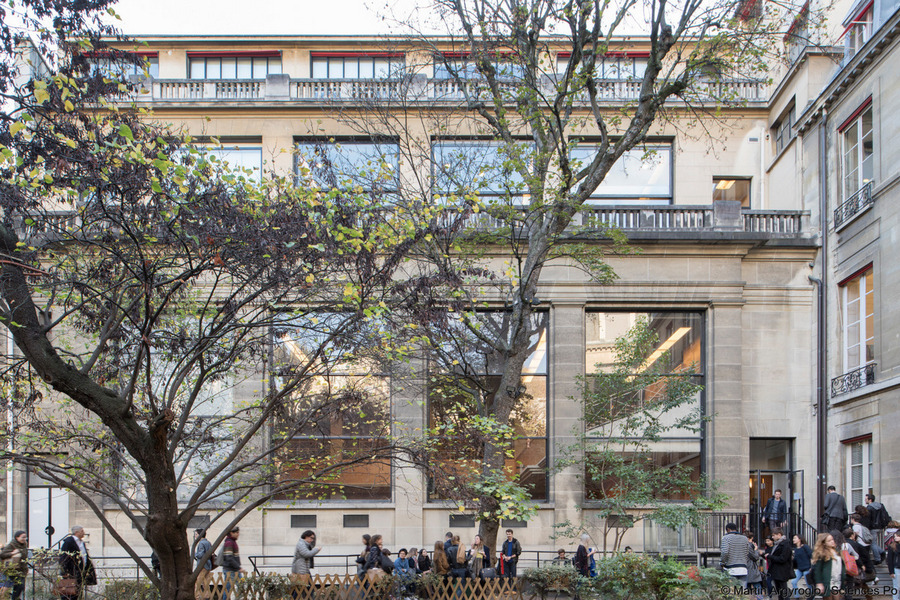 In the lecture hall itself, special attention was paid to heating and ventilation. Large blowers were installed in the basement to provide ventilation through numerous air vents covered with Art Deco grates in the floor and along the walls. The layout features a sloping floor and a mezzanine balcony to ensure students have a very good view. The walls were covered with a rubber surface to provide excellent acoustics. 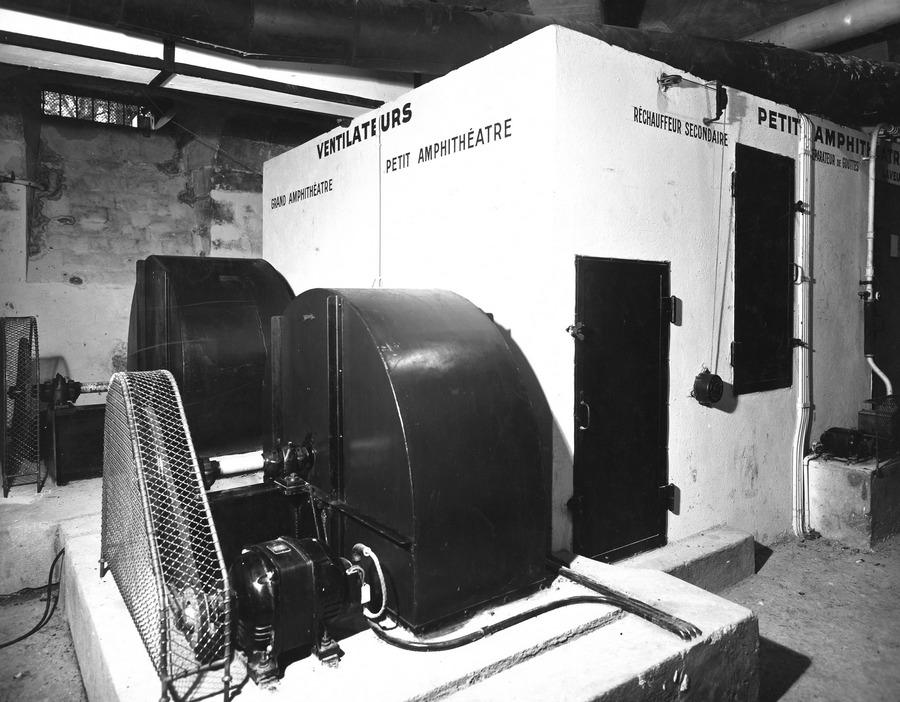 For seating, the School called on Jean Prouvé. His workshops designed two-seater desks with oak seats and writing surface, connected to each other by a central frame made of folded sheet metal. This material is the hallmark of the Nancy designer, whose credo “ergonomics, economy, solidity” is amply fulfilled in Boutmy.

The prestigious lecture hall has remained intact since the 1930s, except for the stage furniture, updated so the rostrum can be cleared if necessary, and the large blackboard, replaced by digital screens. The balcony has also been upgraded to meet safety standards. 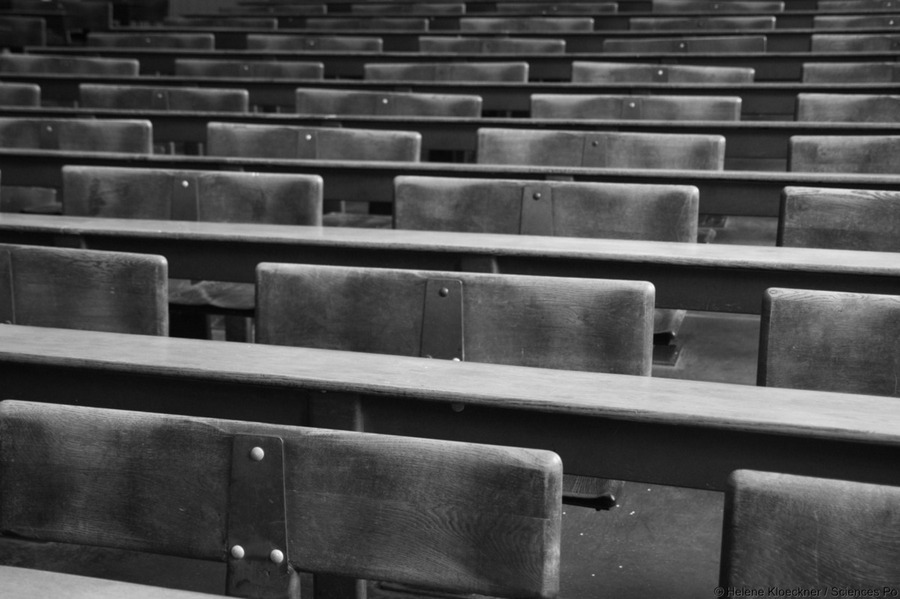 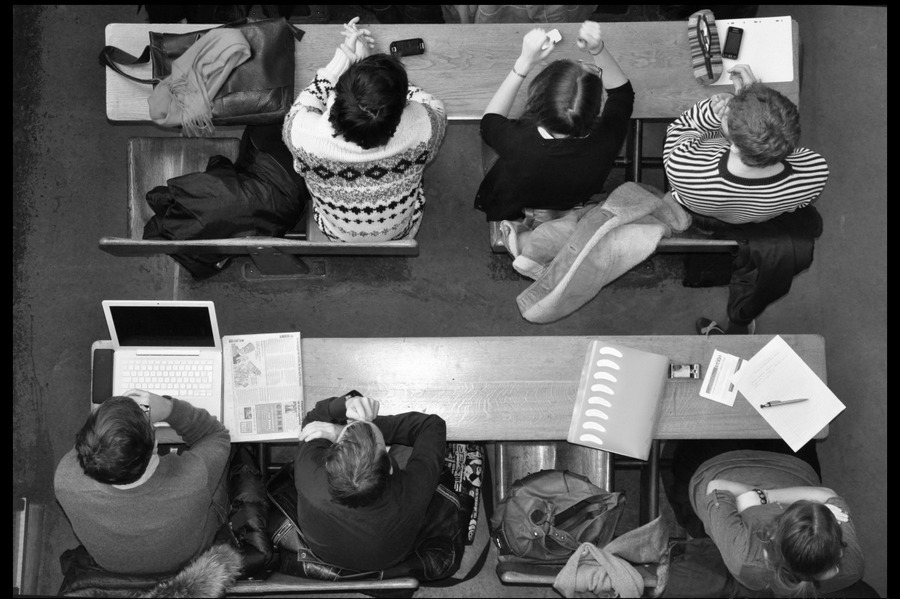 The classrooms and lecture halls of the new wing were named after the first directors and professors of the École libre, in homage to the pioneers of the institutional saga. Naturally, the main lecture hall was named in honour of Émile Boutmy. As the founding father of the École libre, Boutmy devised its intellectual vision and developed the curriculum in 1871-72. A talented administrator, Boutmy managed to raise the funds necessary to establish his School and the donations needed to acquire 27 Rue Saint-Guillaume (1879). He was also an astute negotiator and protected his Faculty from the state’s desire to nationalise (1876-81). Above all, he was passionate about education and pedagogy, and established his institution as a permanent fixture of the French higher education landscape.

The second floor lecture hall was named after Anatole Leroy-Beaulieu, Boutmy’s successor in 1906—a tribute to his mastery of Russian and Eastern affairs and to his commitment to countering the “doctrines of hate” (antisemitism, anti-protestantism, anticlericalism).

The third floor classrooms honoured the memory of two pioneering professors of diplomatic history, Albert Sorel and Albert Vandal. The gym housed in the basement took the name of its promoter, René Seydoux, who was also the project manager for the construction work.

Architect of the Midi railway company and the Blériot factories in Suresnes, Henri Martin and his son Hubert were appreciated by registrar René Seydoux (1929-1936) and director Jacques Chapsal (1945-1979) as “serious, dedicated architects, who supervised their contractors well, did not seek to impose the latest recipes of modern architecture at all costs, but knew how to propose them and use them properly” (Chapsal).

In 1934, they built the lecture hall wing with its pyramid shape and bay windows, and equipped it with an ingenious heating and ventilation system. In the same year, they fitted out the main hall nicknamed La Péniche, “somewhat massive, a testament to the architecture of the time (that of the colonial exhibition and the Palais d’Iéna)” (Chapsal).  In 1952, they raised and aligned the buildings from 23 to 29 Rue Saint-Guillaume, unifying them behind the same facade with its three arched doors. In 1963, they delivered the modern building at 30 Rue Saint-Guillaume, which houses the library. They also designed 56, Saints-Pères in 1979.

For seven weeks, from 14 May to 29 June 1968, a group of students occupied Sciences Po. The occupation was motivated by the students’ refusal to take the end-of-year exams, their desire to be part of “the struggle” alongside other universities, and their aim to be involved in the School’s governance and constitute a “student power”.

The Boutmy lecture hall, renamed “Che Guevara”, found itself in the heart of the new “Lenin Institute” and hosted the General Assemblies and daily meetings of the Student Council.

The venue for major lectures

The Boutmy lecture hall has always hosted prestigious professors and guest speakers. All major conferences, election evenings and inaugural lectures are held in Boutmy. From Robert Badinter, Kofi Annan, and Boutros Boutros-Ghali to Karl Lagerfeld, Dany Laferrière, Condoleezza Rice, Michel Serre, and Justin Trudeau, many notable figures from politics, business, the arts and the media have captivated the room and inspired generations of students.

Boutmy’s stage also reveals our students’ many talents when they take it over for speech competitions, theatrical performances and even wild musical comedies!