Sharon Weill, Kim Thuy Seelinger and Kerstin Bree Carlson have edited a book about the trial in Senegal of Chadian former president Hissene Habré for crimes against humanity, war crimes and torture. The book, entitled The President on Trial: Prosecuting Hissène Habré and published by Oxford University Press in May 2020 is a socio-legal study of the pursuit of Hissene Habré, which began when he left power in 1990 and concluded with the trial judgment in 2017. By taking the pursuit of Habré as its subject, and by building the narration through the experience of a wide spectrum of actors implicated in this process, the book contributes methodologically to the study of global justice by showcasing how actors are integral to how we understand a process. Interview with Sharon Weill.

Why is this trial important? What is the significance of this trial happening in Africa?

Sharon Weill: By some accounts, the trial and conviction of Hissène Habré in 2015-2016 is the most significant achievement global criminal justice has enjoyed in the past decade. Simply creating a court and commencing a trial against a deposed head of state was an extraordinary and arguably unlikely success. The ad hoc tribunal set up in Senegal exceeded expectations, working on time, within budget, with no murdered witnesses or self-dealing officials. The trial judgment found Habré guilty of war crimes, crimes against humanity, and torture—including several counts involving sexual violence committed by Habré’s agents and Habré himself. The 2017 appeal’s judgment affirmed the conviction on all counts except for Habré’s personal commission of rape, which was dismissed for procedural reasons, and affirmed Habré’s life sentence. Despite fears that sympathetic African heads of state might push for his pardon, Habré remains, to this day, imprisoned in a dusty location at the southern tip of Dakar’s peninsula.

The judicial achievement of the tribunal is particularly meaningful in the current period, in which we are witnessing a “backlash” against international criminal justice, particularly in Africa. The African Union is constantly threatening withdrawal from the International Criminal Court (ICC), and Burundi has already withdrawn. There is a big difference with the optimistic days of the first ad hoc tribunals for Rwanda and the former Yugoslavia, built on the template of the Nuremberg and Tokyo tribunals and seeking the same normative and political reordering that those institutions heralded.

In the place of international criminal justice, many are advocating for cheaper, more local alternatives. In this case, the tribunal that tried Habre was a local/international hybrid court with extensive African control. It was put together at the behest of the African Union, and showcased how well African justice can function. The creation and work of the tribunal challenged the regular north/south dynamic of global justice, by creating a new paradigm of cooperation where local expertise and international perspective and resources worked in concert. The tribunal applied international criminal law and Senegalese legal procedure, creating a novel judicial experiment.

You edited a book of first-person accounts from actors in and around the trial. Why did you choose this method of examining the trial? What do you think it gives you, and are there any downsides?

The book presents the Habré trial and its impact using a novel structure of first person accounts and academic analysis.

As editors, we followed the case from 2015 onwards. We made several trips to Dakar, some taken alone, some together and some with students, in order to interview a spectrum of actors associated with the tribunal. We began with the driving idea that the richness, professionalism and critical inquiry that we saw all around us in Dakar should be shared. We wanted to make this empirical source material widely available and we thought the best way to do it was to preserve the actors’ direct testimonies. This is why we selected this method.

The first part of the book consists exclusively in 26 chapters written by Senegalese, Chadian, and foreign experts who were directly involved in facilitating and operationalizing the Habré trial. These chapters tell the story of the trial in its chronological order, beginning with the 1990 regime change in Chad. Our contributors include judges, lawyers, administrators, victims’ representatives, politicians, media and civil society leaders central to this case. These chapters are drawn from across the echelons of power, ideology, and status, including international judges and bureaucratic workers. We also included the trial and appeals decision as an actor; those chapters are written by a legal advisor who worked on the case. 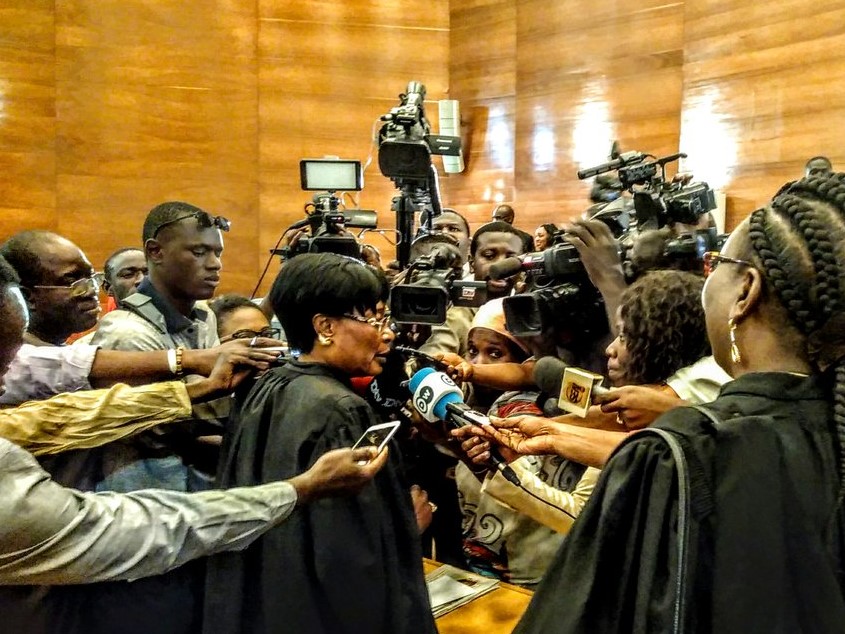 Our aim was to construct the narrative of this long process through these accounts. We tried to preserve the contributors’ voices as we first heard them in our on-field interviews. We believe that the richness of the empirical sources and their perspectives adds to an understanding of law in action and the particular circumstances of this tribunal. At the same time, the process of writing is necessarily transformative. People do not write as they speak, personality often does not translate into text, anecdotes disappear, and stories told ‘off the record’ cannot be shared.

Chance and timing also had some impact: administrators are busy, politicians feel more or less secure, and activists have sometimes moved on to the next engagement. Nonetheless, we believe this book presents much of what was essential about the institution and how multiple persons and interests interacted in this process. It is our hope that readers will use this data to stimulate their own theorization and further inquiry.

You also include academic chapters (commentary and contextualization) in the second part of the book – why did you choose to do this?

In the second part of the book we situate the Habré case in its larger context. Many proponents of international criminal law and transitional justice ask what impact the tribunal’s design and jurisprudence can have for other prosecutions of international crimes. Should this model be replicated? Can it be? What can we learn from this tribunal’s work to design and strengthen future institutions? We wanted to explore those questions in the second part of the book , which is comprised of 17 chapters written by scholars and legal experts. This part presents paradigmatic samples of the theoretical and practice-oriented discussions accompanying the Habré trial. We approached scholars mainly within the legal discipline based on the themes we found central to the case: procedural hybridity; international criminal law doctrine; victim and witness participation; and the future of international criminal justice and its challenges.

For more info and reviews: