Behind the Scenes of 'Natural Disasters'. An interview with Sandrine Revet

Can you explain to us why you use quotation marks for the adjective "natural," when you refer to this type of disaster?

These quotation marks reflect a change in the way so-called “natural” disasters are considered. For a long time, the latter were analysed by focusing on the phenomenon that caused them. This is because the earth and climate sciences have long dominated the study of these events. Hurricanes, earthquakes, floods, volcanic eruptions or heat waves constitute natural phenomena indeed, but since the 1970s, and even more strikingly since the 1990s, the social sciences have sought to show the importance of the social, political, economic and historical factors that increase the vulnerability of societies struck by such phenomena. The same phenomenon affecting societies with different vulnerabilities and capacities will not have the same effects. In some cases, it can produce a disaster—in the sense that society is unable to cope with the event—, in other cases, however, the affected society manages to cope with this phenomenon, to minimize the damage and the number of victims. As a result, these disasters can no longer be considered as “natural.” Their social, economic and political dimensions must be highlighted in order to allow for better prevention. I use this emic formulation in my work, which comes from the actors I study.

The emic approach focuses on how people think about and describe the social or different phenomena. It uses the categorizations that are specific to the groups it studies, rather than the scientific or external categorizations, which are “etic,” so to say.


This book presents what you call disasterland—the “social world” of “natural” disasters— behind the scenes. Can you tell us why you call this environment a social world and briefly describe what constitutes it?

In the book I co-edited with my colleague Julien Langumier (Governing Disasters, Palgrave Macmillan, 2015), we analysed how, when a disaster struck a society, the inhabitants were faced with already existing dispositifs that enabled them to face it, i.e. to anticipate it, take charge of it, and in the longer term to recount it, commemorate it, etc.
In Disasterland, I decided to take an interest in the manufacture of these dispositifs. I discovered a heterogeneous assemblage of people, tools, ways of thinking about disasters, who were trying to make something common at the international level. The notion of “social world”, borrowed from interactionist sociology, seemed to me to be useful in describing what I was observing. In his book The Worlds of Art, Howard Becker shows all the efforts made by actors to define what is and is not art, to draw boundaries and produce a world.

Similarly, in his survey of international aid professionals and his book Adventures in Aidland (2011), anthropologist David Mosse testifies to the “hard work” of producing something that is common, shared, from divergent approaches. In my survey, I was able to constantly observe these same ways of making something common based on “frictions” (Tsing, 2005). The world of disasters seemed to me to be the result of the constant work of thousands of professionals around the world, who have very different visions of what a disaster can be and what it takes to deal with it. My book focuses on this work. To define itself, the world of “natural” disasters must develop external borders, at the crossroads of other worlds (development, humanitarian, global health, environment, etc.); and internally, it tries to reduce the friction that arises between different ways of seeing disasters.

The anthropology of disasters has long focused on how people affected by disasters explained what had happened and attributed causes and responsibilities. However, it seemed to me that the practices of professional actors involved in risk prevention and “natural” disaster management also informed us about the different explanatory frameworks that these professionals mobilized to give meaning to the disasters they have to face. My book therefore tightens the focus on professionals working in the field of “natural” disasters and on how they analyse, interpret and understand these events. These professionals refer to at least two main explanatory frameworks: that of preparation and that of resilience. Interpreting disasters as unavoidable phenomena outside society that disrupt its normal functioning leads to the implementation of measures based on the idea of “preparedness,” which includes both predicting the occurrence of natural phenomena, devising alert systems and preparing to act in an emergency. The “expert” actors play a major role in this framework.

If, on the other hand, we consider a disaster as a shock from which we must recover before the next occurrence, in a cyclical vision of crises, then it is thought of as routine and endogenous, i.e. partly caused by society itself. The measures to be taken, therefore, are to “bounce back” or “adapt” to these events and the disaster leads either to a transformation of the development patterns of the affected society that engages the “communities” or, on the contrary, to a transformation by individuals.

Is it possible to compare these disaster professionals with other categories of professionals as studied by CERI researchers, for example—I am thinking in particular of security professionals (Didier Bigo)?

These professionals of “natural” disasters build their careers in the same way as many international professionals studied by political science or anthropology. In this regard, we can refer to issue 81 of the journal Critique internationale in which a Thema is devoted to this subject of international professionals. Whether they work on issues of security (Didier Bigo), transitional justice (Sandrine Lefranc), democracy (Nicolas Guilhot), humanitarian and development (David Mosse, Laëtitia Atlani-Duault), we find similar internationalization approaches, through training outside the country of origin, ways of integrating into networks, of presenting themselves as possible mediators, between the local and international (brokers) or between the national and international level (consultants). In all fields, it is a question of learning languages, negotiating knowledge and skills, in order to integrate ever larger networks and “go international.” What seems interesting to me when we look at the sociology of these professionals is to see to what extent they are all rooted in local and national realities and how these roots in turn contribute to the creation of “international” operating methods.

By choosing to take an interest in the field of these professionals, were you not afraid of running into a social world disconnected from reality?

Depending on the scale at which we are placed, we may sometimes have the impression that the international disaster professionals who produce the guidelines of good practices, agree on glossaries, negotiate very soft international agreements and spend their time travelling from conference to training courses throughout the world are indeed far from the realities of other fields, and in particular those that anthropologists are used to encounter, namely local fields and in my case, fields that are affected by disaster situations. This survey reveals that, on the one hand, we are dealing with people who move between different spheres, who “were not born international” but have become so. It also shows the importance of their local and national roots and the role they play in their thinking and their response to disasters.

On the other hand, the discourses and practices that drive this world of disasters are far from unreal and in turn produce eﬀects on how humans view disasters, victims and how relief and prevention are organized around the world. So we are far from a world of pure fiction and that is also what interests me in this world, its concrete effects on the way we understand and think about disasters when they happen.


Your book completes the loop of a work that began many years ago and which led to the publication of Anthropologie d’une catastrophe. Les coulées de boue de 1999 au Venezuela (Presses de la Sorbonne nouvelle, 2007), a book in which you were interested in “the way in which local actors—inhabitants, victims, displaced persons—encountered disaster management practices and mechanisms.” After the victims, you turned to supervisory practices. Can you describe your research path between these two books? And tell us briefly where this research “journey” could lead you to, in the coming years?

The book published in 2007 was based on my Phd thesis in Anthropology. I studied a particular disaster and how the different actors had dealt with the event. The disaster governance mechanisms (dispositifs) deployed in the field became the objects of my research. Then, through a collective work carried out since my arrival at CERI in 2009, my colleague Julien Langumier and I became interested in the forms that these dispositifs took (anticipation and preparation, production of communities, commemorations and production of memoirs). By conducting an ethnographic survey in the world of disaster professionals for my latest book Les coulisses du monde des catastrophes “naturelles,” I adopted the same type of approach as in my Phd thesis. What do people do when they are confronted to disasters? How do their practices reveal their ways of thinking, of framing? This time, I focussed on professionals.

In this international social world, unlike other areas that deal with other types of crises, the question of reparation is less central. It is therefore by shifting the focus somewhat either towards local scenes—the case of the Xynthia trial in France in 2014 and 2015—or towards other types of crises existing in the relations between humans and their environment that I am now working on this issue of reparation. I have just started a new project in Colombia, in the department of Chocó, on the Rio Atrato River, which has been severely affected by the consequences of mining and which has been granted legal personhood rights in 2016 by the Constitutional Court. This river has the right to be repaired, restored and rehabilitated now. I am interested in what the actors are doing with this dispositif and in what their individual visions of the river are.

Is COVID-19 a "Natural" Disaster? Read the interview with Sandrine Revet on the role of anthropology to understand such phenomena. 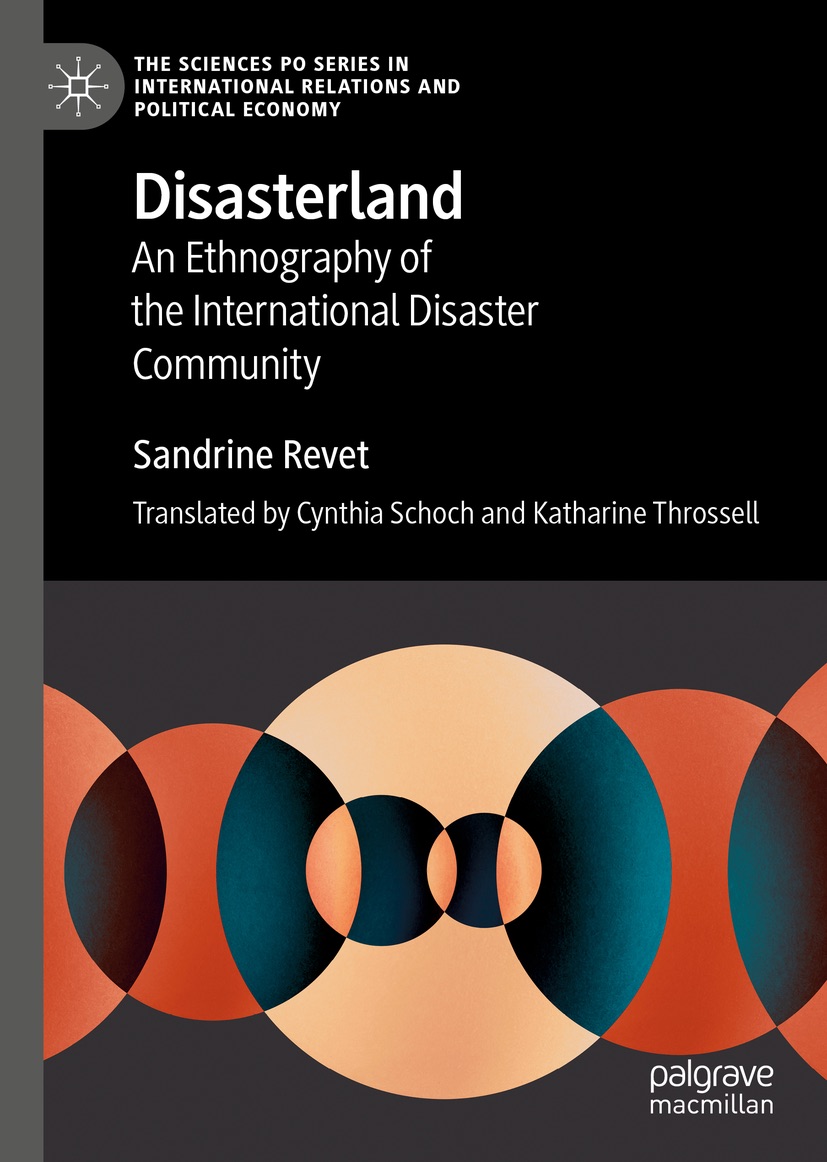