Odious debt and Hausmann-Gorky effect, from Venezuela to Belarus 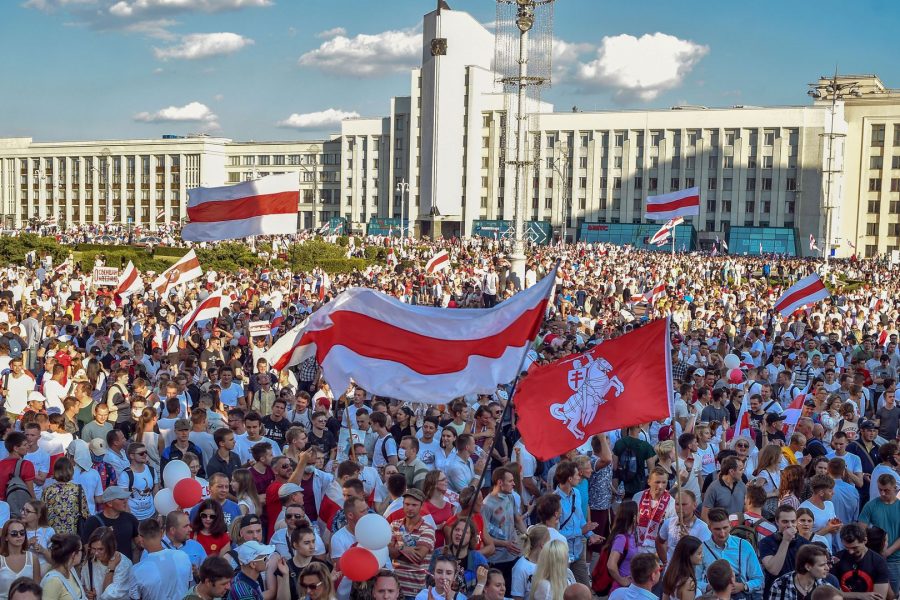 Despite intense government crackdown, the popular uprising in Belarus following an allegedly rigged presidential election in August 2020 does not seem to be fading. While President Lukashenko turned to Putin for support, the international community was left looking for solutions to lay ground for a peaceful transition, with protesters and journalists accusing the regime of beatings and arbitrary custodies by paramilitary forces.

Individual sanctions are common in such cases to target dictators and their cronies, as seen with Russian oligarchs facing US sanctions over the past few years. Sovereign debt and government financing are also a powerful yet risky lever to fight totalitarian regimes. Indeed, drying up capital flows towards the country can precipitate the end of the regime, but at the same time it risks causing import disruptions, hunger and further suffering for a people already facing oppression.

It remains a clear understanding that incumbent governments must service the debt incurred by their predecessors – the so-called “general rule of state succession”. Nonetheless, would a dictator issue debt to equip the military and conduct exactions against his own people, it would make no sense for the people to pay those debts after a democratic transition. “Odious debt” is defined as follows by Mitu Gulati, Lee Buchheit and Robert B. Thompson (2007):

“Among the purported exceptions to the general rule of state succession are what have been labelled “odious debts,” defined in the early twentieth century as debts incurred by a despotic regime that do not benefit the people bound to repay the loans. The absconding dictator is the classic example.”

Ever since the apparition of this concept, legal scholars have struggled to translate it into a concrete legal doctrine to be used in relevant cases. Indeed, such a doctrine would entail reaching a consensus at the UN (or equivalent) level on the definition of a despotic regime – regular vetoes on Syria at the UNSC clearly indicate we are far from achieving this anytime soon.

Some have also voiced fears that such a mechanism would permanently disrupt sovereign debt capital markets. Indeed, one can imagine investors would think twice about lending to countries with a history of institutional instability, causing their financing costs to skyrocket. This assumption is explained by the fact that debtor countries might want to use the odious debt as a stick to force creditors into restructurings following government transitions.

On May 23, 2017, Petróleos de Venezuela SA (PDVSA, Venezuela’s public oil company) issued bonds, a majority of which was purchased by the asset management arm of Goldman Sachs (GSAM). Bonds were issued at a deep discount, 31 cents on the dollar – GSAM paid USD 865m for USD 2.8bn in face value – raising questions about the investors’ recovery strategy in the event of a restructuring.

In the following day, central bank data indicated a sharp jump in international reserves in Venezuela, roughly the size of the bond transaction, indicating that the government most likely used PDVSA as a smokescreen to issue debt and avoid sanctions.

Three days later, on May 26, 2017, Prof. Ricardo Hausmann, former Venezuelan minister and Harvard economist, published an op-ed calling on JP Morgan to exclude the country’s bonds from its EMBI+ index, in order to remove access for the Venezuelan government to important liquidity pockets and raise its financing cost.

While Ricardo Hausmann did not target GSAM’s bond indentures in particular, this resulted in a perfect storm with demonstrations in front of the Goldman Sachs HQ, public uproar and a lot of negative press coverage from the FT, NYT, Bloomberg and others.

In their paper, Panizza and Gulati regress the spreads of those specific bonds and other indentures against a set of dummies related to events such as the Hausman op-ed or declarations of US officials. They show that heightened reputational risk does translate into a significant penalty for those specific “Hunger Bonds” (the PDVSA indenture), even when including the spread of several other bonds in the regression to control for shocks affecting the total debt stock.

Interestingly enough all events – even those positive for the Hunger Bonds such as the exemption from sanctions – led to a spread increase, as if simply being mentioned would worsen the reputational risk of these bonds. In the last part of the paper, Panizza and Gulati report an off the record exchange with investors: most of them indicated that they did not want to invest in Hunger Bonds mainly because of the reputational risk, and partly because they feared GSAM holding a majority stake would penalise minority holders in the event of a restructuring. They also believed that those bonds had a higher risk of repudiation should a restructuring take place.

Panizza and Gulati draw a parallel with an article by Collet and Osterlinck (2018), which tells the story of Maxim Gorky, who at the beginning of the 20th century brought a Tsarist Russian bond issuance in Paris into the limelight of the French political debate. As with the Hunger Bonds, the uproar that followed caused a significant price penalty on the bonds, hence the name “Hausmann-Gorky effect”.

Finally, the authors conclude that while the popular uproar and reputational taint obviously played a part, it appears that the price penalty is strengthened by the apparent irregularities of the specific transactions, raising the risk of selective repudiation. This would explain the different treatments of the Hunger Bonds compared to the rest of the debt stock.

From Venezuela to Belarus

The case of Belarus is of course fairly different: protests started only a few months ago and we are not yet witnessing a humanitarian crisis. Nonetheless, the legitimacy of the regime was already questioned in the run-up to the elections, with intimidation tactics deployed against the main political opponents. Notably the main opponent to Alexander Lukashenko, Sergei Tikhanovsky, was imprisoned in May 2020, two days after declaring he would run for the presidential election.

Despite such actions, on June 17, 2020, the government was able to issue a USD 1.25bn dual-tranche Eurobond on the London Stock Exchange, with tranches maturing in 2026 and 2031. Citigroup, Raiffeisen Bank and Société Générale CIB acted as Joint Lead Managers (JLM) and Bookrunners, while Renaissance Capital was JLM only. The issuance was rated B by S&P and Fitch, and not rated by Moody’s which maintains an unsolicited rating of B3 for Belarus, according to the issuance prospectus.

On August 26, 2020, Mike Butcher, an editor at Tech Crunch, tweeted the following:

Subsequently, a demonstration was organized on September 3 at the London Stock Exchange, gathering 50 people asking for the delisting of the bonds. It is worth noting that the demonstration got limited media coverage, with only one article in City A.M., a free business newspaper distributed in London, compared to dedicated articles in international media outlets for the Hunger Bonds.

On September 23, another demonstration gathered a few dozen activists outside Citi’s HQ, which did not get press coverage by the time of writing this blog post. The protest focused on the role of Citi as “Stabilising Manager”, as stated in the issuance prospectus, which meant that the bank would actively trade the securities in the 30 days following the issuance.

It remains unclear at this stage if this popular movement will gather traction and achieve significant goals such as a price penalty or even the delisting of the bonds . The transaction itself is overall less suspicious than the Hunger Bonds as (i) it was issued officially by the government rather than through a smokescreen, and (ii) it was not issued at a deep discount, with a price of 98.799 cents and 100 cents on the dollar respectively for both tranches. This reduces the risk of repudiation that scared investors with the Hunger Bonds. Also, there is no comprehensive data on secondary market holdings, but nothing indicates one investor would hold the bulk of those instruments alone.

No suspicious movement was observed on the market for these June 2020 indentures, which represent only a small fraction of the overall traded debt stock estimated by Reuters at a total USD 7.6bn across currencies. The two bonds experienced a small drop in price on August 17, in line with other Belarusian bonds, and have in general traded far from distressed territories.

It seems that for now the confrontation will remain on the diplomatic battlefield: on September 24, the EU stated that Lukashenko is not the legitimate President of Belarus, and so did the US. As shown in the case of the Hunger Bonds, things can move quickly if all actors contribute to the creation of a “perfect storm”. On October 12, the Wall Street Journal reported that the EU would target Lukashenko with a travel ban and asset freeze, while the EIB will review its operations in the country and most probably scale back financing operations.

It will be interesting to watch any new issuance attempt by the Belarusian government. If it effectively loses market access, it might have to turn to financing tools with less transparency and accountability, such as bilateral loans from its last allies such as Russia. So far, the Russian ruble accounts for only 5% of the Belarusian traded bonds and loans according to Reuters, compared to 62% in US dollars, 18% in euros and 14% in local currency.

On September 14, President Putin announced it had granted a USD 1.5bn loan to Belarus, hereby showing his support to the embattled regime. This covers little more than the USD 1.2bn in rollovers by the end of the year according to the Belarusian Research and Outreach Center (BEROC), and it was already announced that USD 330m of the Russian loan would be earmarked to service debt to Russian oil giant Gazprom.

Going forward, as Panizza and Gulati put it, a relevant way to advance towards a working solution to the Odious debt problem, despite a lack of legal doctrine, would be to develop a comprehensive database of potential legal infirmities of bonds issued by questionable regimes – such as the absence of parliamentary approval – in order to raise investors’ concerns about repudiation risk and reach the goal of increasing the regimes’ financing costs.