Home > How pop culture has become a refuge for queer children

How pop culture has become a refuge for queer children

How pop culture has become a refuge for queer children

In 2013, during the French protests against marriage equality, queer philosopher Paul Préciado asked, in an article for Libération:

Xavier Dolan’s 2019 film, The Death and Life of John F. Donovan, released mid-March in France, reminded me of these words. The film talks about the importance of popular culture and its impact on queer youth, those who feel excluded by society’s rigidly defined gender norms.

The story of Rupert Turner

The film revolves around the correspondence between John F. Donovan, an actor in a hit American series, and Rupert Turner, a young student who has just moved to the suburbs of London with his mother after his parents’ divorce.

The story is set in the early 2000s, a time when American TV series began to exert great influence over youth culture worldwide.

Trailer, The Death and Life of John F. Donovan.

This unorthodox friendship is shown largely through the eyes of young Rupert, who is bullied by his peers at school but holds fast. He finds resilience in his friendship with the actor, and in the series. But he also finds strength in his outlandish hope of, one day, acting side by side with Donovan. While it is never explicitly stated that he is in love with Donovan (and does it really matter?), Rupert finds the strength to subvert the gender norms that imprison boys and girls in stereotyped roles.

Rupert is a fugitive from reality. For years he maintained an active correspondence with a Hollywood actor, which is no small feat. His overactive imagination stimulates the real world. He lives differently; he’s not like other children. Rupert is a queer child.

Queer children show us the way; they break through boundaries. They are imagining a new world, different from the gender and sexual conformity all children are subjected to – a poetic world, in the words of Michael Warner. 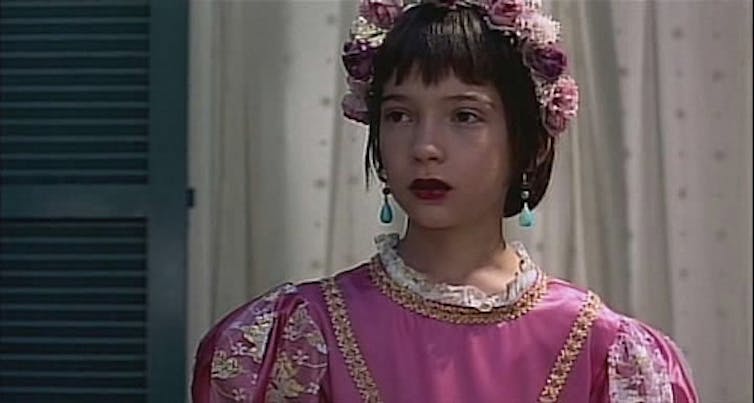 A still from My Life in Pink by Alain Berliner.

At the beginning of the film, when Rupert starts to watch the latest season of Donovan’s series, his euphoria recalls the outpouring of longing experienced by all children who do not fit in. To paraphrase Judith Butler, it is the performative act of an alternative masculinity.

Oppressed in the ordinary institutional contexts that govern their lives (school, family, religion, peer socialization, etc.), queer children create imaginary worlds, fantasize, invent new languages and imaginary friends, rebuild the world and come up with their own ideal society. They are able to do so precisely because of their own excesses, the ways in which they transgress gender norms.

I too was once like Rupert. At six, I idolized Greek pop icon Anna Vissi. She introduced her country to new musical styles, mixing western pop with eastern rhythms, and gave spectacular concerts in Athens. She was the pop super star of the 1990s and early 2000s. I bought her CDs, danced to her clips, imagined myself singing her songs – alone or with her, for her. Vissi enabled me to live, helped heal my psychological wounds when my classmates called me a “fag”.

I went as far as to apply for a game show that granted viewers’ wishes, asking to meet her. When sexist rumors began to circulate about her, accusing her of “perverted” sexual practices, I stood up for her, knowing that, one day, those same words would be applied to me.

During my school years, I suffered casual abuse for reasons that were never explained (though I knew very well). My parents and friends turned a blind eye – even though my mother taught at my school – but Anna Vissi was always there for me. She was my companion and support through those years.

When I began moving in other circles, and rubbing shoulders with the intellectual “inheritors”, students of the universities where I studied – private school students all, and well versed in “real” musical culture – I hid my admiration for Vissi. She was too commercial, too lowbrow, too different from the artistic icons recognised by the standard-bearers of heterocentric bourgeois culture who dictated what I should be listening to be one of them.

But I didn’t want to be one of them. I wanted to get away from them just as I wanted to get away from my family. There was no place for me in my family or in the “hetero intellectual bourgeoisie”. Anna Vissi showed me the way, without speechifying, without taboos or limits. She was always there for me: when I went to the opera, when I started amateur theatre, when I read Genet. I may have turned my back on her, but she never did.

Dolan’s film speaks to all queer people, to all those who do not fit into predefined, imposed gender roles, to those who dream of a different world and want to make it a reality. More than simple dreamers, queer children are actually building the world they want to live in, here and now.

In a world where culture crosses national borders, we can dream up new kinds of masculinity and femininity through new hybrid models, and fall in love with new pop icons who open the way for new constructions of desire and new possibilities.

Rupert eventually grows up and finds his way. Unfortunately, such is not always the case for queer youth. To become adults, children – queer or not – must first survive, using strategies and alliances, occasionally with friends or family members, but sometimes with their own John F. Donovan or Anna Vissi.

Konstantinos Eleftheriadis is the author of the book “Queer festivals: Challenging collective identities in a transnational Europe” (Amsterdam University Press, 2018).

Translated from the French by Alice Heathwood for Fast ForWord.