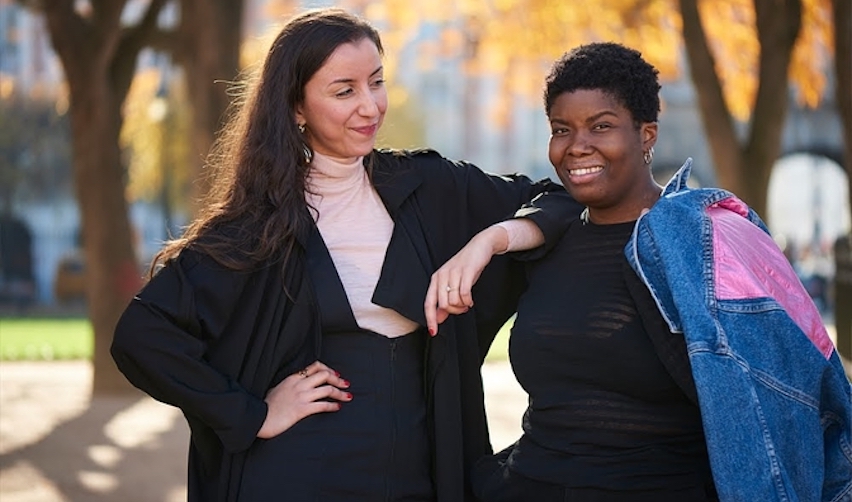 What made you decide to start up a business producing period-proof underwear?

Fanny Abes: Claudette and I started out by thinking how we could help people. It was only in the second phase of development that we really thought about problems specific to women. I think that it was only natural that we were drawn towards a venture aimed at people like us, people who share the same needs. We released a product linked to menstruation to help women reconnect more positively with their bodies, their biology, and their cycles. The goal was to turn the tables: to no longer just put up with our bodies, but rather, to better understand and make them our allies. Today that has happened through creating period-proof underwear, but it could take different forms in the future.

Claudette Lovencin: Creating period-proof underwear was about creating something relevant to women, or at least menstruating women, so perhaps our business has feminist ends at its heart. But we don’t want to be simply put into that box, it is more about finding autonomy.

Fanny: Yes, we prefer to talk about regaining autonomy as a process of conquest.

Claudette: Today we have created period pants but our project’s philosophy is to allow us to better understand our bodies, as they are, whatever their needs may be. We were not looking to take a political stance by doing this, even if it might be seen as a feminist, or even a humanist matter.

Fanny: What we are looking to do today with FEMPO is to give individuals the means to emancipate themselves. But that has not stopped us from seeing that there are collective political and societal battles still to fight.

How did your internships at Sciences Po help in the development of your product?

Fanny: Maxime Marzin, the head of Career Services, helped us a lot. He gave helpful advice on our project and that helped us to structure and launch FEMPO.

Claudette: I minored in gender studies at the University of Concordia. I gained two years of experience there and then I started my Master’s in public policy at Sciences Po with the strong academic background from my time in Canada at the Société Elizabeth Fry, which helps marginalised women.

A few months ago, Sciences Po launched a committee for women entrepreneurs, led by Anne Boring. Has tackling something which targets a solely female market helped you as female entrepreneurs?

Fanny: I think that being women and responding to women’s needs at the same time added credibility to our project. The way I see it, being a woman today doesn’t restrict you in any way. Of course, we had our fair share of problems, but whether that was because we were women or just young and starting out in the sector, I don’t know. Anyhow, I personally didn’t feel discriminated against because of my gender.

Claudette:  I agree, it is difficult to say. It is a bit complicated nowadays to isolate the reasons why such problems do or don’t occur. Often female entrepreneurs say that they have trouble getting financial backing, but we have been pretty lucky. I think that the original nature of our project worked in our favour - we didn’t go unnoticed. Today I encourage anyone who wishes to set up a business to take full advantage of the help and the tools offered by Sciences Po. Fanny and I started out with next to nothing; FEMPO originated from very humble beginnings.

Fanny: Yes, we started out with 250 euros and my mother’s sewing machine.

Claudette: I am convinced that you should back your own ideas and see your idea through to the very end so that you know what it might lead to. You have nothing to lose by trying!

Learn more about starting a business:

My Coral Garden: A Start-Up Made in Sciences Po Aims to Save the Oceans

“After ten years in banking, I wanted to do something good enough to put my name on”

The Dean of the School of Public Affairs and Professor of Economics Yann Algan has accepted a position at HEC Paris, where he will work as Associate Dean for the Pre-Experience Programme and continue his research into trust and cooperation in organisations. He will thus leave his position as Dean of the School of Public Affairs from the start of the 2021-2022 academic year. In February, he answered our questions about the School, taking us on a tour of the newest elements of a historic curriculum.