Home | News | “It’s no longer a question of ecology, but of civilisation” 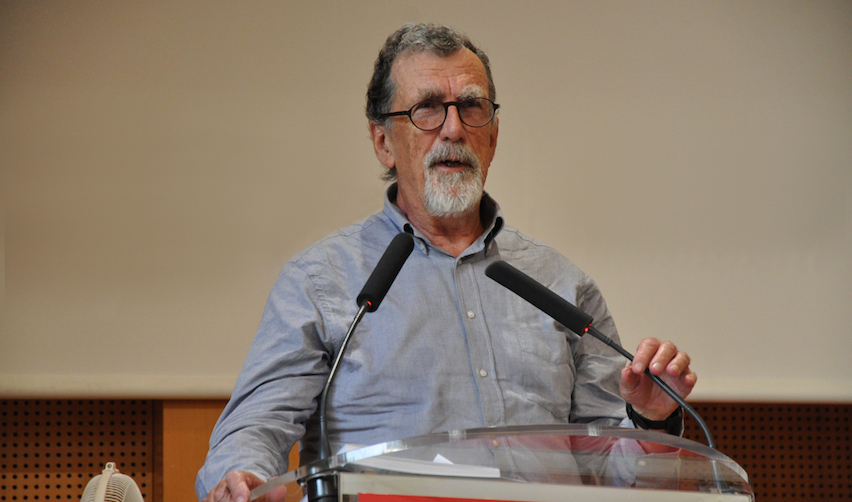 "One of a kind and indispensable": these are the terms FNSP President Olivier Duhamel used to welcome Bruno Latour to the podium of the Boutmy amphitheatre in September 2019, at the start of the 2019-2020 academic year. Latour, the celebrated philosopher and anthropologist, proceeded to deliver a powerful lecture on the urgency of the environmental crisis. How can we measure the change our planet is undergoing, and how can we respond to it? Here is a recap of a key moment of this past year's back-to-school season centred around climate and ecology. #KeepLearning.

Bruno Latour is worried, and, he is sorry. Worried about speaking to “aliens born in the 21st century” and sorry to convey the “unpleasant” message on the “great acceleration" for which his own generation is responsible and from which it “benefited wonderfully".

These "aliens", or first-year undergraduate students, do not seem to hold him accountable. They are immediately hooked by the orator’s compelling words that mark their educational debut at Sciences Po. Many are discovering the name of the "philosopher, sociologist, ethnologist, epistemologist, numerologist, and ecologist" for the first time; the leading scientist is perhaps less known in France than anywhere else in the world. Bets are, they will not forget his name anytime soon.

"None of your predecessors at Sciences Po had to worry about the consequences of human activity on Earth", said Bruno Latour. "Earth" refers to "this thin film of space humans occupy at the surface of the globe." This is a surprise, unprecedented and unheard of, that is occurring at an unimaginable speed. Welcome to the Anthropocene, the era in which we shall "measure human activity and the Earth’s system’s reaction to it". For Latour, this is a revolution, and one that is at least as important as Galileo and Copernicus’ discoveries. The change we are undergoing is so colossal, and on such a large scale, that it exceeds graphs. It exceeds the limits of our minds.

Climate: From Awareness to Action from Sciences Po on Vimeo.

And yet... and yet, the Earth is affected. The weight of the human footprint has surpassed what the biosphere can bear. This is a scientific fact. It is well documented, robust, attested, sourced, and quantified. "But the problem we have to face is that every day we are confronted with dramatic alarms in the media, and yet, the world quietly follows its course," says Bruno Latour, comparing this contradiction to the "phony war" of the 1940s. "How can we take in this question that is no longer one of ecology, but a question of the survival of civilisation?”

The "Phony War" for Climate

The first war, he says, is the fight against "the corruption of the public sphere", which reduces scientific facts to opinions and vituperations. Latour asks students to filter these "floating statements", source them, attribute them to their authors, and put them back into context. The first step to survival is the survival of the truth.

Finally, it is the role of this generation born in the 21st century, and especially the role of Sciences Po students, to take this responsibility that is also an opportunity to seize: to reinvent policy and institutions that this new climate regime demands. "I’m sorry, I cannot tell you that everything is going to be alright," concludes Bruno Latour. With mixed expressions of gravity and exaltation, the "aliens" swept their fears aside and rose to give Latour a long, standing ovation.