An exceptional guest at the School of Management and Innovation

Anders Sandberg is Senior Research Fellow at the Future of Humanity Institute at the Oxford Martin School, University of Oxford. His research centres on societal and ethical issues surrounding neuroscience, human enhancement and new technologies. Stream his keynote speech, ‘Making better intelligence: attempts at imitating or improving biological intelligence, and what we can learn from them’, at the School of Management and Innovation.

From the Master in marketing et études

After receiving her diploma, Meggy Pyaneeandee, 2018 graduate of the School of Management and Innovation and Miss Île-de-France 2016, wrote a heartfelt letter to Sciences Po. Read her story.

It was very important to me to express my gratitude for these last six years.

After receiving her diploma, Meggy Pyaneeandee, 2018 graduate of the School of Management and Innovation and Miss Île-de-France 2016, wrote a heartfelt letter to Sciences Po. Read her story.

It was very important to me to express my gratitude for these last six years.

Six years ago, a panel of three people decided to make me a student at Sciences Po. Without knowing, these admission officers changed my life. Sciences Po was my first dream come true. I was admitted via the CEP (Convention Education Prioritaire) (fr.), which, as Richard Descoings had so well understood, was a necessity. A necessity because to study in a ZEP (Zone d'Education Prioritaire) is nothing less than a daily battle. Yet, a battle for education is one of the greatest battles, because it is what arms us for the rest of our lives. Our university has proved that to me over and over.

I grew up with a builder as a father and a mother who was illiterate upon arriving in France. Like many immigrants, they came to France hoping to live in better conditions. They left the sun of Mauritius to settle for a little Parisian studio. For 13 years, we lived in 10 square meters. My parents clung to the hope that this country they had chosen was one that would offer their children everything they had never had.

So, I could not begin to explain how much my acceptance into Sciences Po was a joy, an achievement and a source of pride for my parents. Everything they had worked for and all the sacrifices they had made became meaningful when they saw me enter through the doors of the 27 rue Saint-Guillaume. You offered me the life I always used to dream of. A life full of encounters, journeys, lessons, experiences, culture, and an opening out onto the world.

I arrived as a young stranger from the outskirts of Paris, ill at ease in my own skin and struggling to find my place in the world. At Sciences Po, I not only found that, but became aware of my capacity to change it. More than a university, Sciences Po became a home, sometimes a refuge. I grew up in here. I gained self-confidence, I met some of my best friends, many of whom I am sure will be by my side for the rest of my life. I got to live in New York thanks to Sciences Po’s financial aid system, which allowed me to work there without getting into debt. A second dream come true. 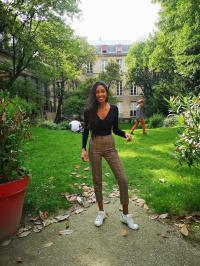 You allowed me to socialise with students from backgrounds completely different to my own. You allowed me to participate in the Miss France competition, representing in my own small way the minority group I come from. You gave me so much, without ever asking anything in return, and I don’t know how to thank you all.

I have countless reasons to be grateful for this life that you have offered me, which is ultimately nothing less than the basis for the rest of my existence.

Sciences Po is a unique university. Its teachers, its values, its history, its structure, its students, its diversity, its magic, make for an experience that is unique to every one of us. We are all so different and yet each of us finds our own place here. We are all so different, yet we manage to form a single and united body, that of a class of Sciences Pistes, proud to call ourselves this way.

I have had to interrupt the writing of this letter many times to dry my tears. It’s with a heavy heart that I say goodbye to you. I know that us French people love to grumble, but sometimes it is good and necessary to express one’s love and one’s gratitude.

French, Mauritian, Parisian, Outsider, Sciences Piste,
With love to you all and many thanks,

For its first year of existence, one of the objectives of EMI was the introduction of active and innovative learning techniques in their course offer. In this framework, a climate negotiation was successfully organized in Professor Eloi Laurent’s course “Political Economy of the Environment-Managing our ecological crisis”. Based on the promising student feedback on the exercise, the simulation has laid the first stone for more innovative learning approaches to come.

The simulation was organized in Eloi Laurent’s course “Political Economy of the Environment – Managing our ecological crisis” with the support of Sciences Po’s FORCCAST program (Marine Denis), specialized in the study of scientific controversies and the simulation of debates and negotiations.

The course was attended by nineteen students coming from all master programs offered at EMI, namely Finance & Strategy, Communication, Marketing and Human Resources. The different academic profiles of the participants were a valuable input to the simulation exercise.

The participants endorsed the role of five country-based delegations (China, the US, the EU, the UN and Fiji). Each of those delegations was composed of a set of actors representing the strategies and interests of the private sector, the civil society, the government bodies and experts. Their objective was to renegotiate the Paris Agreement based on their strategic alliances and interests.

By doing so, the simulation pursued a dual pedagogical goal: First, it aimed at fostering a better understanding of the geopolitical issues on climate change; second, it gave students the opportunity to acquire, next to the thematic course content, the necessary practical negotiation techniques, which prepare them for real-life situations.

Organization and Progress of the Simulation

Integrating a simulation in a course on Political Economy is a challenging task both for the teachers and the students. Indeed, the course design has to take stock of the simulation as an integral part of the evaluation process. For students, courses with simulation exercises require some additional time investment, notably for the drafting of position papers and for setting up strategic group meetings outside the classroom.

The simulation opened with a press conference, which was organized the week before the actual first round simulations, where delegations presented their position papers. The press conference was an interesting way to make students dive into the simulation and its exigency. More specifically, students were confronted with the questions from real life experts posing as journalists invited by the FORCCAST team.

The courses of the following two weeks where dedicated to the two negotiation sessions on mitigation and adaptation respectively. Both adopted an innovative approach to climate justice, in line with the research conducted by Professor Eloi Laurent and the lectures offered beforehand to students.

To render both simulations more lively and realistic, Marine Denis and Isabel Ruck (from the FORCCAST program) aimed at introducing certain unsettling elements into the negotiation process forcing participants to review or realign their previously established agendas and strategies. The simulation exercise also used the channel of social networks (i.e. Twitter : @Simuecocrisis) to diffuse the actors’ positions and opinions.

In this perspective, it was interesting to note how a tweet from the United Nations representative put the previously established inter-delegation harmony into question and forged participants to adopt completely new approaches. This disruption also allowed some positions to emerge more clearly, such as the private market interests in the transfer of technology and insurance mechanisms to reduce climate change disaster risks, the growing political power of megalopolis or the influence of fake news on decision-making. The simulation has equally permitted students to uncover the informal side of climate negotiations, as well as the transcalarity and interconnectedness of the various debates that took place.

“First, lectures enabled us to acquire a strong theoretical background on environmental issues, through an economic, social and political standpoint. The course stresses the importance of interdisciplinary dialogue and cooperation to tackle climate change, showing how environmental conservation is key to achieve justice and development. Furthermore, the innovative pedagogy was crucial to get students involved. It enabled us to develop our critical thinking on our own through our group position papers. At the end of the course, we were engaged in an interactive debate masterfully orchestrated by teachers, allowing us to enrich our perspectives on real-world situations where pressing environmental concerns are deliberated on. All the students really enjoyed the role play during the simulation, where different parties were represented (private, public, NGOs actors were played by students, while press was represented by teachers; even civil society was present through a Twitter account created for the occasion). We all appreciated this new pedagogy that enabled us to interact with other students, and understand better the difficulties of discussing climate change mitigation and adaptation at an international scale.

The lectures were really inspiring and the negotiations simulation was very stimulating for us. We are all thankful for this amazing learning experience we had!“

“The Political Economy of the Environment class is a unique occasion in the Sciences Po curriculum to immerse oneself in the world of climate negotiations and get a solid understanding of the political, economic and ecological challenges related to them.

The structure of the class allowed us students to both learn and understand: the first sessions of in-class traditional teaching  supported by tutorials and professionals presentations gave us the tools as well as the theoretical and technical grounds to analyze ecological crises related problematics. On the other hand, the draft of a position paper by delegations, the presentation of this position during a press conference and finally the debate around each delegation’s propositions to amend the Paris Agreement on climate change was a chance for us to really get in the shoes of international climate negotiators.

The innovative aspect of the class lies in this format’s capacity to get us involved in a character’s position thus leading us to a deeper understanding of the challenges related to ecological crises and the way they are managed. Also, it encouraged us to think of concrete solutions to these crises under the constraints of an international negotiation process and taking into account our respective character’s interests.

I particularly enjoyed researching and understanding the context and interests of my character’s position in order to fit as much as possible with the country’s actual position. Also, I appreciated the efforts deployed to recreate the experience of a real negotiation around the simulation. It involved for example the active participation of guests acting as journalists during the press conference or even the use of Twitter to develop the debates and negotiation evolution during and after the the simulation sessions. It has played a crucial role in the immersive learning experience that the class created.“