Resisting the multicultural backlash in the UK

In November 2021, a culturally diverse school in the South-Western English city of Bristol launched a new ‘One Bristol’ curriculum designed to recognise the contributions of ethnic minorities to the construction of contemporary Britain. Attended by black Bristol mayor Marvin Rees, the event was covered in a highly positive way by the state-funded British Broadcasting Corporation (BBC), which has an official mandate to reflect and serve all ethnic groups in the country. By bringing together the efforts of local and national organisations, the event and its coverage brought to light the multi-level nature of post-migration diversity governance in Britain and the other countries studied as part of the PLURISPACE research project. The initiative also suggested that, despite several commentators proclaiming its death or at least its retreat, the multiculturalist principle of reshaping the national identity in a more inclusive way still has the strength needed to drive progressive policy reform.

Over the past two years the PLURISPACE team has looked beyond the news and delved into policy documents and civil society discourses to see whether the same could be said of three of multiculturalism’s rival pro-diversity paradigms, namely interculturalism, cosmopolitanism and transnationalism. To probe into interculturalism, the team has asked whether policymakers and grassroots organisations supported greater contact between ethno-racial minorities and with the white majority, as a way of improving inter-group attitudes. To evaluate cosmopolitanism, it has observed how open stakeholders were to movement across national borders and to the protection of the rights of foreign nationals. To assess transnationalism it has enquired into their willingness to facilitate migrants’ simultaneous participation in their countries of origin and settlement. More specifically it has asked whether support for these philosophies was a zero-sum game or whether it could co-exist within single organisations.

UK findings decisively point toward the latter hypothesis. At the national level, for example, the government’s Integration Strategy published in 2018 manifests a clear intercultural sensitivity, promoting measures such as a Linking Network for schoolchildren to meet across ethno-racial lines, a National Citizen Service for youngsters to mingle while serving the community, and a Near Neighbours programme to train diversity leaders and foster exchanges on the topic. At the same time, the Strategy also comprises anti-discrimination initiatives that would fit equally well in a multiculturalist framework. These include two Hate Crime Action Plans adopted in 2012 and 2016, one of whose components is funding for Tell MAMA, a service to report incidents of anti-Muslim hatred and support victims. They also include a Cross-Government Working Group on Anti-Muslim Hatred (albeit one that has been criticised for its lack of activity), a Race Disparity Unit which collects and disseminates statistical data on ethnic inequalities through a dedicated website, and a programme to improve the governance of faith institutions and increase the diversity of their boards.

Multiculturalism and interculturalism also combine in Bristol policy. Reflecting the interaction between national and local diversity frameworks, the city’s 2018 Equality and Inclusion Policy and Strategy commits to respecting ‘both the letter and the spirit’ of the Equality Act 2010, a landmark piece of national legislation prohibiting discrimination on the grounds of race, ethnicity and religion, among others. The Equality Act places a duty on public authorities to have due regard to the need to 1) eliminate discrimination, 2) advance equality of opportunity, and 3) foster good relations. One tell-tale indicator of Bristol’s commitment to the duty has been the creation of Council-funded ‘equality fora’ to voice the needs of specific groups and the setting up of a Commission for Race Equality to develop targeted action plans in relation to a range of policy areas.

Alongside these centrally influenced but locally implemented multiculturalist measures sit more interculturalist statements foregrounding the goals of building ‘understanding between people’, community cohesion and shared values. Unlike the national government, the city of Bristol also promotes a mixed cosmopolitan and transnational outlook which foregrounds citizens’ international connections as an asset when it comes to seizing the opportunities of globalisation. In this sense it is noteworthy that it produced in 2017 a specific policy document on this topic, entitled Bristol Global City, according to which sovereignty should be rebalanced from national to local governments to enable direct dialogue between cities and give them a stronger voice at national and global levels. Another hint of Bristol’s cosmopolitan leanings can be found in its efforts to join the Cities of Sanctuary network by funding local organisations which support asylum seekers and refugees, recognising the latter’s skills and experience and thereby easing their transition into work. The city Mayor has declared that all migrants from the EU are welcome and are citizens of Bristol. 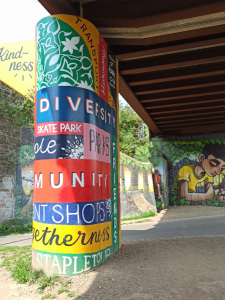 Most of the anti-racist and ethnic organisations interviewed did not seem to have any problem in simultaneously endorsing multiculturalist, interculturalist, cosmopolitan and transnationalist positions either, notwithstanding the fact that one or two of these perspectives tended to predominate in their discourse. The most common pattern was a mix of multiculturalist and interculturalist views, and several organisations suggested that both cosmopolitanism and transnationalism were less relevant to their diversity-related work. This being said, interviewees had a lot to say about the inadequacy of the reception system for asylum seekers, which one characterised as condemning people to ‘survive rather than thrive’. Respondents were divided on the wider cosmopolitan issue of human mobility writ large, with some of them supporting a universal right to freedom of movement and others defending current international law and national sovereignty.

All in all, then, the analysis of UK policy and civil society discourses suggests that they remain shaped by all four diversity perspectives studied by the PLURISPACE team, and that these perspectives have been resilient to the so-called ‘multicultural backlash’ announced over a decade ago. In the European context, what remains to be seen is whether pro-diversity agents will continue to stand firm against the rise of the far right, of which the strong performance of the National Rally in France’s 2022 presidential elections has recently offered yet another reminder.