Liberté, Égalité, Fraternité – Yes, but for Whom ?

France is known worldwide for its motto of Freedom, Equality and Fraternity, the historical maxim that, since the French revolution, marks the principles that guide the country and its inhabitants. Due to this strong rhetoric that assumes that France is a model of equality and universalism, it is quite common to hear from politicians, but also among the population in general, favourable opinions about meritocracy – that is to say, the idea that everyone is entitled to the same opportunities, you just have to work hard to achieve your goals. Based on such universal values, the distinction of people according to origin, race and religion is not allowed in France and, except for a few special cases, the conduct of surveys on ethnic and religious profiling is prohibited. Such a difference-blinded approach is supposed to ensure equality of all before the law, and, therefore, in social life. Nevertheless, it also creates obstacles to the fight against discriminations: after all, how do we fight an issue that supposedly does not exist?

As a researcher at the PLURISPACE project, I had the chance to talk to some representatives of civil society working in France at national and local levels in order to listen to their opinions and ideas related to the management of diversity in public spaces. During these exchanges, the motto of Liberty, Equality, and Fraternity was constantly mentioned by different informants – having a migrant background or not – as a way to prove that everyone should have the same rights. Nevertheless, most of the participants claimed that they suffered or have seen different kinds of discrimination and some minority groups are not treated in the same way, showing that there is a mismatch between the rhetoric and the praxis. Still, always based on the value of equality, some informants echoed the official discourses referring to merit, affirming that France is a country of equal opportunities. Based on such principles, there was a lot of criticism regarding the hypothesis of implementation of ethnic and religious statistics, as well as policies targeted to specific minority groups.

However, it was interesting to notice that even the informants that most rejected the implementation of affirmative actions to targeted groups agreed that the recent quota system implemented to avoid gender gaps in enterprises has shown positive results. In that sense, there is a contradictory discourse since, on the one hand, most of the representatives of civil society interviewed believe that the access to rights should follow the republican motto and be equal to all, without privileging any specific group. On the other hand, when affirmative action is implemented to reduce gender gap, they are perceived as positive, since, after such action, there is more equity among women and men at work. 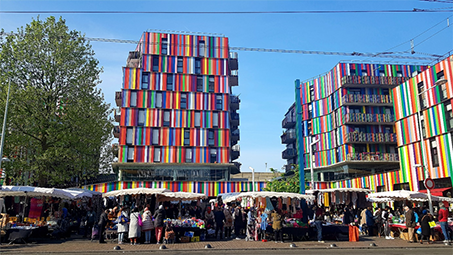 A street market at La Courneuve

How then to manage diversity in public spaces? Which approach to putting into practice the republican values of Equality and Liberty?

As multiculturalism is mistakenly associated with segregation and communitarianism, such approach has been rejected by almost all participants, who tended to prefer a more intercultural perspective, focused on social cohesion and ‘living together’. Nevertheless, the idea of having a hyphenated identity – that is to say, to keep two or more identities, as French and Moroccan for instance – seems to be a natural path for immigrants and their descendants.

Moreover, if, on the one hand, the discourse of equal rights can be related to a cosmopolitan approach – as it is based on universal rights -, two main distinctions can be noted. First, the idea of equality that reverberates in France remains rather in the rhetoric level, since the abolition of discrimination and real implementation of equal rights and opportunities are still far from reality. Secondly, when it comes to the level of governance and the concepts of identity, cosmopolitanism goes beyond the nation-state, preferring a global perspective. In France, however, there is an attempt to achieve a single identity focused on the nation-state: a French identity. Besides, I would say that such French identity is even restricted to the metropolitan area, as the overseas territories are often not included in this French imaginary.

A transnational approach, based on relations of solidarity among nation-states is not to be neglected either. Many participants in fact affirmed that keeping the bonds with their home countries can be an asset to integration in the country of settlement, as they can better understand their place in the world. In addition to that, the maintenance of these relations with the country of origin, as well as diversity in general, was pointed out as a form of cultural and even economic enrichment.

Considering these four perspectives to the management of diversity in public spaces – multiculturalism, interculturalism, cosmopolitanism and transnationalism – we can conclude that a single approach cannot cover all the complexity that this issue demands. In fact, perhaps one solution might be a hybrid approach, in which there could be social cohesion and at the same time each individual could keep their specific identities and links to the country of origin. In this way, having universal rights as a basis, perhaps then merit could be a fair way to evaluate performance and we would be able to affirm that the principles of equality and freedom are indeed for everyone.